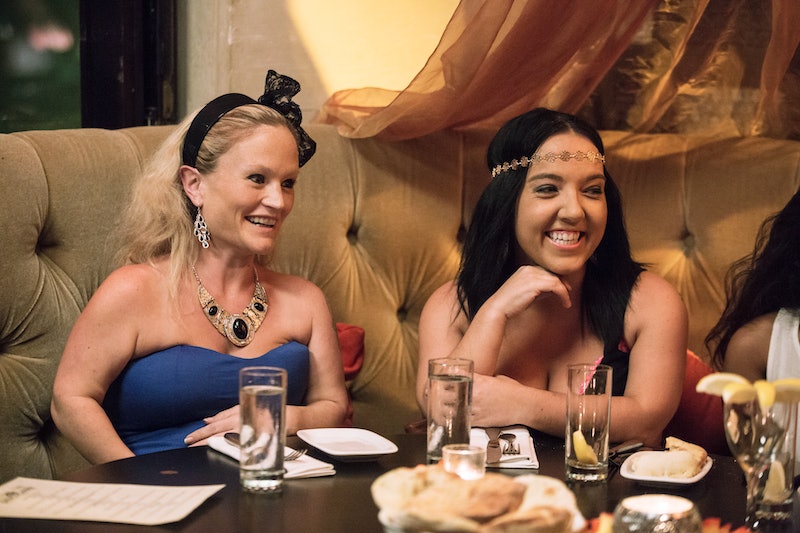 There are a few new cast members who will be added to the cast of Lifetime's East Coast edition of Little Women when the second season premieres. One such newbie is Little Women: NY 's Katie Snyder, who will be joining the group. The most interesting thing about Katie is that she's at a major, major crossroads of her life right as Season 2 of LW: NY is about to start. According to her Lifetime blog, Katie just moved back to New York City, and she's facing some major life changes on the horizon, so there should be plenty of tears and emotional breakdowns in her TV future. I don't think Katie is going to be a neutral addition to the cast — I think she'll be bringing a great deal of excitement to the table.

As I'll elaborate further below, Katie's romantic relationship could be a source of conflict, especially since queen bee of LW: NY, Lila Call, is single and wondering if she'll ever be able to settle down and start a family. (The married mothers on Little Women: LA often clash with the rest of the group.) But outside of her role in the group, Katie is going to be an interesting addition to the show — she's at a pivotal point in her life and it should be exciting to watch her figure it out.

So not only is Katie dealing with a move to one of the most expensive and overwhelming cities in the world, she's also doing so while expecting her first child. That's a serious challenge, especially, since one of the trailers suggests that she may have some complications.

Her Relationship Status Is Complicated

According to Lifetime, Katie's relationship with boyfriend, PJ, has been in limbo for the last six years. Usually after that much time, a couple has made a decision about whether or not they want to stay together, but PJ is still conflicted about whether or not he wants to go to New York with Katie or stay in Seattle to work on his music career.

But There Might Be A Proposal In Her Future

On Little Women: LA, there's been quite a few surprise onscreen proposals, and maybe PJ will decide that he wants his relationship with Katie to go down a more conventional path, instead of a long distance on-again, off-again relationship.

She Was Once A Wrestler

A pre-pregnancy Katie used to be a competitor in the Micro Championship Wrestling little person wrestling circuit. Her persona in the ring was the Trixie Dynamite, a fierce fighter who worked with famous wrestler Hulk Hogan.

She's Struggled In The Past

In an article by The Herald of Everett in Katie's home state of Washington about her past as a little person professional wrestler, she opened up about how she physically struggled with being a little person and suffered bullying from classmates. "One thing I remember (as a younger girl) was the way kids would laugh and point at us. I didn't like that. I mean, who wants to be made fun of?" she told the paper.

Jessica, who was also once a little person wrestler, is Katie's closest friend in NYC. She might not have a ton of extra time available to be there for her friend while her own life is super tumultuous. In the trailer, Jessica offers to be "Baby Mama number 2." It's a super sweet gesture, so I hope this friendship remains unscathed by Little Women: NY Season 2.