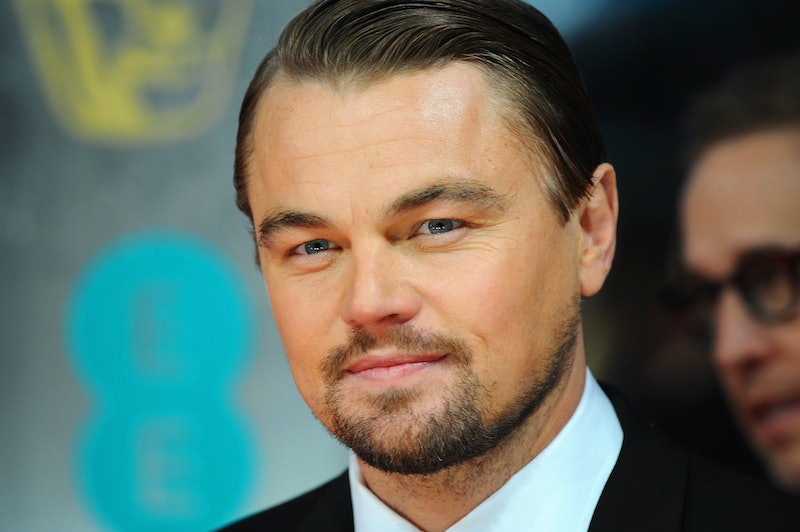 Even though Leonardo DiCaprio is nominated for an Oscar for Best Actor in The Wolf of Wall Street, his eyes are reportedly already set on his next big project that he wants to undertake — and boy, is it a big one. Radar Online reported that Leonardo DiCaprio wants to play President Theodore Roosevelt in an upcoming big screen biopic, and if anyone can do it, it's Leo. He's proved his immense depth and range as an actor over the past 30 years, and all that's missing from his resume is playing a president (hi, Daniel Day-Lewis) and an Oscar (hi again, Daniel Day-Lewis).

"Leo is telling friends that after his latest movie proved to be a massive box-office hit, he’s pushing forward with his biopic of Roosevelt, which will re-team him with director Martin Scorsese,” Radar's source reports.

The Roosevelt biopic may be based on Edmund Morris' biography, The Rise of Theodore Roosevelt, which won a Pulitzer prize and detailed the beloved 26th president's life. Proposals and initial talks about the film happened in 2007, after Scorsese won his first Oscar for The Departed. Proper funding never happened for the film at the time. Now, the actor reportedly hopes that his Oscar-nominated role could reignite interest and funding for the biopic.

"[DiCaprio] says it's 'now or never' as he's patiently waited almost a decade for the money to materialize," the outlet's source said. "He'll do whatever it takes."

Scorsese and DiCaprio's mutual adoration of one another came after they teamed up in 2002 for Gangs of New York, and have worked on five films together since then.

If DiCaprio doesn't nab the Best Actor award this time around, something tells me that playing the great Theodore Roosevelt could give him another frontrunner spot at the Academy Awards next year. Roosevelt was adored by many for his larger-than-life personality and exploratory character that Leo would naturally nail.

So, in the spirit of a famous Roosevelt quote, speak like the Rough Rider and then carry a big Oscar. Hopefully.

More like this
How Andrea Riseborough Got Nominated — & Almost Disqualified For An Oscar
By Jake Viswanath
Twitter Is Overjoyed By Angela Bassett’s Record-Making Oscar Nomination
By Maxine Harrison
12 Years Ago, Austin Butler Manifested His Oscar Nom In This Disney Movie Scene
By Jake Viswanath
Alicia Silverstone Revives Her 'Clueless' Character In This Super Bowl Commercial
By Jake Viswanath
Get Even More From Bustle — Sign Up For The Newsletter
From hair trends to relationship advice, our daily newsletter has everything you need to sound like a person who’s on TikTok, even if you aren’t.