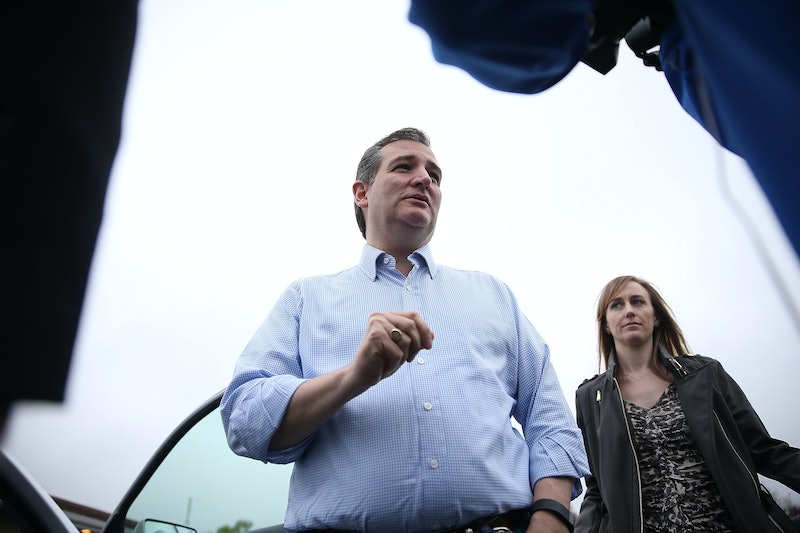 On Tuesday night, following the Indiana primaries, Ted Cruz suspended his campaign for the presidency. His withdrawal from the race left many wondering: Will Ted Cruz be Donald Trump's vice president? There were a couple of moments in Cruz's speech that made such a move seem possible, but it would be difficult for the two adversaries to overcome the contentious relationship that has marked the campaign trail.

Before officially stating his exit from the race, Cruz made many comments about the values that have informed his bid for the presidency — "We are suspending our campaign — but hear me now, I am not suspending our fight for liberty." He went on to say he'd continue this fight "next week, and next month, and next year" for Republican values — could he have been hinting that he would do so as part of his rival's presidential ticket?

It seems unlikely, given that other parts of Cruz's speech seemed to be directly targeted at the bellicose billionaire. "American is hopeful, optimistic. America is kind. We are not boastful, or mean spirited," he said. He also referenced the last contested Republican National Convention, in 1976, saying that Ronald Reagan then "spoke not of the next four years" but the next 100. "He saw not the close horizons that are of interest to those who seek to build their own fortunes in the short term," but the long-term hopes and dreams of the party, Cruz said. One could certainly accuse Trump of being both mean spirited and short sighted.

Beyond that, Trump and Cruz have had a very antagonistic relationship throughout the campaign — as Trump has had with most other candidates in the running. He took to calling Cruz "Lyin' Ted" for a good chunk of the primary season, and even went to far as to insult Cruz's wife, Heidi.

And even if the two could decide to play nice and pool their resources in hopes that it would ensure a Republican victory in the fall, it probably wouldn't be in Trump's best interest. As a Washington outsider who has alienated most of the Republican establishment, Trump may be wise to choose someone on the inside.

But after Lindsey Graham said, "If you killed Ted Cruz on the floor of the Senate, and the trial was in the Senate, nobody would convict you," it's pretty clear that well-liked insider is not Mr. Cruz.