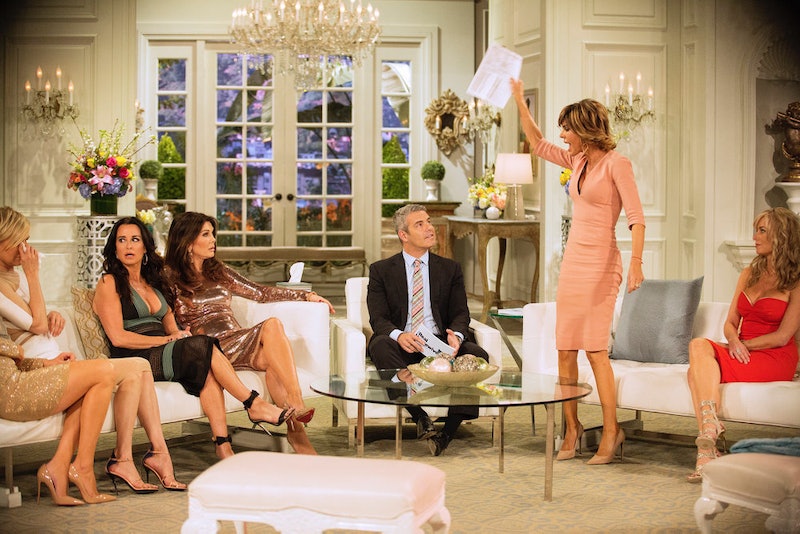 Change the record, Lisa Rinna. Once again, The Real Housewives Of Beverly Hills reunion turned into the interrogation of Lisa Vanderpump. Is anyone else pulling their hair out and screaming? I swear, I have nightmares about Lisa Rinna and Eileen chasing me while screaming, "manipulation!" It's serious. On Tuesday, the conversation went right on back to the whole Munchausen debacle and it literally went around and around like a merry-go-round from hell. Didn't we already go over this? The answer is yes, we did go over this already.

When Rinna tried to explain whether she thought of herself as easily manipulated, her good friend Eileen was luckily there to put words in her mouth and say, with a pat on Rinna's knee, "I think you were afraid of Lisa Vanderpump." Good thing Eileen is there to be Rinna's mouthpiece.

One thing that drives me nuts is Eileen and Rinna's penchant for whispering their nasty words to eachother instead of saying them out loud. Luckily, through the magic of television, their microphones pick up each word. They did plenty of this whispering during their "manipulation" tirade against LVP, and it was frustrating to watch as a viewer. For people who wave the, "own your sh*t" flag constantly, they certainly don't own theirs.

I have to say, the Eileen and Rinna show is not fun to watch. They are so redundant and they start so many fires. The way they condescendingly speak to people has got to go. Next season, let's see two new Real Housewives, Andy.