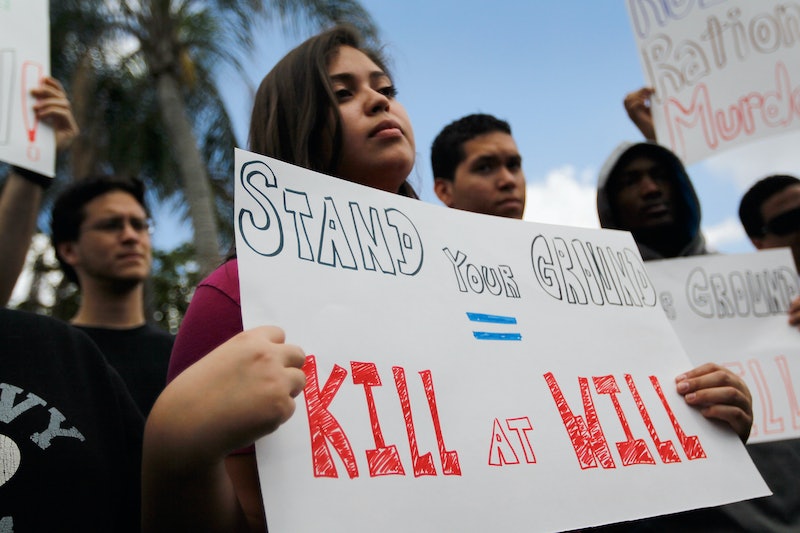 Stand your ground laws have once again taken a front seat with the "loud music" trial of Michael Dunn, the Florida man convicted of second-degree murder of teenager Jordan Davis. A mistrial prevented Dunn from facing first-degree murder charges for shooting at Davis and his friends while they sat in an SUV playing loud music in a Jacksonville, Fla., convenience store parking lot in November 2012. He now faces up to 60 years in prison, which is practically a life sentence for Dunn.

The white, 47-year-old software engineer who ended up killing the black, unarmed 17-year-old teenager called himself a "victim" in interrogation tapes, even comparing himself to a rape victim in a call to his wife released this week.

I was the one that was being preyed upon and I fought back. It’s not quite the same but it made me think of like the old TV shows and movies where like how the police used to think when a chick got raped going, “Oh, it’s her fault because of the way she dressed.” I’m like, “So it’s my fault (laughing) because I asked them to turn their music down. I got attacked and I fought back because I didn’t want to be a victim and now I’m in trouble. I refused to be a victim and now I’m incarcerated.”

Even though Dunn's case did not solely depend on the stand your ground laws, they could further back up his claims of acting on self-defense. Dunn had to reasonably believe that Davis or one of the teens in the car had a gun. Even though it was never found, Dunn maintains that the teens had ample time to hide a weapon.

But his case was more impacted by the fact that he kept shooting at the car after it pulled away (thus reacting out of anger, not fear) and that he never told his girlfriend about the teens having a shotgun in the two days after the incident.

"His honor will further tell you that if Michael Dunn was in a public place where he had a legal right to be, he had no duty to retreat and had the right to stand his ground and meet force with force, including deadly force."

Stand your ground laws exist in about 20 states, and they are largely supported by Republicans.

Stand-your-ground laws, pioneered in Florida in 2005, extend the so-called castle doctrine – a notion of English common law – from the home to public places. The basic idea is that citizens have no “duty to retreat” from an aggressor before using deadly force to stop an attack if they have reasonable suspicion that they’ll be hurt or killed.

Because Dunn is a white middle-aged man who maintains he defended himself against a black teenager, the Dunn trial evokes similarities to the George Zimmerman/Trayvon Martin case, which set off a firestorm of racial debates across the country. Zimmerman, a half-Hispanic neighborhood watch officer, claims he shot Martin, then 17, in self-defense, while the teen was walking through his community. Zimmerman was found not guilty of murder and manslaughter.

It's significant to note, however, that neither Dunn nor Zimmerman used the stand your ground law in their defense, but that the judges referred to it during both recent cases.

Leaders like Al Sharpton are now urging the government to repeal stand your ground laws. A Texas A&M study found that "justifiable homicide findings" increased by eight percent in states with the laws. However, backers of the laws say that they benefit black defendants, with defense attorneys citing more successes when invoking stand-your-ground.

That didn't stop people from taking to Twitter to report their #DangerousBlackKids when the Dunn trial decision was made.

After the public learned about stand your ground laws through the Trayvon Martin case, Marissa Alexander's case was called into question. In 2010, after Alexander gave birth to a baby girl in Florida, her husband at the time questioned whether the child was his — and accused her of infidelity.

After she locked herself in her bathroom, her husband broke through the door and started choking her. She ran to their garage but couldn't escape the house, so she grabbed a gun from their car. When her husband threatened to kill her, Alexander says she fired a warning shot at the wall. According to The Florida Times-Union:

Alexander is charged with three counts of aggravated assault with a deadly weapon. Her case drew national attention after she was denied immunity under the state’s Stand Your Ground law and sentenced to a mandatory 20 years in prison under the 10-20-Life statutes for discharging a firearm during certain felonies.

Her conviction was overturned in September 2013, and she awaits a retrial in March. Her bond was threatened to be revoked because she allegedly ran un-approved errands, but a judge decided against it.

It's been dubbed the "reverse Trayvon Martin case," with a black man shooting a Latino man — under the stand your ground law. In April 2012, Daniel Adkins was walking his dog through a Taco Bell parking lot in Phoenix as Cordell Jude and his girlfriend were at the drive-thru. When Jude slammed on his brakes to avoid hitting Adkins, Jude thought he saw Adkins swing a metal pipe or bat. He reacted quickly, saying he wanted to protect his girlfriend and their unborn baby, pulling a gun from his sweatpants and fatally shooting Adkins. Jude was found guilty of reckless manslaughter in November 2013.

What was Adkins really holding? A green dog leash.

Another "loud music" stand your ground case actually occurred in 2010. After Raul Rodriguez called police to report a party going on near his house in Texas, he decided to take matters into his own hands when his neighbors didn't comply. The incident ended with Rodriguez shooting elementary school teacher Kelly Danaher and being sentenced to 40 years in prison.

In video he recorded himself, Rodriguez stays on the phone with a 911 dispatcher and says that he fears for his life after a truck with a group of men pulls up to him. He threatens to shoot the men after they approach him, saying "I'm standing my ground here." The video ends with a gunshot.

In 2012, a grand jury cleared 21-year-old Byron Thomas in the shooting death of 15-year-old Jamonta Miles after it was deemed Thomas acted in self-defense. The incident was reportedly linked to gang violence. After arguing over an alleged marijuana sale, Thomas shot an an SUV packed with teens as it sped away. Lafourche Parish Sheriff Craig Webre said that Thomas "decided to stand his ground" because one of the people in the car could have jumped out and fired at him.

Stand your ground laws were adopted in Louisiana in 2006.