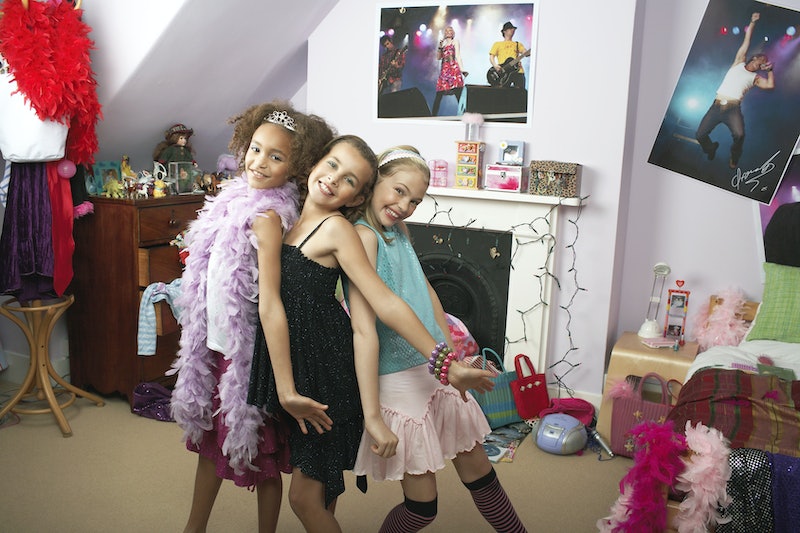 What do kids' sleepovers look like these days? I imagine it's a lot of Snapchat and Justin Bieber, but things looked slightly different in my youth: We played Mall Madness and Dream Phone, and debated who would and would not give us cooties. And then of course, there were those awkward things you experienced at sleepovers in the '90s, like being the only one without a cool themed sleeping bag and matching pillow case. Wasn't that just, like, the worst?

'90s sleepovers made for memories we'll never forget: the best movie rentals (10 Things I Hate About You if you wanted to drool over Heath Ledger, The Blair Witch Project if you were feeling gutsy), the tastiest snacks (Nerds and Gushers counted as dinner, thank you very much), and all-night, nonstop gossip about how one of you caught a boy sneaking into the girls' locker room at school. Scandalous.

I recently came across an old photo from one of my many childhood sleepovers. We were playing dress-up. I was wearing a feather boa, red high heels, and a dress over my bluejeans. Harmless, carefree fun for a kid of that age. But those aren't the only memories I have — oh no. There were still plenty of '90s sleepover experiences that made us all want to crawl into a hole and disappear.

1. Not Being Allowed To Sleep Over At All

There was always that one girl... that one poor girl whose mom wouldn't let her stay the night.

2. A Game Of Light As A Feather, Stiff As A Board — Gone Awry

You'd all gasp because it actually worked, and you'd lift your friend off the floor with nothing but your fingertips. Except for me. All 5'9" of me. They'd get me a few inches off the ground and then drop me. Life is not like The Craft.

3. Being The First Person To Fall Asleep

That person was definitely waking up with a permanent marker mustache.

4. Finding Out The Next Morning That You Snored Like A Bloodhound

All the other girls were so dainty and fragile whilst they slept. You sounded like your Uncle Henry.

5. Not Knowing The Lyrics To The Most Popular Songs

This was an inevitable sleepover happening. Someone would pop in a CD or turn on MTV, back when MTV still played music videos. Or worse... someone would suggest you shoot your own music video. They'd put on "No Scrubs," which happened to be the one song you didn't know the lyrics to. You'd mouth them out without making any actual noise and pray no one noticed.

6. Failing Epically At Truth Or Dare

You were a terrible liar and a total wimp. So when your options were to either admit that you had a crush on your math teacher or jump in the pool naked, you faked sick and called your mom.

7. Getting Busted During A Prank Call

You tried to top your friend, who could seamlessly pull off a German accent. But for some crazy reason, your neighbor didn't believe you when you told him you were the king of Canada calling about his broken refrigerator.

8. Chickening Out Of Going Into The 18+ Section At The Video Store

You were supposed to be there to rent Space Jam.

This meant you were pretty much doomed for all eternity.

"I'm not crying, you guys. I just have something in my eye."