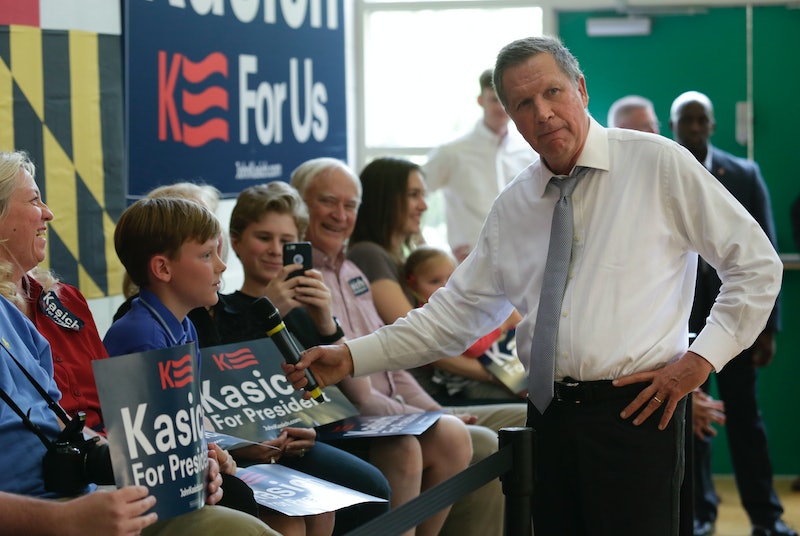 After losing to Donald Trump in Indiana on Tuesday evening, Ted Cruz dropped out of the race and John Kasich made a Star Wars reference. Needless to say, the last GOP candidate standing between Trump and a nomination took advantage of the fact that May 4 marks official Star Wars Day and showed that he too is a fan. He went as far, in fact, as to incorporate the series' aesthetic into his own struggling campaign. The nation expected the Ohio governor to drop out after only having won the majority vote in his home state's primary. However, it looks as though he's having some fun before conceding to his anti-establishment enemy. Or, it's a last ditch effort. After all, who doesn't love Star Wars?

Kasich's campaign created a brand new video that begins as every Star Wars film has. According to Kasich, the universe will be in pretty bad shape if Hillary Clinton beats Trump and takes office. The scrolling letters predict the alleged repercussions: she'll nominate Elizabeth Warren as Supreme Court Justice, Nancy Pelosi will advocate tax increases, the Second Amendment will be stripped, and the world will lose respect for us.

But according to Kasich, there's a light at the end of the dark galactic tunnel... and it's him. As the famous Star Wars theme song transitions into motivational orchestral music, the video showcases a newscast that describes him as "the only GOP presidential contender that could get more electoral college votes than Hillary Clinton and beat her in the general election."

In all fairness, Kasich isn't wrong. According to RealClearPolitics' aggregator, a multitude of surveys show that the Ohio governor has a better chance of defeating Clinton in a general election than Trump has. According to the estimates, Clinton would beat Trump by 6.5 points, whereas Kasich is projected to beat Clinton by 7.4 point if elected. Much of the candidate's appeal among delegates and voters has to do with his moderate stance. In this election, that's apparently become a rare position for GOP candidates to take.

Though Kasich could potentially do well in a general election, he shouldn't get ahead of himself just yet. Currently, Trump only needs to win about 190 more delegates to secure the nomination and thwart any hope for a contested convention. If, however, Trump fails to gain 1,237 delegates — which is highly unlikely — Kasich could win Cruz's delegates in a contested convention. But, he shouldn't necessarily count on it.

Only one question remains: according to Kasich, is Clinton or Trump more representative of the Dark Side? If one thing's for certain, it's that the past 24 hours have been packed with surprises.

More like this
How To Use The Whatnot App To Thrift Vintage Items
By Emma Carey
The 4 Best Brushes For Wavy Hair, According To Reviewers
By Deanna McCormack
Logan Addressed His 'Bachelorette' Exit & Mental Health Struggles On Instagram
By Marina Watts
An Honest Review Of The F1 Pro Massage Gun
By Carolyn Steber
Get Even More From Bustle — Sign Up For The Newsletter