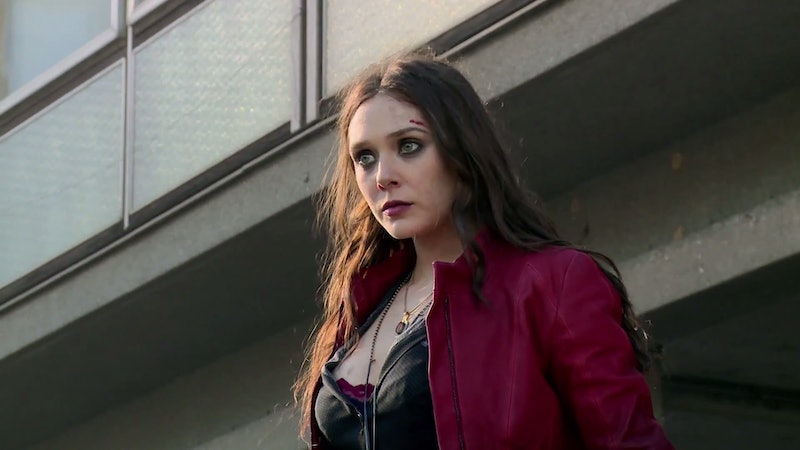 Let's get one thing out of the way: superhero movies, by and large, tend not to the best when it comes to portraying women. Although there are a few exceptions (namely, the X-Men series), the vast majority of Marvel and DC movies are based around men, with the female heroes being shoved to the sidelines or, in far too many cases, barely present at all. On the surface, Captain America: Civil War might seem no different than the rest of the movies in its genre, as it's a film about two male heroes, their male allies, and a handful of male evil villains. Yet in reality, Civil War is actually a pretty feminist movie, the rare superhero film that puts complicated, three-dimensional women front and center.

With Black Widow, Scarlet Witch, and Sharon Carter all playing central roles in the film, Civil War features far more female superheroes than you'd typically find in a Marvel or DC-made movie. These women are portrayed as interesting, complex, realistically flawed characters who — most importantly — all have integral parts in the story. They're not just there as background figures or love interests; each of these women has a real effect on the movie, and Civil War would be vastly different without their involvement. That's a huge change from the typical depiction of superhero women, and it makes Civil War stand out from the pack in a truly awesome way.

Let's start with Scarlet Witch. The hero also known as Wanda Maximoff plays one of the biggest parts in the movie — she causes the war between Tony and Steve, albeit inadvertently. At the beginning of the movie, the tremendously powerful Scarlet Witch accidentally destroys a building, causing numerous civilian casualties and international outrage. She's heartbroken by what she's done, but the incident causes world leaders to reevaluate the Avengers' purpose, and draft up a document called the Sokovia Accords that proposes government oversight of the group and a limitation of their powers. Although some of the Avengers — the ones who become Team Iron Man — are OK with signing off on the Accords, agreeing that they need to be put in check, others — Team Captain America — are not willing to give up their freedom.

Without Scarlet Witch, there would simply be no Civil War, and it's refreshing to see a female superhero play such a major role in the movie, with such an undeniably huge impact on the plot. Yet she's not the only woman in Civil War who matters. Black Widow, too, has a significant role, as an Avenger whose allegiance is torn between Tony and Steve. She's a member of Team Iron Man, but during the climatic fight between the two sides, she gives the other group a boost by letting Cap and Bucky escape. Her decision greatly affects the conclusion of the movie, in which Bucky and Steve go on the run, with Iron Man hot on their tail. She's not your average female superhero, who only says a few lines and has no real impact on the story. Like Scarlet Witch, Black Widow plays a majorly important role in Civil War.

And then there's Sharon Carter. Although Sharon certainly has a smaller role than Black Widow or Scarlet Witch, she's not some forgettable side character, either. A strong, highly intelligent, incredibly capable person, Sharon is integral in Team Cap's success, guiding Steve and his allies during some of their biggest challenges and providing intel on the locations they enter. She's a love interest for Steve, yes, but it'd be a disservice to her character to simply dismiss her as that; she serves a bigger purpose than just the girl he flirts with, and she has a significant supporting role in the story.

This all isn't to deny that Civil War is a male-dominated movie, because it is. Despite these great female characters being on the roster, the vast majority of the film's cast members are men. Yet the inclusion of the three women above makes a huge difference, and it's inspiring to see. Hopefully more superhero films will follow suit, featuring female characters who are just as essential to the story as male ones — and perhaps eventually, even more essential, once Captain Marvel and that much-needed Black Widow movie finally come along.