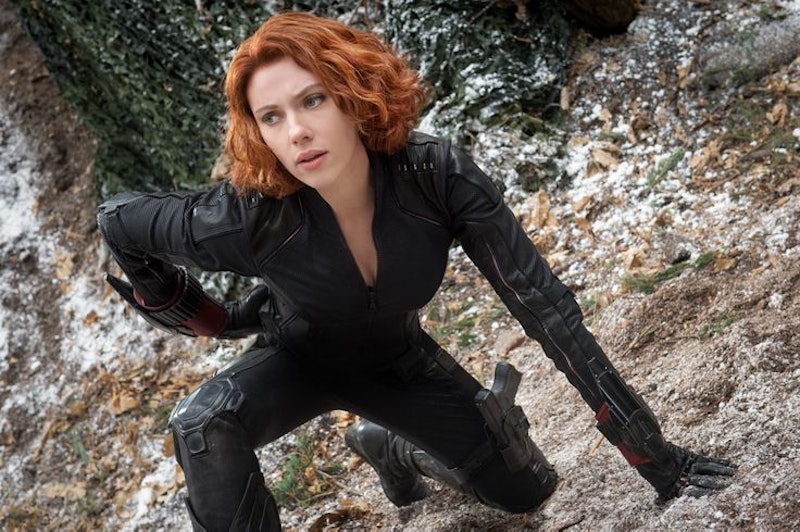 For a long time, the world of superheroes was dominated by male heroes. When it came to the woman's role in films of the superhero genre, oftentimes the female roles were merely the damsels in distress — despite the world of comic books holding a variety of female characters not yet recognized by film and television. But, now, that's all changing. After outrage over the lack of Black Widow merchandise following the release of The Avengers: Age Of Ultron, Marvel has declared that Captain America: Civil War is going to have a much different experience when it comes to how they release toys for fans of the film. Civil War merchandise will include Black Widow. Yes, that means clothing, action figures, and more all representative of Scarlett Johansson's character.

In the span of things female superhero, this development is just one major step in the right direction among all of the other amazing things that have been happening over the past couple of years. However, it has become clear that things are just getting started. And it's about time. Here are all of the ways in which now is the greatest time for girls and women in the world of superhero media, and here's already hoping that thins continue to imrpove moving forward.

While, sadly, a Black Widow solo film has not yet been confirmed, fans of Natasha Romanoff's totally badass work now have some recognition to look forward to. Since Marvel has announced that the release of Captain America: Civil War will come with a slew of long-awaited merchandise of the black-suited female icon of The Avengers, please excuse me while I go buy it all.

2. The Scarlet Witch Has Been Added To The Avengers

While this addition may not seem like much, it's actually a huge deal. For one, the audience was introduced to another woman with straight-up power in The Avengers: Age Of Ultron. However, it's the way that she was added to the crew that tells us so much more. She was a twin who was usually dependent on her brother, but, as the story continues, the Scarlet Witch was forced to learn how to do one thing: Stand on her own two feet without her brother holding her hand.

3. A Captain Marvel Film Is Actually On Its Way

March 8, 2019 is going to be one historical day for Marvel when they unveil their first ever fully female-led superhero film. And, while fans do wish it could be coming a little bit sooner, it is still a success nonetheless.

4. Wonder Woman Is Hitting The Big Screen For The First Time In March

The female superhero that has to be the most commonly known is DC Comics' Amazonian woman herself. However, after a slew of Batman movies and a Superman film, Diana is finally appearing in the latest mythos in the March 2016 release of Batman V Superman: Dawn Of Justice and later taking over 2017 with her own self-titled Wonder Woman film. It's a moment that we have been waiting for for far too long.

5. Jessica Jones Is Everything Feminists Want In A Female Hero

By covering topics like consent and relationship abuse, Jessica Jones proves that women can face anything and move forward even in the worst of times. Not only is Krysten Ritter's performance powerful, but she makes you feel like you can do anything.

Not only is Marvel bringing Elektra on board for the hit Netflix show's second season, but she's going to be Daredevil's much-needed savior in a Hell's Kitchen filled with new villains and crime-infested streets. And the best part is that she is going to be looking awesome and totally in control of herself the entire time. And I thought just having Jessica Jones in Hell's Kitchen was good enough.

DC Comics' decision to give Supergirl her own show was obviously a forward progression for the spotlights in which female superheroes get to be represented. However, the show also stands for so much more. Kara Danvers isn't just your average busty, sexualized heroine. She's the quirky, awkward, girl-next-door that could literally be you. Superheroes have never been so real.

8. The Powerpuff Girls Are Coming Back

The Powerpuff Girls were the superheroine saviors of '90s cartoons... and now they're coming back. As further proof that times are changing for women in super-suits, Blossom, Bubbles, and Buttercup are ready to fight crime once again. An entire new generation of young girls will have them to look up to, and the show is one of those throwbacks that only pushes us forward.

Basically, everything good about S.H.I.E.L.D as comic book fans know it would be nothing if it wasn't for the efforts of Peggy Carter. This show proves time and time again that this spy can handle herself. With two seasons down, this show is on the table to be renewed for a Season 3. How awesome is that?

Back when the Marvel spin-off show premiered in 2013 one thing soon became clear. Agents of S.H.I.E.L.D. was totally leveling the playing field when it came to gender representation. And now, as the show enters its fourth season, the number strong female characters has only grown. This show is just breaking all superhero show expectations.

11. Star Wars' Rey Is Allowing Girls To Dream Of Being A Jedi

I know that Star Wars is not technically considered a superhero movie, but using mind control powers sure says superhero to me. With Rey heading into her Jedi training and the end of Star Wars: The Force Awakens, there's one thing that is now being made clear. In the Star Wars universe, for the first time, a woman can be the main character of the galaxy's biggest box office sensation. #Goals.

It's a good time to be a superhero-loving woman. While all this progress may all be a long time coming, the good news is that this means there is only a bright future ahead. It's about time that the world recognizes woman for the real heroes they are.

More like this
The 'Hocus Pocus' Sequel Finally Has A Release Date & It Makes Total Sense
By Shannon Barbour and Radhika Menon
Sandra Bullock, Girlboss Extraordinaire
By Matt Harkins & Viviana Olen
Elizabeth Olsen Is Better Off Without Us
By Chloe Foussianes
What Does Doctor Strange’s Third Eye Mean?
By Arya Roshanian
Get Even More From Bustle — Sign Up For The Newsletter