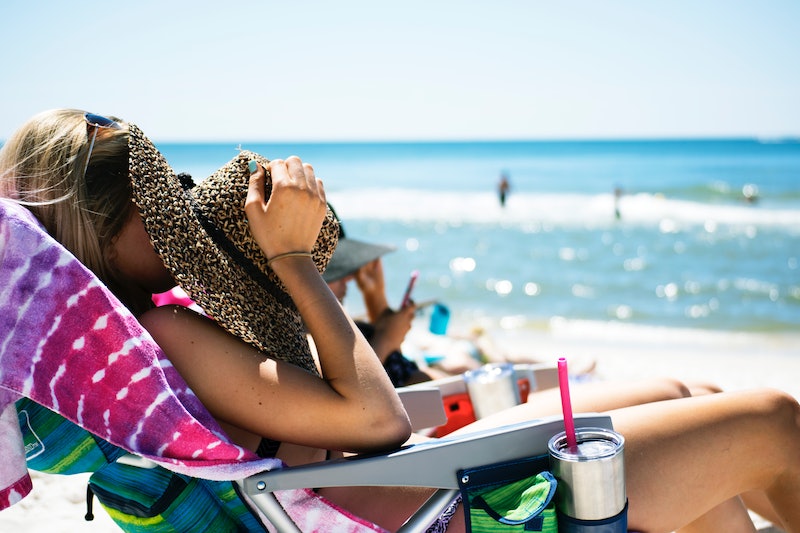 Prepping for prom in 2016 takes a lot of effort; you gotta get the dress, the hair and nails, the perfect corsage, and of course a spray tan won’t hurt — or so one Ohio teen thought. Emotions run high before the big event, and a girl who cried after her spray tan learned a valuable lesson in what not to do when you go to get that healthy sun-kissed glow. Seventeen-year-old Skyler Davis felt she was too pale prior to her senior prom (which I suppose would make me a literal ghost?). Davis decided that though had never gotten a spray tan before — big red flag — that that would be the easiest way to be bronze in time for those important prom photos. So she went ahead and booked an appointment at the Bella Via Day Spa in Toledo. (Which, y'know, props — inexperience or not, it's still the healthiest way to get a tan!)

“Although I have never gotten a spray tan before, I knew it wouldn’t hurt to get one for prom,” she told BuzzFeed News, with all the innocence of one still shielded from life’s cruel twists of fate. Trying new things before a big event rarely goes down smoothly (just say no to that perm), but she was actually pleased with the results. Spray tan technician Carrie Lavigne confirmed that everything was just fine when the teen left the spa.

But in accordance with Murphy’s Law, the flawless results turned disastrous. A brief ten minutes later Skyler and her boyfriend, Chris Lepre, got into a tiff which left her in tears. “As soon as my tears started coming, I saw I had no tissues in my car and knew I was doomed,” she told BuzzFeed. “All of a sudden there were white streaks on my once-tan face. Looking in the mirror, I only began to cry more, and there was absolutely nothing I could do but let the tears roll down my face and completely ruin my spray tan.” That day she learned a cardinal rule: there's no crying in spray tan.

Skyler took a photo of the streaky results, and her friends convinced her to post the picture on Twitter. The photo has since been retweeted thousands of times and featured on Imgur and Reddit under the caption "spray tan tears won't go away." Skyler had no idea that her picture would make her internet famous in a matter of days: “I was just a girl with a messed up spray tan, I had no idea this would ever go viral.” However, she soon deleted the tweet because she "had enough of fame."

Luckily, the tear-stained skin was easily fixed before prom with a shower and good exfoliation, and the Davis and her boyfriend soon made up as well. In their prom picture they are positively glowing, but it's certainly not from an application of “Caribbean Cocktail” or “Brazilian blend”.

When asked about his feelings on the situation, Lepre told BuzzFeed, "It’s kind of a weird feeling being the source of spray-tan girl’s tears, but I still find the whole situation quite funny." I suppose that's all the sensitivity you can expect from, well, a high school boyfriend.