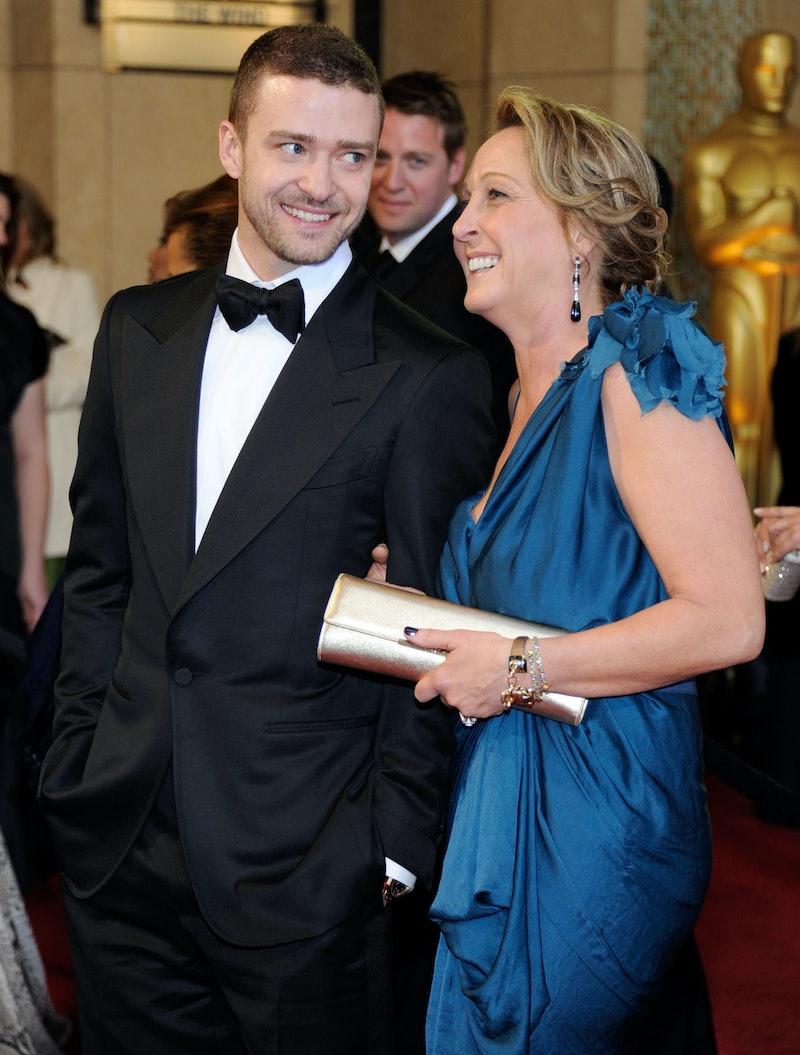 Something that many of my friends and family know about me is that I am very close to my mother. I was born into a Latino family that especially values the connection we have to our matriarchs, which for me meant both my grandmother and mom. Sure, we had our tough moments throughout the years, but it's true that once you're old enough finally start really understanding how special moms are. I know how I feel about mine, so to celebrate Mother's Day, I thought it'd be fun to check out how other people feel about theirs. I rounded up some of the sweetest celebrity quotes about their own mothers to get an insight into their foundations and the women who helped shape them into who they are today.

There are many stories out there about celebrities coming from hard backgrounds and struggling with their family lives, but there are also plenty of celebs who are fortunate enough to have strong ties with their families and mothers. The intricate relationships with family are not always easy or cut and dry, but it is common ground that binds us all together, celebrity or not.

I admire my own mother and count her as a best friend, and here are 17 celebrities who also have nothing but kind and amazing words to say about their mommas. Let's celebrate them!

Hiddles is perfect to me for many reasons, but his closeness to his mom and sisters is something I always thought was adorable. He is a noted feminist and counts his mother as his inspiration telling Elle UK ,

I believe in the strength and intelligence and sensitivity of women. My mother, my sisters, [they] are strong. My mum is a strong woman and I love her for it.

Garner once teared up talking about her mom and sister on the Today s how, so it's safe to say they're all very close. She spoke to Southern Living in 2015 about their humble background and what she learned from her mother, Patricia:

It’s really important for my kids to see that everyone doesn’t have the lives they see in Los Angeles... That doesn’t reflect the rest of the world. I want them to grow up with the Southern values I had — to look at people when they say hello and to stop and smell the roses. If I could do half as good a job as my mom did, I’d be pretty happy.

Theron spoke to ABC News about the tragedy she faced in her early life when her mother had to shoot her father in self defense. Theron said of her mother urging her to move away from this event:

For her to say go, go make something of your life, go, go do something — that was an extremely brave thing for her to do... Those are the sacrifices, you know, that I think you do for your children, and she always did that. She always put me first.

One might not expect Russell Brand to be a softie about anything, but he only had sweet things to say about his mother when speaking to Redbook in 2011. He said of the lessons his mom has taught him:

To listen to people and to treat them well. That's something she does with every person she meets. My mum's had cancer three times, and she's always remained charmingly free of cynicism, very open to life, and wonderfully gentle while at the same time strong. Strength does not have to be belligerent and loud.

Jolie lost her mother, Marcheline Bertrand, in 2007 after her battle with ovarian cancer, and Jolie has spoken often about their close relationship. The actor spoke to Anderson Cooper in 2011 and said,

She was an extraordinary mother. She was so selfless... she was one of those very, very kind people that loved to do everything for others. I could never be as good of a mother or person... She made me feel like I had a voice and that no matter what would happen, I knew she'd love me.

Ughhh, hearing Justin Timberlake talk about his mom makes me even more envious of Jessica Biel. He had these adorable things to say about his mom, Lynn Harless, to The Daily Mail :

We're best friends — she's a very special woman. She's been so supportive. She's partly the reason why I have so much respect for women. I'm never going to find someone as good as my mother, am I?

DiCaprio's mom, Irmelin, is often seen as her son's date at film premieres and award shows and they are very close. He told Access Hollywood after his Golden Globe win for The Wolf of Wall Street,

I wouldn’t be doing any of this if it weren’t for her, both my parents. She supported this little kid who said, "I want to be an actor," at 12 years old, which is ridiculous, and she drove me to all these auditions... She’s the only reason I’m able to do what I do.

Miss Tina Knowles, Beyoncé's mother, is a celebrity in her own right. She was known as the designer of many of Destiny's Child's outfits, and she and Beyonceé launched House of Deréon together. Bey is clearly very close to her mom, as Tina is never very far behind during some of her daughter's biggest moments. Bey told Oprah about her relationship with her mom,

[My mom] is one of those people that you feel honored to meet. And no matter who you are, you fall in love with her because she is spiritual, she's inspiring, she's strong, she's funny, she's creative, she's talented... she's everything that I want to be.

Drake is super adorable with his mom, Sandi Graham, on his Instagram, and he is not afraid to share his momma's boy status. He told Huffington Post after the release of his album Nothing Was The Same,

My mother is an incredible woman. I talk about her a lot on this album. She's brought me to this point single-handedly... She's the most important person in my life.

Hayek had an adorably sweet story to share about her mother on Oprah's official website. She said,

I love my mom because she loves to sing, and she has the most beautiful voice I've ever heard. She sings like an angel... She was singing all the time, and many times it embarrassed me. But my mother taught me that whenever she felt like singing, it didn't matter what anyone else thought, including me. She was just going to sing and feel free with her voice. I love her for being brave and for having such an important voice in my life.

Kanye West has spoken out about his admiration for his mother, Donda West, in the past, and he credits her for being the brazen, confident, and sometimes misunderstood visionary he is today. In 2009, West penned a book, Thank You And You’re Welcome, and dedicated it to his mother, who was an English professor. He told Reuters,

My mom taught me to believe in my flyness and conquer my shyness. She raised me to be the voice to allow people to think for themselves, to find their own way.

Efron says he learned how to treat the women in his life right from his mom, Starla. He told People at a 2012 screening of his film The Lucky One,

She's always giving me tips like that... My mom is the No. 1 person who has taught me to be courteous towards women, to always be respectful and polite to them, and to always lead with your heart.

Louis opened up about his mother in the April 2013 issue of Rolling Stone , and he didn't hold back on speaking lovingly about his mom. He said,

My mom was a role model to me; she still is. She’s still ahead of me… She was always cheerful. She never laid down rules. She would win by being smarter and making sense and telling us to make the right choices, but more so it was that she was an example. The emphasis she put on working and taking care of your family is something I followed, but also the fact that she enabled me to take care of myself.

In 2011, Swift recalled to Taste of Country the process of her writing her song "The Best Day," which she wrote as a surprise for her mother. The song was about the times her mom was her best friend when she didn't have anyone to turn to. She said,

She would just take me on these adventures and we would drive around and go to towns we’d never seen before... Those adventures and those days of just running away from my problems — you’re not supposed to run away from your problems, but when you’re 13 and your friends won’t talk to you and they move when you sit down at the lunch table, and your mom lets you run from those problems, I think it’s a good thing... My mom was my escape in a lot of ways.

Hudson sat down with her mom, Goldie Hawn, to talk about an Almay ad they made together. When asked if she's tired of questions regarding their physical resemblance by the Associated Press, Hudson replied,

I really look at that as a real blessing because the relationship between mother and daughter is very complex and to be able to talk about the importance of the relationship is something that I look forward to. It really informed such a huge part of who I am and the confidence that I have as a woman. It really does come from the closeness that I have with mommy. Now as I get questions about mom it's so much deeper and so much more complex that I look forward to sharing that more and more with people.

Like his friend Leo, Bradley Cooper often brings his mother as his date for red carpet events. In an interview with Detail s in 2013, he revealed that he was roommates with his mom following his father's death from cancer, and his comments were so sweet. Cooper shared,

We're surviving. Both of us. Let's face it: It's probably not easy for her, by the way, to be living with her son... It was a schism, and its aftershock has not stopped. And we need each other. So here we are... It's not without complications. It's not like I live in a compound and she's in the guesthouse. No. She's in the next room. But here's the thing: She's a cool chick. We can hang, and she can roll with the punches... I love having her. I wouldn't have it any other way.

Sounds like Gosling is taking a page out of Tom Hiddleston's book when it comes to honoring the relationship he has with the women in his life. He told The Sun,

If I have any particular appeal to women, maybe it’s because I listen more than other guys do and appreciate how they think and feel about things. I grew up in a family of strong women and I owe any capacity I have to understand women to my mother and big sister... They taught me to respect women in a way where I’ve always felt a strong emotional connection to women, which has also helped me in the way I approach my work as an actor.

I think moms should be celebrated every day, because it's always lovely to hear words and stories about the inspiring women in all of our lives.