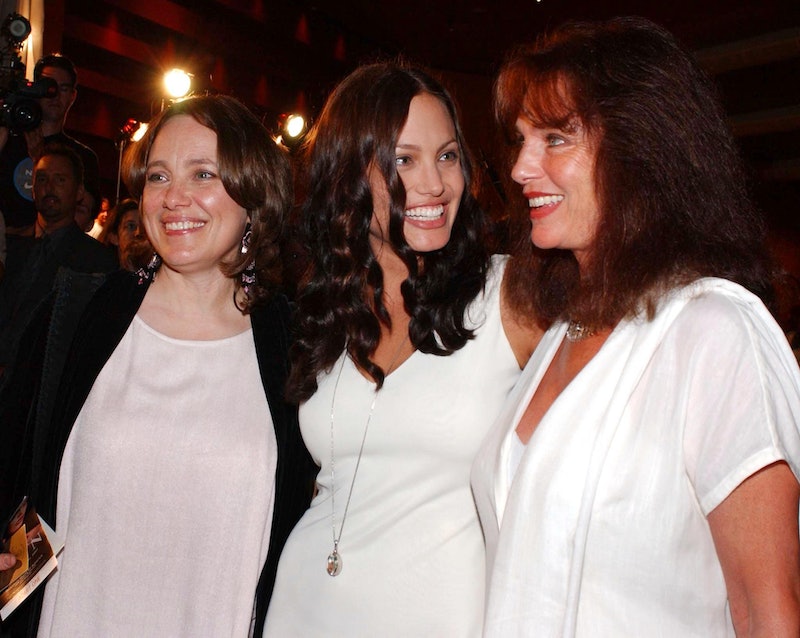 As described in her New York Times' op-ed Tuesday morning, there were many factors that led Angelina Jolie to decide to remove her ovaries and fallopian tubes. There was her elevated risk of getting cancer due to her BRCA1 mutation; the possibility that she was showing early stages of disease; and, of course, the fact that she lost her own mother to ovarian cancer when the woman was just 56 years old.

Anyone familiar with Jolie know just how close she was to her mother, Marcheline Bertrand, and how deeply the woman's death in 2007 affected her. Over the past several years, the actress has spoken up about her mother's lasting impact on her life, whether it was inspiring her humanitarian work, encouraging her acting dreams, or being the reason behind the middle name of one of Jolie's six children. Eight years after her passing, it's clear that Bertrand, an actress, producer, and advocate for human rights, continues to influence her daughter in countless ways. Here, 11 quotes by Angelina Jolie that show just how much her mother has affected her life:

"She supported any crazy thing I did, but whenever it had meaning, she made a point of telling me, that's what film is for... she was very clear that nothing would mean anything if I didn't live a life of use to others."

In Jolie's acceptance speech of her 2013 Jean Hersholt Humanitarian Award, she paid tribute to her mother by noting how big an influence Bertrand, a humanitarian herself, had on her work as an advocate.

"We often speak of 'Mommy’s mommy,' and I find myself trying to explain the illness that took her away from us. They have asked if the same could happen to me."

It's heartbreaking to imagine Jolie having to tell her young children that their grandmother was lost to a disease that she herself is more susceptible to, but thankfully, due to her surgeries, the chance of her succumbing to the same cancers is extremely low.

"She drove me to every audition, and she would wait in the car for hours, always make me feel really good... she wasn't really the best critic, since she never really had anything unkind to say, but she did give me love and confidence."

In the same speech, Jolie acknowledged her mother's impact on her career as an actress. Although Bertrand only appeared in a few films, she had a strong love for the arts and encouraged both her children to pursue their dreams.

"I will never be as good a mother as she was... she was just grace incarnate, she was the most generous, loving — she's better than me."

Jolie may be hailed for her adoptions and work on behalf of children, but in her mind, nothing she's done in that regard has lived up to the legacy of her mother.

"Everybody called her marshmellow, as a joke, because she was just the softest, most gentle woman in the world... but when it came to her kids, she was really, really fierce."

It's clear that in this regard, Jolie is just like her mother.

"She was a great listener, and a great friend — she was my best friend — and so I could talk to her about everything."

No I'm not crying, you're crying.

"She made me feel like I had a voice and that no matter what would happen, I knew she'd love me."

Take a minute to call your own mom. I understand.

"I also wore a little flower ring that was hers, and Jamie wore an angel pin from her jewelry box."

The small touches Jolie and her brother made to honor Bertrand at Jolie's wedding to Brad Pitt were moving and intimate, a beautiful tribute to their late mother.

"She was very soft but could move mountains for her kids. That's something I always admire in women: that mix of softness and strength."

As her history has shown, Jolie has inherited that exact combination of her mother's traits.

"I feel in contact with my mother when I look at my children. I can feel her influence over me then."

Losing her mother must have been very difficult, but seeing her in Jolie's own children has to be an enormous comfort for the actress. Bertrand passed away far too soon, but her extraordinary legacy is living on in Jolie's six kids.

"That same day I went to see the surgeon, who had treated my mother. I last saw her the day my mother passed away, and she teared up when she saw me: 'You look just like her.'"

It's not only the kids; Bertrand's influence is evident in Jolie herself, whether it's her work as a humanitarian, her life as a parent, or her efforts to better the lives of women everywhere.