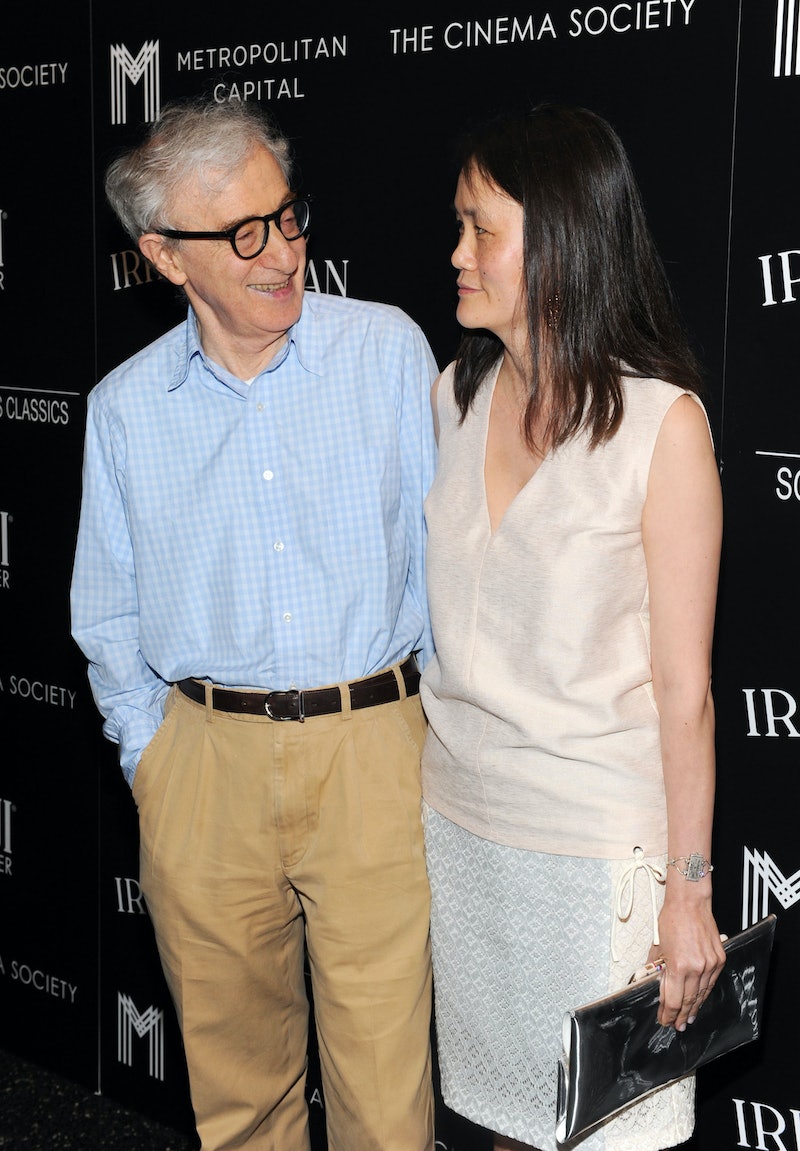 Filmmaker Woody Allen's name may be synonymous with controversy, but he wouldn't know it. According to a new interview with The Hollywood Reporter, he never reads stories about himself — whether related to his work or his personal life. This is especially true when it comes to his marriage. In the interview, Allen talks about his relationship with Soon-Yi Previn and his comments are rather confusing, and frankly, pretty belittling.

When Allen and Previn went public with their relationship in 1992, it sparked plenty of attention, considering she was the adopted daughter of Allen's then-girlfriend Mia Farrow. Plus, she is 35 years his junior. Yet despite it all, they've been together for 25 years now. In his THR interview, Allen was asked about his relationship with Previn and explained,

One of the great experiences of my life has been my wife. She had a very, very difficult upbringing in Korea: She was an orphan on the streets, living out of trash cans and starving as a 6-year-old. And she was picked up and put in an orphanage. And so I've been able to really make her life better. I provided her with enormous opportunities, and she has sparked to them.

Allen added that "she's educated herself and has tons of friends and children and got a college degree and went to graduate school, and she has traveled all over with me now," yet he simultaneously takes credit for these accomplishments and says, "the contributions I've made to her life have given me more pleasure than all my films."

I'm all for couples bringing out the best in one another, but in this case, the 80-year-old makes the dynamic sound rather one-sided. When he's was asked how she has changed his life for the better — multiple times during the interview — he struggled to find an answer. He said, "Changed me? I don't know if you could say she changed me. I don't know if I've changed. I might be the same person I was when I was 20. I'm not sure."

Even when he says she's given him "companionship," his pleasure is at the forefront: "She's given me a lot of pleasure. I adore her, and she's given me a wonderful life. We've been married 20 years. And we were together for a few years before that. And she has given me the great years of my life, personally. She's a great companion and a great wife."

Honestly, I'm not entirely sure how to feel about Allen's words. I wasn't present for the interview, so who knows what tone he used, but to me it sounds like he acts like he's this superhero who swept in and changed his now-wife's life. It would have been better to see him acknowledge that she's helped him in more ways than just boosting his feel-good attitude. He almost makes it sound like he performed some sort of charity work, when really, relationships should be mutually beneficial.

Essentially, if he does love and respect his wife, it'd be nice to see him give her more credit. Those comments don't really seem to do her justice.