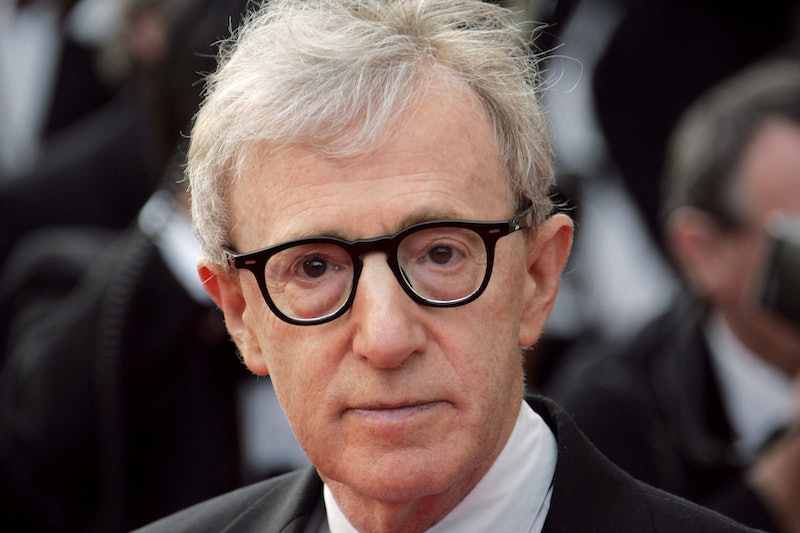 In The Hollywood Reporter story, Dylan Farrow, who accused Allen of molesting her as a child (Allen has repeatedly denied these claims), is a parenthetical side note after a mention that Allen has been able to make a film every year since the 1980s, even throughout the tumultuous '90s when "his split from Mia Farrow threatened to blow up his reputation." In parenthesis, why his reputation was on the line is explained succinctly: "Accusations that Allen abused their then-7-year-old daughter Dylan were not pursued by police after an investigation, but the battle still rages, with a grown-up Dylan reasserting the claims two years ago in The New York Times." And just like that the story continues. But while it's clear Allen's work was not affected by Farrow's allegations, his public image has been.

Allen has always denied the abuse allegations, claiming Mia Farrow had put these ideas in Dylan's head as a way to get back at him for starting a relationship with Soon-Yi, her adopted daughter. In 2014, Farrow wrote an open letter to The New York Times that refuted Allen's claims about her mother and, for the first time, had her detailing the alleged abuse in her own words. It also got people once again talking about the allegations that had long been dormant, with some tweeting the #IBelieveDylanFarrow hashtag in support of Farrow and speaking out against victim blaming.

Since Farrow's letter, Lena Dunham has been very open about her dislike for Allen, calling him a "real perv" and telling Marc Maron on his WTF podcast that she's "nauseated" with Allen. When compared to him at the 2014 The New Yorker Festival, Dunham said, "I like the Louis C.K. [comparison] more because there's no molestation." Farrow's letter also forced Allen to respond to the claims, writing his own statement to the New York Times that had him detailing, in his own words, the investigation that led him to be acquitted of any wrongdoing:

Of course, I did not molest Dylan. I loved her and hope one day she will grasp how she has been cheated out of having a loving father and exploited by a mother more interested in her own festering anger than her daughter’s well-being. Being taught to hate your father and made to believe he molested you has already taken a psychological toll on this lovely young woman, and Soon-Yi and I are both hoping that one day she will understand who has really made her a victim and reconnect with us, as Moses has, in a loving, productive way.

With that, things did seem to go back to business as usual for Allen. He's made three films since then: 2014's Magic In The Moonlight, 2015's Irrational Man, and now Café Society, with the last two receiving the honor of premiering at the Cannes Film Festival. But these allegations continue to be an asterisk on his career. They have changed the context in which we talk about his legacy, even if he doesn't want to think so.

In a July 2015 interview, NPR asked Allen how the abuse allegations affected who sees his films, and he replied that they didn't have any effect.

I always had a small audience. People did not come in great abundance, and they still don't, and I've maintained the same audience over the years. If the reviews are bad, they don't come. If the reviews are good, they probably come. [His private life has] no meaning in the way I make movies, too. I never see any evidence of anything in my private life resonating in film.

But in nearly every story that's been written about Allen since 2014, Dylan Farrow and her allegations are mentioned. And as Slate pointed out, reviews for Magic In The Moonlight , which came out the same year as Farrow's letter, were full of references to the allegations of abuse. Vanity Fair film critic Richard Lawson wrote that, "Obviously Allen has fans who will forgive the film for its proclivities, but given the swirl of news surrounding Allen in the past year, many more may share my distaste for the romance at the center of Magic in the Moonlight."

Buzzfeed's review mentions how it's hard not to connect the screenplay for this film, which pairs a older man (Colin Firth) with a much younger woman (Emma Stone), to Farrow's letter because it's "basically about an older man trying to prove that a younger woman is a liar." The FilmComment review also mentions that despite the fact it was written and shot before Farrow's letter the movie, while watching Magic in The Moonlight "it did occur to me that the film’s suspense derives primarily from the spectacle of an older entertainer trying to prove that a young woman is lying."

With Allen's next film, Irrational Man, which looked at the relationship between an older college professor (Joaquin Phoenix) and his younger student (Stone, again), Farrow once again found her way into the reviews with Complex's headline, "Woody Allen Should Retire," noting that the "older-man-younger-woman fantasy is troubling, especially in light of the filmmaker's recent controversy." While The Atlantic reviewer Sophie Gilbert said in her review about the darker impulses of the movie that "it’s hard to separate Abe’s murderous urges from Allen’s own desires."

Clearly, these allegations are not forgotten and, despite the small role they play in Allen's latest interview, it would seem that they will continue to be a topic whenever Allen is discussed.