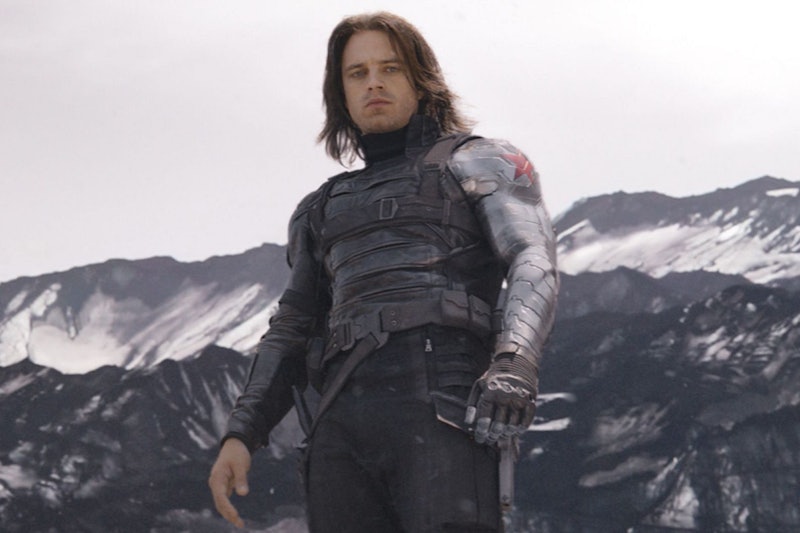 Poor Bucky. Will we ever fully understand Captain America's BFF? Thankfully, The Winter Soldier gets a bit more of his history revealed in Captain America: Civil War as his past is glimpsed in a series of flashbacks. The film even reveals the secret code words that transform Cap's pal into a cold-blooded carnage machine, but what do Bucky's Winter Soldier activation words mean?

In Civil War , the words are spoken in Russian, but are thankfully translated via subtitles. The sequence is as follows: Longing, rusted, furnace, daybreak, seventeen, benign, nine, homecoming, one, freight car. That definitely looks like a deliberately confusing group of words, and Marvel doesn’t make it easy for fans to figure out what they mean. The movie never gives any explanation as to why these words are chosen, and fans of the comics will be scratching their heads as well since this sequence does not appear in Marvel comic books either. At first glance, it would appear to be a completely random collection of words — put together so that it would be virtually impossible to activate the Winter Soldier without knowing the sequence. But are they random? Check out the breakdown of the words below, and the possible meaning behind each one.

This could be symbolic of Bucky's constant state. He, like Cap, is a man out of time — but it's worse than that. Bucky has been forced to live the life of his greatest enemies, and he regrets it every time his memories start to creep back into his brain. Because of this, he is always longing for the past, wishing to go back to a time before the war and long before he ever became the Winter Soldier.

It's a bit of a stretch, but this could be symbolic of what Bucky would be without Hydra (right down to his metal arm). Were it not for Hydra and the experiments performed on him by Arnim Zola, Bucky would now be around 100 years old. But he's not; at least not physically. Bucky looks to be in his 30s and is in very good shape, and is far from the rusted out relic he should be.

This is one of the hardest activation words to decipher. Could it represent a threat of what Hydra will do to Bucky should he ever defect, by putting him into a furnace rather than his usual cryogenic freezing chamber? Is it a clue as to how his metal arm was forged? Maybe it represents the fire to be free that burns inside of Bucky, one that has to constantly be put out by Hydra lest he escape.

Daybreak could easily be symbolic of a new life for Bucky. Bucky Barnes, for all intents and purposes, is dead. He died during World War II, but was reborn as the Winter Soldier thanks to Hydra. With this new identity, the character began a new day, a new dawn, and a new beginning.

The first of three numbers in the sequence, this could be a reference to Bucky's birth year. In the canon comic prequel to Captain America: The First Avenger, Captain America: First Vengeance, Bucky is 13 years old. The story takes place in 1930, meaning he would have been born in 1917. This seems like a rather obvious inclusion compared to the other more ambiguous code words, but hey, Hydra's gotta throw in a few that are easy to remember.

Benign basically means something that is not a threat, something that is dormant. In between activations, Bucky is essentially benign. He is cryogenically frozen by Hydra when not out on a mission, which neutralizes any threat he might pose while awake. By including benign in his activation words, Hydra may be reminding Bucky that it's time to wake up and become a threat again.

The second number in the sequence probably doesn't have anything to do with Bucky personally, but rather his overlords, Hydra. In Greek mythology, the hydra is a monster that has nine heads. It's said that every time one head is cut off, two more grow in its place, representing the nigh-invincibility of Hydra. Another possibility for nine has to do with Arnim Zola, since he has nine letters in his name. Zola became the de-facto leader of Hydra after the Red Skull's passing, and he also was their lead scientist who designed the Winter Soldier project.

Most fans believe this word is an Easter egg reference to the next Spider-Man movie, Spider-Man: Homecoming, as the webslinger makes his debut in the film. That's probably accurate as far as the world outside of the film, but within the film Hydra obviously doesn't know anything about Spider-Man movies. For them, homecoming may simply be a reminder to Winter Soldier to return back to headquarters after completing his mission.

The third and final number in the sequence could mean a lot of things. But since Bucky is the first member of the Winter Soldier program, there's a pretty good chance that he was designated number "one" as a result. Subsequent subjects in the program were probably given other numbers (two, three, etc.) as part of their own activation sequences, but Bucky will always be numero uno.

In his last act before being turned into the Winter Soldier, Bucky falls from the freight car of a train into a freezing river hundreds of feet below. This word seems to be referencing that act, recalling where he was when his old identity perished. So why would Hydra include such a blatant reference to Bucky's past, especially since they don't want him to recall his previous life? Maybe it's to act as a subliminal reminder that he owes them his life. Or maybe they're just sadistic. This is Hydra we're talking about, after all.

These are my best guesses for why Hydra chose the words they did to activate the Winter Soldier. Am I correct? I have no idea, but these all seem like perfectly logical reasons to me.