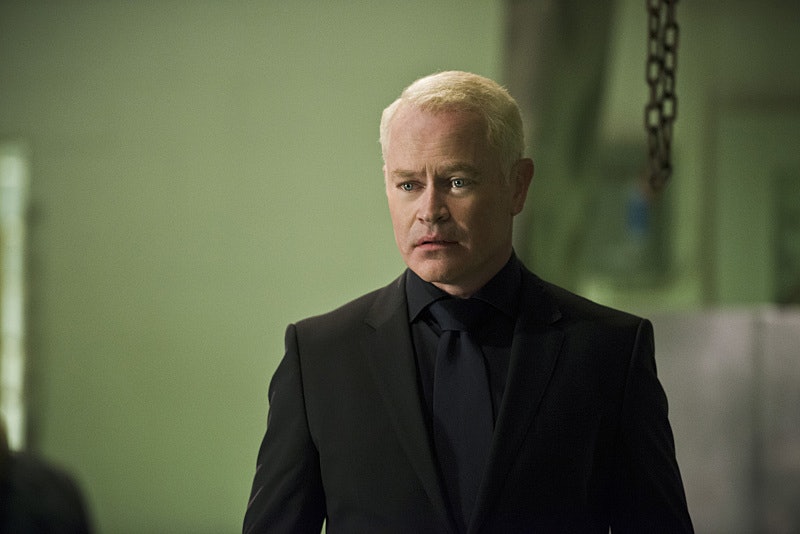 We've known for some time now that Damien Darhk was up to no good, but thanks to Wednesday night's episode of Arrow , Darhk's "Genesis" plan has now been revealed and it's, well, pretty dark stuff. While Oliver and Felicity were off taking magic repelling lessons from an immortal shaman, Darhk was busy setting Genesis in motion, which consisted mostly of attaining the Rubicon chip in Lyla's forearm. What is Rubicon, you may ask? Oh, nothing much. Just the device that's meant to prevent nuclear missiles all over the world from being fired. But given that we're dealing with a villain here, odds are he intends on doing the exact opposite with this missile override device. It's the means of which he plans to destroy the Earth, and much like the old testament of Genesis, start fresh and rebuild once the dust settles.

Sounds pretty terrible, right? Well, unfortunately, the bad news doesn't stop there. You see, if Rubicon is Darhk's version of the great flood that wiped out humanity, then there needs to be ark for those select few who are worthy enough to escape annihilation. And unbeknownst to her, Thea has found herself smack dab in the middle of this HIVE sanctuary.

As soon as Thea made the comment of how she couldn't remember how she and Alex even got to their romantic weekend getaway, I knew something was up. Right now it's still unclear whether Alex is definitely a bad guy or is somehow being controlled, but either way this little vacation of theirs has quickly turned into a Hunger Games-like scenario with poor Thea trapped inside of this Rubicon-proof dome.

The good news is that this means that she'll be protected if Darhk does indeed succeed in launching the nuclear missiles. So there's that. But at the same time, she's now at the mercy of HIVE and has no means to contact anyone from Team Arrow to let them know where she is. So regardless of how you choose to look at it, our gang facing a major threat. Way bigger than even Darhk's magic powers, and I honestly have no idea how they're going to be able to defeat him. (Can we panic now?)