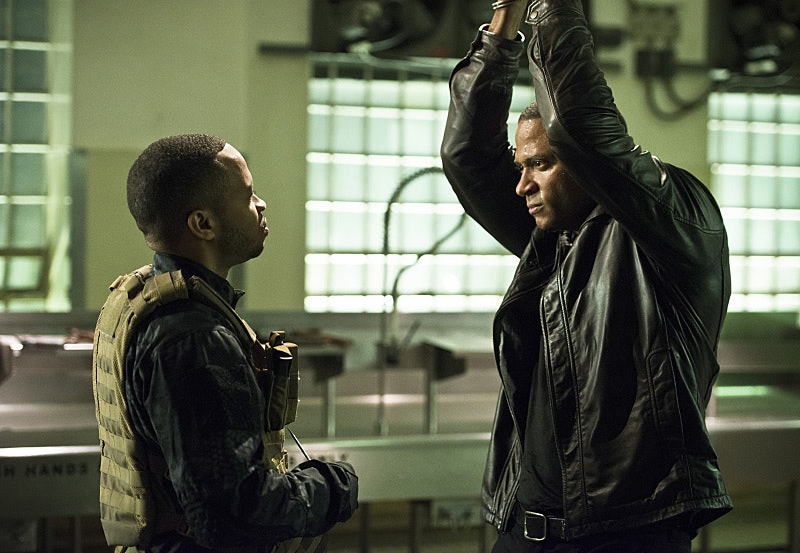 Well, that was certainly an intense episode. Not only is Thea trapped in some Hunger Games-like nightmare, but Diggle and Andy faced off against each other, which resulted in yet another death. But don't expect this one to pull at your heartstrings like Laurel's undoubtedly did, because when you go after Baby Sara, all morals are thrown out the window. That's right, folks — Diggle killed Andy on Arrow after his little bro made it clear that he would keep coming after his family until Damien Darhk's Genesis vision was complete. So Diggle reacted instinctively and put a bullet in his chest. Yes, Andy is dead. And while I can't honestly say that I'm sorry to see this guy go, I'm worried what this will do to Diggle in the aftermath.

Don't get me wrong, I totally understand why he did it. But the fact that he chose to lie to Lyla about how the whole thing went down makes it seems like there's definitely going to be some sort of fallout from his decision. Instead of saying that he shot his brother pointblank while he was completely unharmed, he opted to concoct a version where he said Andy reached for his gun, so he was given no choice. The truth was, though, that he had a choice and this time, he chose to make sure Andy could never go after his loved ones ever again.

Obviously, Diggle's moral compass wasn't exactly pointing due north when he pulled that trigger, but then again when has anyone on this series not let emotions cloud their better judgment? I just hope that the guilt won't force Diggle to spiral even more out of control than he's already been. He hasn't been thinking straight ever since Laurel's death and I'm fearful that adding Andy's name to the body count isn't going to help matters. If we learned anything this episode, darkness has a tendency to attract darkness, and I'd hate to see our beloved Diggle fall further down that rabbit hole.