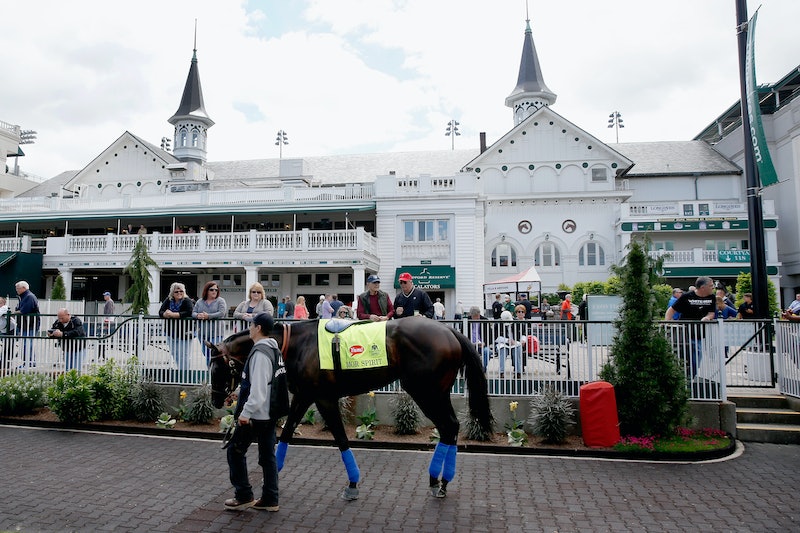 I like to watch the Kentucky Derby. Wait, that's not really true. I like to go to Kentucky Derby parties. There are usually mint juleps, you get to comment on ladies' gigantic hats and sometimes you can even place a bet or two. (I always go for the exacta, where you pick the top two horses in order. I never win exacta bets.) Watching the actual race is fun because you get to see if, unlike me, you win those bets. But, like the Super Bowl, the main event is sort of the secondary attraction. If you're like me and you want to pay the most nominal attention to the big race this year, you probably don't even know where to set the DVR. So, what channel is showing the Kentucky Derby on May 7, 2016?

NBC Sports will cover the Derby from 12 to 4 p.m. ET, but from 4 to 7:30 p.m. ET, the Kentucky Derby will air on NBC. Since the actual race won't occur until 6:34 p.m., make sure you're tuned into NBC at that time. (You can also watch it live online at NBCSports.com/LiveExtra or TwinSpires.com, the latter of which takes bets.)

On NBC, power duo Johnny Weir and Tara Lipinksi will provide color commentary once again and they are basically the best thing about the race. Weir is known for donning a fabulous hat for the occasion. This year's hat is still under wraps, but Deadline reported that Weir will be wearing a tweet-powered brooch to go with it. The brooch will be in the shape of a horse and the more people tweet with the hashtag #WatchMeNeighNeigh, the faster the horse will gallop. (I am not making that up.) Will that be the most outlandish accouterment he's worn? Let's take a look back at some of his best accessories.

It came with its own mint julep. I'm not going to lie — even with a tweet-powered brooch, it's going to be hard to beat this rose-mohawk look.

And The Derby Hat Before That

There's no mint julep in this one, but his 2014 look did have a golden winged horse flying out of a nest of feathers. The real Pegasus must be a little jealous.

He wore this sparkly Mickey fascinator as a presenter at The Shorty Awards. (He paired them with short pants!) It's the kind of thing I wish I could wear out in public, but I totally wouldn't be able to pull off.

Weir sported these sparkly Louis Leeman loafers on the red carpet at the Oscars. They're very there's-no-place-like-home, right?

It's really hard to make athletic support equipment look like it belongs in a fashion shoot, but somehow he did it.

This photo isn't from Sochi, but a similar hot-pink blazer became the talk of the Sochi Olympics — it became his signature look from the Games. I can't wait to see how Weir accessorizes at the 2016 Kentucky Derby... If only I could bet on that.