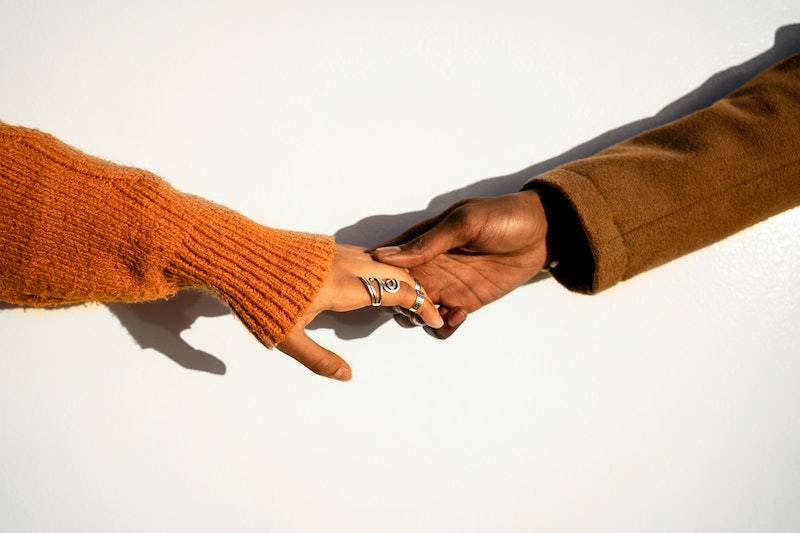 It's easy to see how gender norms affect your own life — after all, they inform most of our daily interactions — but what about the ways gender norms affect your relationships? These days, questioning the gender-based "rules" for behavior dictated by society is fairly common, especially among younger generations. In fact, a 2014 study by the Intelligence Group found that more than two-thirds of Millennials agree that gender doesn't define people the way it used to, and more recent research suggests that the current generation of 13- to 20-year olds are even more open to shaking up gender norms,especially regarding sexuality. (As Broadly succinctly put it, "teens these days are queer AF.")

However, this isn't to say that gender norms have been vanquished for good; the argument could be made that they've just become more subtly enforced. For instance, although women are technically welcome in traditionally male fields of work, socialization beginning from childhood deters many women from even being interested in "male" pursuits — and vice versa. Gender norms are particularly evident in romantic relationships: Men are supposed to pursue women, women are supposed to let themselves be pursued, and any deviations from the norm are given epic side eye, Rihanna-style.

Needless to say, following a set of gender-based rules just because you're "supposed" to simply reinforces the gender binary — and besides, it's hella boring. Let's take a look at six ways gender norms are actually hurting your romantic life.

Part of what makes dating fun is the newness of it: You're getting to know another person, so you're kept on your toes, not knowing what to expect. Well, at least in theory. The details vary, but traditional gender norms emphasize a rigid set of rules for dates: Men ask women out, plan the date, and decide when to kiss them, while women are supposed to sit on the sidelines and let things happen. This isn't to say that there's anything inherently wrong with that structure, but when it's the only approved option, things can get, well, boring. And, of course, it's only applicable for heterosexual relationships, when in reality, there are so many more kinds of relationships in the world.

2. Actually, Same With Your Sex Life

Although you'd think that what people do in the bedroom is their business only, gender norms still manage to sneak their way in. Society teaches us that men are sexual aggressors and women are the objects of their desire — not exactly a healthy way of thinking. (It's also led to a disgraceful lack of research on female sexuality, but that's beyond the scope of this article.) When one person's desire is consistently emphasized over their partner's, a relationship can quickly get boring for everyone involved.

3. Women Are Discouraged From Taking The Initiative

From birth, women are encouraged to subconsciously silence themselves, and that passivity extends to their dating lives. According to traditional gender norms, women are supposed to sit back and allow themselves to be pursued (by men, because heteronormativity). If that's your cup of tea, enjoy yourself. However, when all women are discouraged from taking the initiative, even when they'd rather take matters into their own hands, gender norms become a problem.

4. Men Aren't "Allowed" To Get Emotional

In the same way that society teaches women to be silent and passive, men are taught to bottle their emotions up — save for aggression, of course. Needless to say, surpressing every societally-discouraged emotion is unhealthy for men and the people around them.

The LGBTQ community may be more widely accepted than ever, but pesky gender norms still impact the way society views same-sex relationships. For instance, someone might say that dating a girl "doesn't count" or impose traditional gender roles where there are none: If you've ever been in a same-sex relationship, and maybe even if you haven't, you've undoubtedly heard someone ask the dreaded question, "So, like, who's the man in the relationship?"

6. Women Are Stuck With Household Chores

As more and more women have careers of their own to worry about, you'd think that housework would be divided equally — you know, since she has just as little time to devote to cleaning the bathroom as her partner does. Unfortunately, that's not what happened. Research has shown that women end up shouldering the bulk of housework (and childcare) on top of juggling her own life; in fact, one study found that men end up creating extra chores for their partners when they get married. It may seem like a small matter, but it all adds up to an unbalanced society.

More like this
50 Valentine’s Day Instagram Captions To Post If You’re Single
By Jessica Booth, Lexi Inks and Carolyn Steber
18 Hinge Prompt Answers To Try If You’re Looking For Something Casual
By Lexi Inks
30 Sweet Valentine's Day Caption Ideas For Long-Distance Relationships
By Syeda Khaula Saad and Carolyn Steber
31 Ways To Celebrate Valentine's Day With Your Long-Distance Love
By Natalia Lusinski and Carolyn Steber
Get Even More From Bustle — Sign Up For The Newsletter
From hair trends to relationship advice, our daily newsletter has everything you need to sound like a person who’s on TikTok, even if you aren’t.