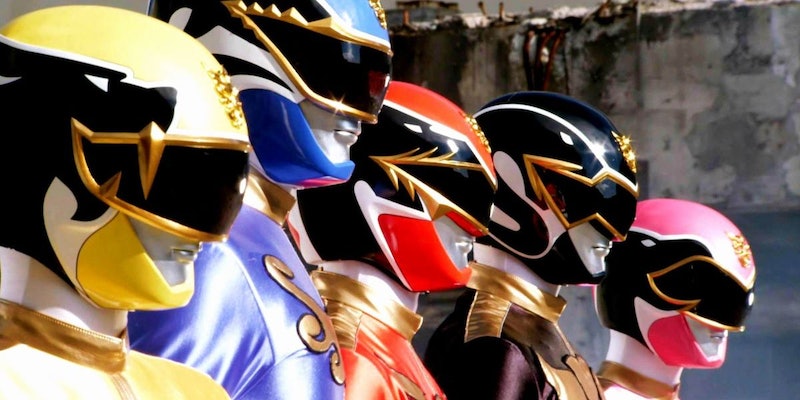 The Power Rangers are back, and they're looking as familiar as ever. OK, perhaps not in the way you might have expected. Entertainment Weekly released an exclusive new look at the original '90s heroes revamped look for the upcoming feature film on Thursday and, as awesome as the costumes look, fans seem to be getting a whole other impression. With the red, black, blue, pink, and yellow suits all holding an armor-like appearance and what appears to be a light on the suit's chest, this team of heroes instead looks like they might belong in the Marvel Universe. The internet seems to think the new Power Rangers look like Iron Man.

But the best part of all of this is that the fan reaction doesn't stop there. Just as the fans did not hold back on their reactions to Rita Repulsa's new look, the internet never fails at a good joke. “It’s tricky finding a new language for a superhero costume,” said the film's production designer, Andrew Menzies, in an interview with EW. “Ours is an alien costume that grows on them, that’s not man-made. You can’t win everyone over, but we are trying to appeal to a more mature audience and gain new fans.” And, hey, you can't blame them for trying. But just take a look at these costumes for yourself.

And the tweets are definitely worth noting.

1. Iron Man Must Be A Fan Of The Show

Could you blame him though?

2. Perhaps This Is The Result Of Superhero Mating?

Let's just laugh at this joke and note think about it too much.

Is this the kind of fight we can look forward to in Captain America: Civil War?

4. Or Maybe Go Ahead And Mess With Iron Man

Because you're clearly #winning.

5. Tony Stark Has Taken Over Another Movie

And some people aren't into it.

6. It's The Missing Link

7. The Announcement Must Be Wrong

I mean, there are rumors of an Iron Man 4.

8. Maybe It's Just A New Project At Stark Industries

He needs some kind of game plan in case The Avengers split up in Civil War.

9. When One Movie Supports Another Movie

It's heartwarming, you guys.

10. Now This Is The Superhero Mash-Up We've Been Waiting For

Who would have thought?

I don't even know what to say.

I need this in my life.

If you're a confused fan, the only place to go from here is the costume shop. As similar as the costumes may be, it's hard to not agree with Power Rangers star Becky G, “It’s the coolest costume ever. I’m gonna wear it for Halloween for, like, five years." I know my inner child is certainly ready.