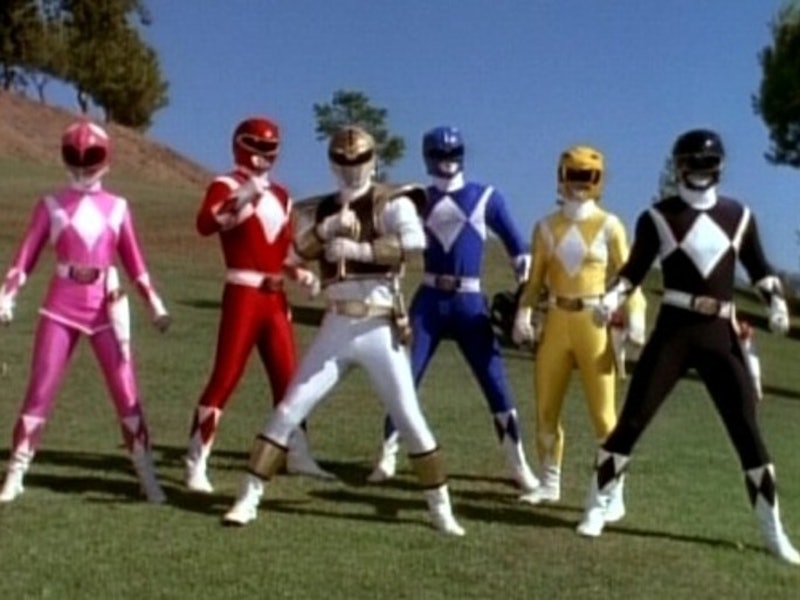 A small part of your childhood died this Thursday when Entertainment Weekly released images of the new uniforms for the Power Rangers reboot. Immediate Twitter cackling exploded at the sight of the Yellow Ranger and Pink Ranger's boob armor, the latest side-eye-worthy attempt to inject sex appeal in a superheroine's costume for no reason. But that's not the only fault in the costumes: the new female Power Rangers are wearing high heels. Have we been missing something? Has this always been a thing?

If you can believe it, the Power Rangers series has gone through 23 incarnations since 1993's OG Mighty Morphin Power Rangers. That makes for a lot of costume changes that, let's be honest, you and I don't all remember. But if you flip through all the different Power Rangers series, you will note that feminizing the costumes is a part of Power Rangers' past. Certain Power Rangers line-ups have the Yellow, Pink, and even the White (when played by a woman) Rangers wearing spandex skirts... and that's going on as far as today's Power Rangers Dino Super Charge. That particular series even has the brilliant female scientist slash Purple Ranger in a skirt. Le sigh. But aside from that, Power Rangers has been pretty consistent when it comes to uniforms, and that includes what they wear on their feet.

Ever since Might Morphin Power Rangers the gang's footwear of choice are boots. Not only that, but year after year the boots are flat, perfect for combat. In certain series you'll see an ever-so-slight lift in the boots, but even when that happens, everyone gets a lift. The boots are consistently functional for ass-kicking, and by all accounts, both modern and vintage costumes show all the Power Rangers on the same footing. So why the change now?

Maybe it's a matter of marketing, because truth be told, this new Power Rangers doesn't look like it's geared for children. It has a more serious, sleeker look than any incarnation of the Rangers that we've seen before. So the new dark and gritty Power Rangers is probably going to have an older audience of nostalgia-sick 20-somethings. And you're not going to sell this idea without a little sex appeal. The heels, like the boob armor, is a little twist that speaks volumes: these women are fighting against evil, but let's not forget that they're eye candy, too.

Now, are the heels as egregious as the boob armor? Well, no, and maybe the boob armor isn't even as heinous as people are making it out to be. If you have breasts that need protecting, then yeah, you need armor that accommodates that. That much I can justify. What's wrong is that the comical prominence of the armor, the way it's situated like they slapped a metal bra on top of the rest of the suit. The execution is bad, to say the least.

And I have similar feels about these shoes. I think we have to give brownie points to the fact that they're not fuck-me stilettos or anything like that, because that could've been a sad possibility. But on sight, there's no advantage to adding them to costumes. For the most part, it feels like a way to unnecessarily feminize a costume, to sexualize this tiny facet of our childhood. It would, realistically, slow these girls a bit down in a battle. But more than that, it's going to make them look stupid.

...OK, not that all those uniforms are really cool in retrospect.

But who knows what to really expect. Perhaps the heel contains a hidden weapon or releases stun spray. Perhaps this film will be such a grand triumph of feminism that tiny details like heeled boots and steel bras will fade into the background. For now, we can only cross out fingers and hope that the Power Rangers movie will morph into something a little better than this first ill-received sneak peak.