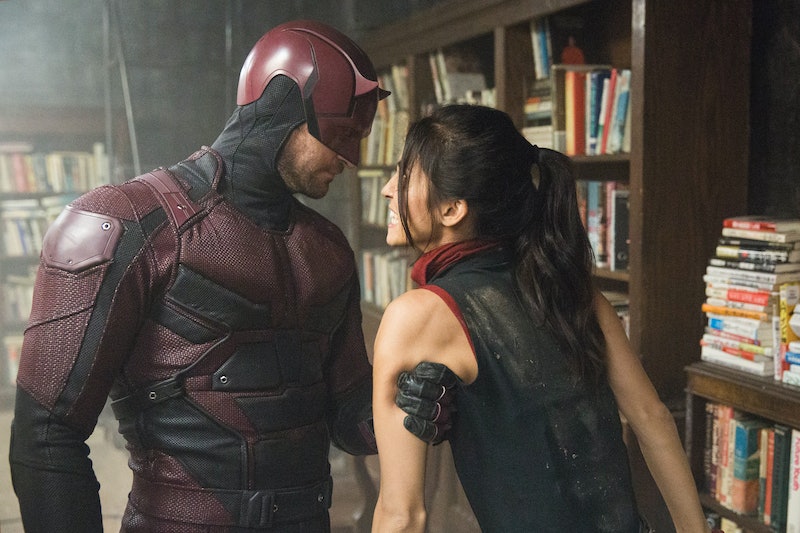 Ever get the feeling that it's Marvel's world and you're just living in it? Say, when you're reading a new comic release while marathoning Jessica Jones on Netflix and buying tickets online for Captain America: Civil War? Marvel Entertainment has a huge reach across several different types of media, and it's tempting to expect crossover, especially between Marvel's television and film properties. And if any Marvel movie seems to invite participation from other the TV crew, it's Civil War. With so many Avengers and allies meeting up on the battlefield, it's plausible that one or more small screen Marvel heroes could be organically incorporated...maybe, for example, the Devil Of Hell's Kitchen? Team Iron Man or Team Cap would benefit from having Matt Murdock on their side. So, is the Netflix version of Daredevil in Captain America: Civil War ?

Sadly, the lawyer-by-day/vigilante-by-night does not join the party in Civil War. (Not enough dark hallways for his comfort? It's a possibility.) Daredevil is busy with the ongoing corruption that's suffocating Hell's Kitchen. Plus, he's got to rebuild his relationship with best pal Foggy and maybe-love interest Karen. Oh, and address that secret society that's resurrecting dead criminals. The bottom line is, the man has things to do, and this fight isn't his. He's still operating in secret anyway; the Superhuman Registration Act won't touch him.

Daredevil does appear in the Civil War comic, but that doesn't mean much since She-Hulk, the Fantastic Four, and a plethora of other random and contractually impossible characters are in there as well. Matt Murdock actor Charlie Cox told Close-Up Film in 2015 that he'd read that series as part of his Daredevil research, but had apparently "missed the boat" on being in the movie. But don't lose hope, Netflix marathoners. It's very likely like Daredevil will make his way into a future Marvel feature or several. At least that's what that paperwork he signed says. Cox said:

I don’t know, Marvel have not mentioned that to me at all. It’s in my contract that if they want me to do it, I’m there, and I would love that. That would be an extension of the dream, but I’m a pretty happy customer at this point, to get to do the series again.

It's not unheard of for content to be shared between Marvel TV and movies. Agents Of S.H.I.E.L.D. sits firmly in the same universe as the Avengers and often references their actions. The team is led, of course, by #1 Steve Rogers fan Phil Coulson; Maria Hill, Lady Sif, and other Marvel movie characters have dropped by for cameos. The emotional center of the first season of Agent Carter is Peggy processing Steve's death and going on with the post-war S.S.R. But the Netflix series (Daredevil and Jessica Jones, so far) are more thematically removed from the Marvel universe you see at the multiplex. (More dark and more twisty, to be exact.) That makes incorporation of those characters challenging.

Civil War co-director Joe Russo addressed the question of Netflix crossover in the next full-fledged Avengers film to BadTaste.it (via ComicBook.com) during a recent press junket. "The Marvel Universe is sprawling — the Marvel Cinematic Universe is enormous. Just think of all the characters that haven't been introduced yet that are going to be introduced by the time that we're working on Infinity War," Russo said. "Anything is possible in the Marvel Universe. It's certainly something we're considering."

I'm sure that reprising Matt Murdock in the upcoming Defenders Netflix series, Charlie Cox has better things to do than sit by the phone. But I wouldn't be surprised if Daredevil were summoned to a Marvel movie set in the near future.