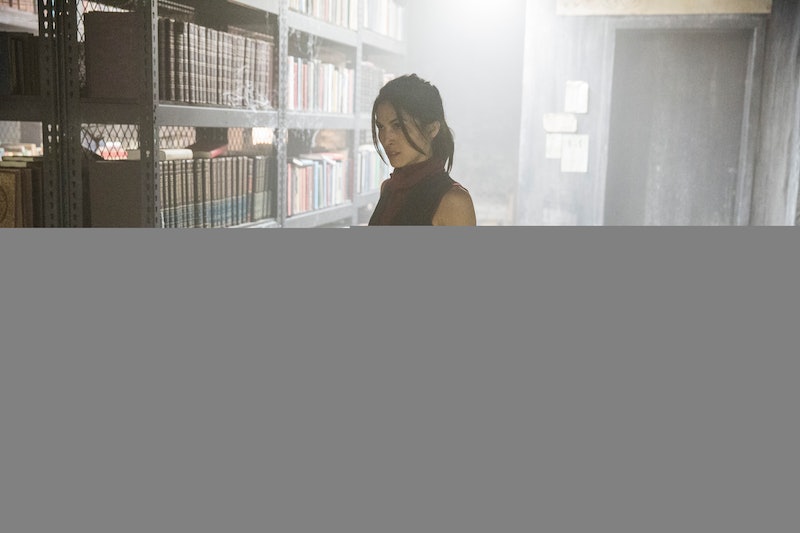 It's weird to think that Matt Murdock, Peter Parker, and Steve Rogers are just a subway ride away from each other in New York, isn't it? Daredevil returns this week and looks to expand the Marvel Cinematic Universe even further. In order to help string the pieces together, I've rounded up the Marvel Easter Eggs in Daredevil Season 2. While I'm breaking them up every two or three episodes so you know when to click away, there are spoilers ahead for Daredevil Season 2.

The Netflix series most strongly connects to Jessica Jones and the upcoming series Luke Cage, Iron Fist, and The Defenders, but it does exist in the same universe as the Avengers movies, Agents of S.H.I.E.L.D. and Agent Carter. While you won't see Samuel L. Jackson making a cameo (especially now, as his character is presumed dead, but that's just details) there are a few hints and references that help connect the world. With Captain America: Civil War set to involve more superheroes than ever before, I can't imagine that the series will not in some way be affected.

Daredevil Season 1 was pretty coy about the world it exists in, save one quick Captain America shoutout and an allusion to the "Battle of New York" alien invasion at the end of The Avengers and a handful of other details. Season 2 is not different, but the world is getting larger and some Easter Eggs are hard to hide.

"Daredevil kicks ass, this whole city cheers like we just won the World Series," Officer Mahoney says in Episode 2. "But this guy? He does it and the streets get bloody. Makes everybody stop and think twice about the whole hero proposition." That's an awfully lot like the argument being set up in the trailers for Civil War — the idea that vigilantes need checks and balances. Karen expresses a similar sentiment later on, and it's clear that groundwork is being laid at a micro level.

Josie's Bar, a popular location from Marvel comics, is back. Also, the bike gang the Dogs of Hell were on Agents of S.H.I.E.L.D. in a major MCU crossover episode that involved the Asgardian Lorelei.

DA Samantha Reyes, a legal antagonist to Matt Murdock this season, first appeared in the season finale of Jessica Jones. She tried to convict Jessica for Kilgrave's death, but was shut down by Jeri Hogarth. Someone talks about "webbing out" — which they probably don't intend as a Spider-Man reference, but I'm counting it. Frank Castle gets a comic-book shout out in Episode 3 when Karen looks at his x-ray, which resembles the Punisher's emblem.

Finally, Claire Temple mentions Luke Cage, but not by name, in Episode 3 as well. Foggy Nelson goes to find her at Metro-General Hospital, and she describes her encounter with the unbreakable man.

When Elektra arrives, she wants to investigate the Roxxon Energy Cooperation, a major antagonist from Agent Carter which has also been mentioned on Agents of S.H.I.E.L.D. and in the Iron Man movies. In the comics, it was responsible for the deaths of Howard and Maria Stark. Jessica Jones is also mentioned by Marci in Episode 5. It appears that Marci is now working at Hogarth's firm.

Now we're really cooking with gas. Stick returns in Episode 8 and brings with him the legend of The Hand and The Chaste, two organizations from Daredevil lore in the comics that will carry over into Iron Fist. Speaking of Danny Rand, there's a false alarm in Episode 9 and 10. We meet a Daniel who is the son of an accountant for The Hand, named Stan, but they aren't Rands.

In Episode 9, Frank Castle learns that the man behind the massacre that killed his family is known as the Blacksmith — who in Marvel comics is a Skrull alien, so that's fun. Wilson Fisk also started to take up his comic book moniker "Kingpin" in that episode as well.

In Episode 10 (and you may have caught it earlier if your eyes are more shrewd than mine) a framed paper at the New York Bulletin reads "Cybertek Settles." That's the organization introduced in the beginning of Agents of S.H.I.E.L.D. which was run by Hydra and "created" Deathlok.

In the final stretch, the references are a little more spread out. The show goes deeper into it's own mythology with The Hand, The Chaste, and Black Sky. However, Jeri Hogarth from Jessica Jones shows up in the Season 2 finale and offers Foggy a job at Hogarth, Chao, and Benowitz. Melvin Potter also gives Daredevil an upgraded billy club, and looks like he might be suiting up Elektra as well. Finally, in the final battle sequence, Frank shows up in his official Punisher costume, and in the tag, Elektra is wearing her official red outfit.

To cap things off, this may not technically be an Easter Egg, but if you let the credits of the Daredevil Season 2 finale play, the first teaser trailer for Luke Cage will autoplay on Netflix. It's definitely worth watching, especially if you've already finished Daredevil and can't wait for your next Marvel fix.