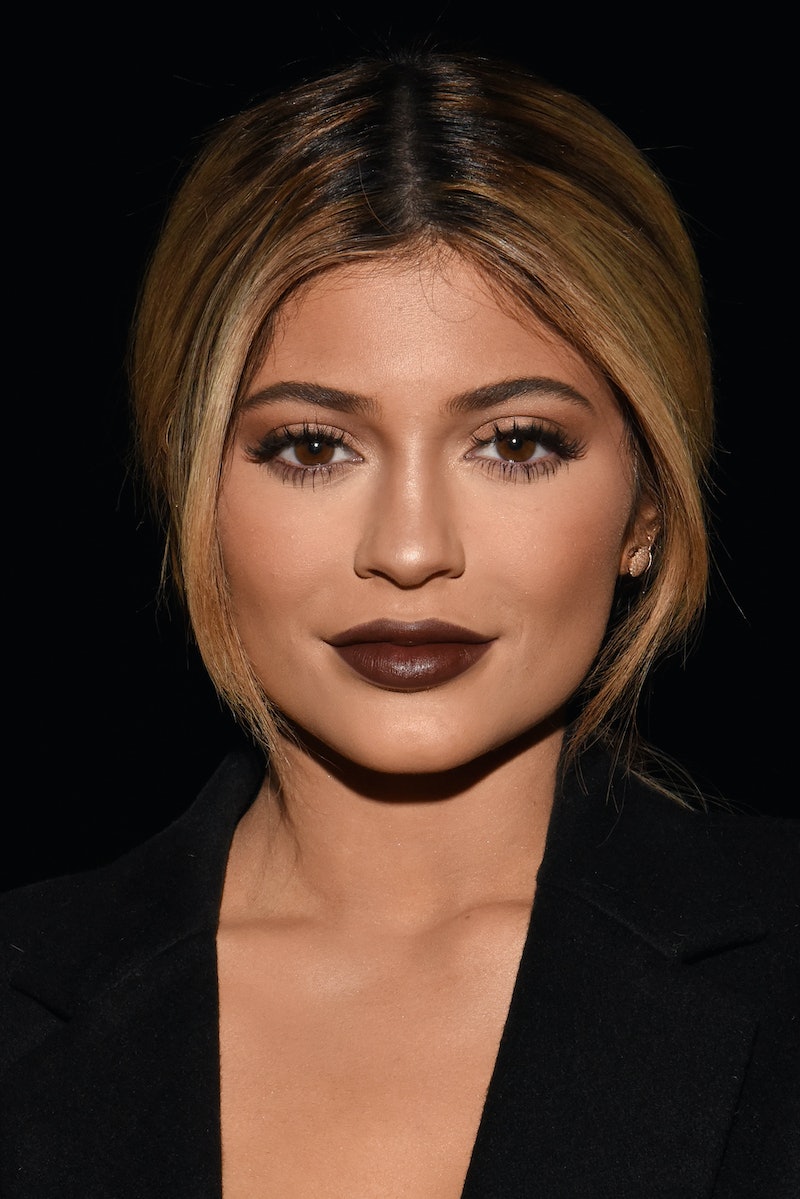 The Lip Kit colors keep on rolling, but it looks like fans are ready to see something other than neutrals. Kylie Jenner asked her fans what lipstick color she should do next on Twitter, and the response was overwhelmingly, well, dark. Although it doesn't seem likely that Jenner will stop creating light shades anytime soon, you never know what the social media star will do next.

With eight different shades already in the collection and three more on the way, over half the colors in the Lip Kit family are neutrals. Considering that is what Jenner herself loves to wear, it only makes sense that she'd create hues she is personally drawn to. But now she's asking her fans what they want to see, and people are seriously hoping that a black Lip Kit is in the works. Would it be completely practically? Heck no, especially not for summer. It would be a bold makeup move though. Not to mention it would make many of her fans happy.

People went crazy for the purple Kourt K, which is currently the darkest in the collection, when it first came out. It was something completely different for Jenner. Her True Brown K shade was also an instant fan favorite, so I'm sure the black would be just as big of a hit.

Considering that Jenner just announced the launch of another neutral Lip Kit named Exposed, it doesn't look like a black will be here anytime soon. Plus she posted a black and white colored sneak peek on her Snapchat of the secret shades a while back and none of the colors looked dark enough to be black.

A black Lip Kit might not be currently in the works, but Jenner loves to listen to what her fans want. It's possible that she could see just how many people are looking for the bold color and add it to the collection for the next launch. It might be unconventional, but just look at how excited people would be over the addition.

At least it was a nice request.

That does look pretty darn good.

An even deeper purple than Kourt K?!

I love the name.

The exclamations speak for themselves.

Caps lock is a must.

Not going to lie, a metallic black would be really cool.

The girl does love her throwback shades.

Proof that it would look amazing.

I never would've thought that people would want a black lipstick so much.

More like this
M.A.C. Cosmetics' Black Friday 2022 Sale Includes Major Lipstick Deals
By Audrey Noble
Jennifer Lopez's Holiday Pedicure Has The Most Glam Snowflake Design
By Olivia Rose Ferreiro
Dua Lipa On YSL Beauty, Plus Her Fearless Approach To Hair & Makeup
By Erin Stovall
All The Products Hailey Bieber Used For Her Birthday Makeup Look
By Olivia Rose Ferreiro
Get Even More From Bustle — Sign Up For The Newsletter