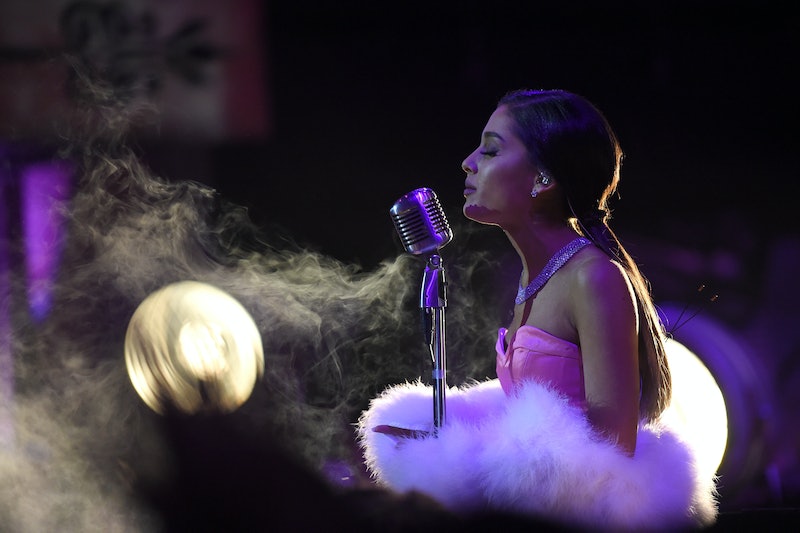 You've tried pretty much everything. The encouraging arm touch. The cuddling up and watching Adventure Time together. And they seem into it, albeit in an awkward, blushing, stuttering kind of way, but they're too darn shy. Are you doomed to sit stiffly next to each other on your sofa for the rest of eternity? Hell no, the new Ariana Grande song "Into You" is here, and it's like a line by line string of text messages to send your shy crushee to take this thing from Just Friends to Just Never Not Kissing Each Others Mouths.

Grande's third album Dangerous Woman is all set for its May 20 release, and "Into You" is the fourth single. It's a particularly strong track, given that it's the fourth single off the album so far: there's a minimal club beat background while Grande croons about her desire to "fall in deep" before crescendoing into the thumping chorus which you're going to want to shake your thing to. It's the two in one shampoo/conditioner of singles: on one hand, a deeply romantic ballad, on the other, a stomping dance track.

So which parts of it are the best lines to send to your so bashful crush?

Sure, there's zero chill here. But, hey, someone has to make their move.

3. "But Close Ain't Close Enough 'Til We Cross The Line, Baby"

"I know!" s/he texts back. "You're so special to me." Then you come back with this. What line, they may ask? The smooching line, obviously.

'Cause it takes two to tango.

5. "The Temperature's Rising In Here"

At least in your pants, anyway.

Great question. They can only say yes/no. No more ducking or diving.

7. "Been Waiting And Waiting For You To Make A Move"

8. "A Little Less Conversation And A Little More Touch My Body"

At this stage, why be coy?

9. "Got Everyone Watchin' Us, So Baby, Let's Keep It Secret"

Better hope his/her BFF isn't sat next to him while s/he's getting all these saucy texts.

10. "I Made Some Mistakes/Let's Get This Right, Right, Baby"

You're only human. You went to high school or college and made the same mistakes that kids do. But you're serious about doing it right this time round. And maybe, by emphasizing that you're a fallible human being, your crush will take you off that pedestal and into their arms.

You've laid your cards on the table. Now the onus is on them to make their move.

Grande was clearly put onto this planet for one reason only: to solve our shy-crush issues via her skilful wordsmithery. It'd be just plain rude not to take her up on her offer. So ready, set, TEXT.