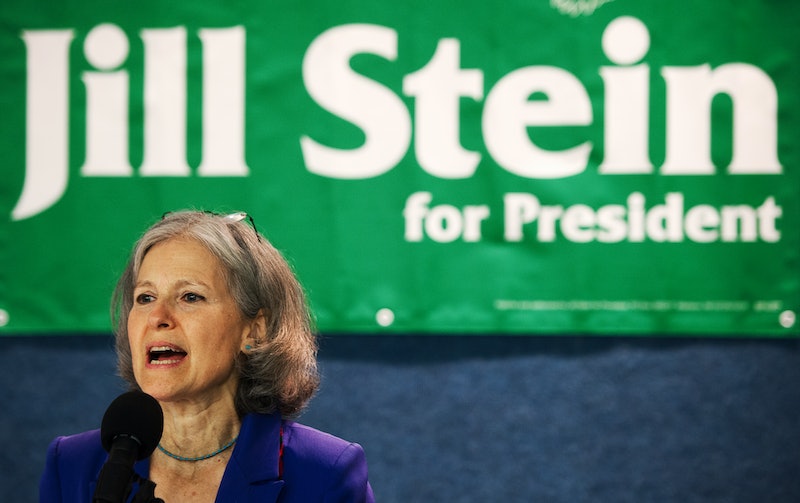 In spite of what you may have heard, former Secretary of State Hillary Clinton is not the only woman running for president this year. The Green Party's likely nominee, Jill Stein, is running on a much more progressive platform, and is attempting to crack the two-party system status quo. A Massachusetts resident, Stein ran for the presidency back in 2012, when she received 469,627 votes in the general election. This time around, she has already called on Vermont Sen. Bernie Sanders to join her in building a political revolution outside the Democratic Party establishment, and has drawn the attention of many Sanders supporters who would rather vote to his left than for Clinton if he ultimately loses the Democratic nomination.

So where does Jill Stein stand on issues like gun control, Palestine, and the War on Drugs? She definitely falls to Sanders' left on the first two issues, so imagine the potential a Stein-Sanders ticket could have in changing the way the American political system works. Some Democrats worry that, if Clinton is the nominee and Stein provides her with some serious competition, we could see another Ralph Nader situation, but if Sanders wants to sustain the grassroots political movement that he has helped to build, then his best bet might be to help the Green Party poll high enough to be included on the debate stage and receive federal funding in the next election.

According to nonpartisan organization On The Issues, Stein believes that gun control should be appropriately regulated with local regulations and more background checks. In addition to calling for an assault weapons ban and increased access to mental health services, she has called for an end to drug violence by ending the racist War on Drugs. Like Stein, Sanders has also called for a semi-automatic assault weapons ban and an end to the gun show loophole, but he has only gone so far as to call for better mental health care. Stein has been better able to speak to the systemic nature of the gun violence culture that we've created, explaining to RT back in 2013 that just because there are more arms available to people does not mean they are actually any safer:

It’s a very complicated problem, but that said, there’s a lot we can do about it. And while rates of violent crime and gun homicides have gone down over the last two decades, really they are still sky high compared to what they could be — and what they should be. We have about 100 times the rate of gun homicides and violent gun crimes relative to many countries of Western Europe and we should not be in the business of normalizing violence. It’s clear there is a relationship between gun violence and economic violence and poverty, and racial disparities and economic disparities. And the more we become an unjust society, the more we are at risk for continuing gun violence and potentially growing gun violence.

Stein firmly supports the legalization of marijuana and hemp, and has consistently advocated for an end to the racist war on drugs. She has gone several steps further by discussing the connections between the War on Drugs and the school-to-prison pipeline, the militarization of police forces, the disproportionate incarceration rates of people of color, and the widespread nature of surveillance. In her discussion of the War on Drugs, Stein has been explicit in her commitment to decriminalize drug use and addiction.

Sanders is also quite progressive on this issue, advocating for the decriminalization of nonviolent drug use and an end to the War on Drugs, recognizing its disproportionate impact on people of color — albeit from a more economic point of view. He has stated his support for the legalization of medical marijuana, and has said that he would personally vote for the legalization of recreational marijuana to reduce incarceration rates, though he said that if legislation on the matter were to be passed on the federal level, then states should be able to opt out or create their own regulations.

Stein has evolved over the years in her critical position of Israel. She has previously said that she would hold all parties — Israel, the Palestinian Authority, and Hamas — accountable, but she has recently become more explicit in her condemnation of Israeli occupation and apartheid. She has called for an end to U.S. aid to Israel, and has voiced the Green Party's support of the Boycott, Divestment, and Sanctions movement.

She has gone so far as to criticize Sanders' pro-Israel stance:

Sanders has not been uncritical of Israel; indeed, in a speech that was meant to be delivered at the annual AIPAC conference, he opposed Israeli Prime Minister Benjamin Netanyahu's approval of more settlements in occupied Palestine, and reiterated his condemnation of Israel's attacks on Gaza in the summer of 2014. But he has often called for compromise from all parties, even though all parties are not on a level playing field, and it is this aspect of this argument that makes Stein's position on this issue more progressive than his.

Stein and Sanders line up on most other issues, including climate change and the unacceptable role of Wall Street in American politics. They both disapprove of Clinton's hawkishness and prefer minimal foreign entanglements. But the big difference between them isn't as much their platforms as it is the ways in which they are choosing to approach the political revolution they both want to see. While Sanders went the Democratic Party route despite running as an independent, Stein wants to see a government that encourages participation by more than just two political parties, and has been working hard to break ground on that issues. If Sanders loses the nomination during this primary season, it would be worth it for him to at least have a discussion with Stein, to sustain the unforeseen amount of mobilization and energy that he has helped to generate.