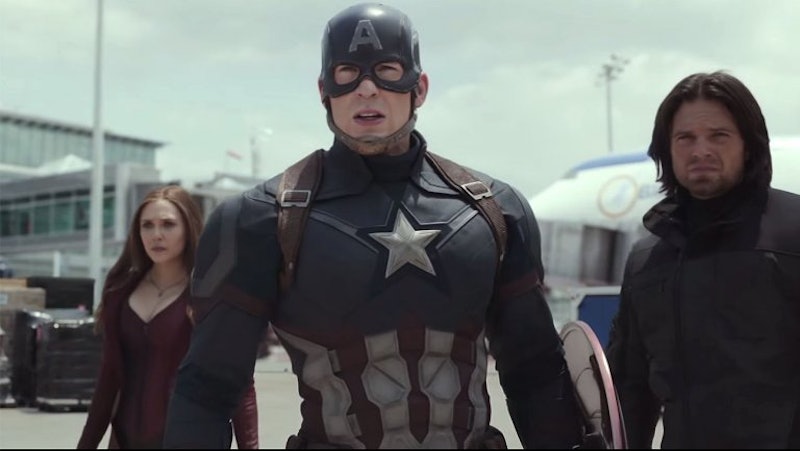 With so many heroes packed into Captain America: Civil War, it can be easy to forget the first half of that title. But despite the focus on characters like Iron Man, Black Widow, and more, Civil War is a Captain America movie, not The Avengers 3. For screenwriters Christopher Markus and Stephen McFeely, maintaining that focus on Cap was easy, as they tell Bustle that it all came down to one factor: Bucky. "We were figuring out the plot for Captain America 3 ... and it kind of turned into Civil War because of the plot we came up with, which was a very Cap-centric plot," Markus says. "We kept that even though it morphed into Civil War, so everything is still stemming off of the central spine of Cap and his emotional bond to Bucky, basically."

McFeely, who also wrote the first two Captain America movies with Markus, agrees. "Once you put Bucky in the mix, you give Steve something to choose over siding with his friends, and that’s where a lot of the tension comes from." As anyone who's already seen Civil War can attest, that may actually be an understatement. Throughout the movie, much of the strife between the Avengers is caused not just by the potential ramifications of the Sokovia Accords, but differing opinions on how to deal with the former Winter Soldier. Spoilers for Civil War ahead.

While everyone can agree that Bucky did horrific things while under Hydra's control, Steve sees through them to the kid he grew up with in Brooklyn, and because of that needs to keep his friend safe — even after Bucky is framed for causing a terrible tragedy. Other Avengers, especially Iron Man, see Bucky as nothing more than a threat and want to treat him as such. This is where the emotional toll of Civil War manifests. Because sure, the Sokovia Accords are a point of contention, but at the end of the day, that's just politics. The conflict over Bucky becomes much more personal — especially to Steve and Tony — and deepens the cracks created by the Accords.

Those complex emotions are not only what ground Civil War as a Captain America movie, but to the writers of the franchise, what sets all Cap movies apart from the rest of the Marvel Cinematic Universe. "It really is all one story, this fulfillment arc of this 90-pound guy with one friend in the world and how those two things evolve over the course of 100 years," Markus says. "So it is, a kind of ongoing maturation in a weird way. I think [Cap has] finally a grown up by the end of this movie."

And while McFeely thinks Cap is different from other, more "flawed" heroes because "he’s never coming around to the right way of thinking late in a movie, mostly he has to make the world change to fit his point of view," when discussing the Team Cap vs. Team Iron Man debate, Markus reveals that he believes Cap's emotional motives complicate that point of view. "In some ways, though it is a Captain America movie and we’re biased towards Cap, he’s almost on more dangerous ground than Tony, because he’s acting, essentially, personally," the writer says. "But we know why and we empathize."

It may be a Captain America movie, but by the end of Civil War, it's hard not to sympathize with both sides.