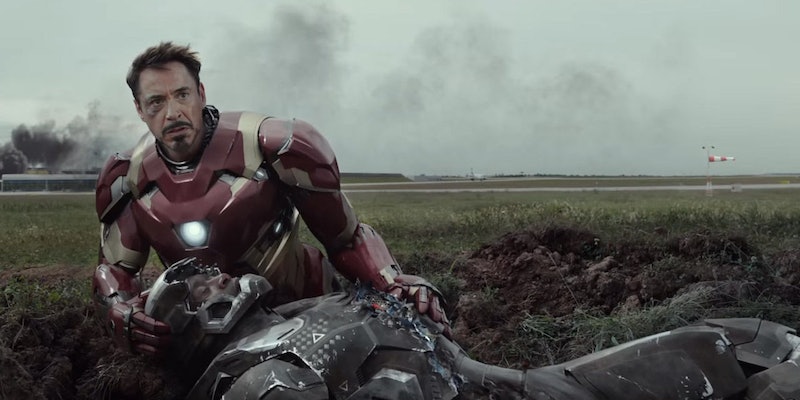 In the weeks leading up to May 6, one question was on Marvel fans' minds: Who would die in Captain America: Civil War ? Between ominous scenes in the trailers and the very premise of pitting Avengers against each other, the film seemed poised to deliver a heartbreaking death. Spoilers for Civil War ahead. However, it turns out everyone's theories were wrong, because no Avengers die in Civil War. But before you call their decision to keep these heroes alive a cop-out, the film's writers, Christopher Markus and Stephen McFeely, tell Bustle that there's a very good reason everyone survived. In fact, they never even considered killing off any of the Avengers because they had a very different goal in mind.

"I hope people aren’t disappointed that everyone survived," McFeely says. "The goal was to sort of shatter them and leave them vulnerable for Thanos when he shows up in the next two [Avengers] movies. And we want those people in those movies. So, let’s say we killed Captain America, we would just have to resurrect him in some crazy way, and then we’d get accused of, 'nobody ever dies in the Marvel universe.'"

In Civil War's corner of the MCU, there was a specific, emotional purpose for not letting anyone die, which Markus explains.

"On a certain level, if you take it seriously enough, a fight between friends or family is more emotional than a death, in a way. A death, one it becomes almost melodramatic, and… death is weirdly unifying. Everyone stops and goes, ‘Oh what are we fighting about? Look at this tragedy.’ When you have a giant fight at the Thanksgiving table and people storm off and don’t come back for a couple years, it’s actually in a way more wrenching."

Heartwrenching is the perfect way to describe the dynamic between the Avengers by the end of Civil War. They weren't forced to mourn one of their own, but things between them have been changed irrevocably. Logistically, the Sokovia Accords will make coming together in times of crisis harder than ever before and even when the Avengers do assemble, it won't be the same. They've all hurt each other and it's hard to forget a betrayal. Even in the case of heroes like Black Widow, who switched sides, no one can take back the difficult decisions they made, or going against their friends.

Letting all of the Avengers walk away from Civil War physically unscathed, but with the emotional scars of war, may have been the boldest decision McFeely and Markus could've made.