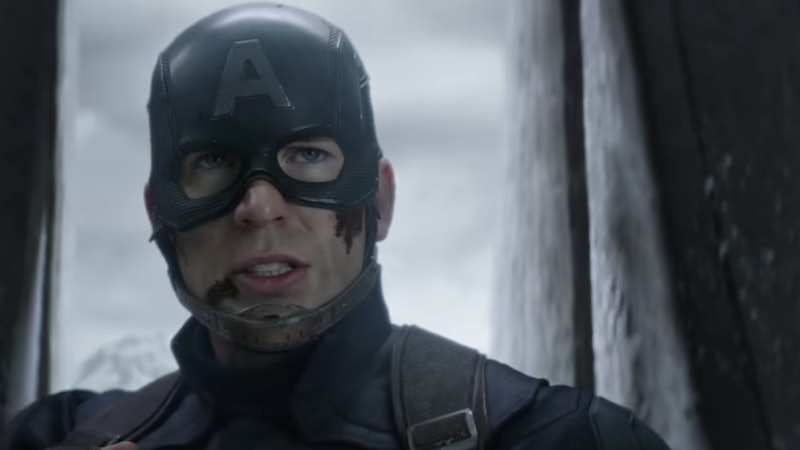 Phase Three of the Marvel Cinematic Universe has officially begun with Captain America: Civil War, the most epic entry yet in the record-breaking franchise. The movie sets a wildly different tone from the other Marvel movies coming before it, with the Avengers split down the middle in an all-out war over the direction of what it means to be a superhero in this world. And the Captain America: Civil War ending shows that with this many superheroes doing battle (12, if you're keeping track), a lot of damage is sure to occur.

First, you should probably understand what it is the Avengers are fighting about. The disagreement begins over a document called the Sokovia Accords. This agreement would give the United Nations jurisdiction over the Avengers, allowing that organization to dictate if and when the team acts. Iron Man is in favor of the document, but Captain America opposes it. Things remain friendly until a terrorist attack interrupts the ratification of the Accords. The Winter Soldier, AKA Cap's pal Bucky, is blamed for the attack, but Cap thinks he's innocent. Cap then finds Bucky before the authorities do and vows to find the truth, while Iron Man is sent to apprehend them. And what follows next is nothing short of spectacular.

The battle comes to a head in an airport in what is inarguably the greatest fight sequence in superhero movie history. Team Cap, consisting of Scarlet Witch, Ant-Man, Winter Soldier, Falcon, and Hawkeye, go head-to-head with Team Iron Man, which contains Black Widow, Black Panther, Vision, War Machine, and Spider-Man. The battle rages with a number of great moments, with Ant-Man becoming Giant-Man chief among them.

Cap never wanted to fight; he only wants to track down Zemo, who he learned is responsible for framing Bucky for the terrorist attack and who he has reason to believe is raising an army of Winter Soldiers. So during the battle, using Giant-Man as a distraction, he and Winter Soldier make their way to a quinjet in order to make their getaway. They are confronted by Black Widow, who decides to let them go, effectively joining Team Cap. Black Panther tries to stop them, believing that Bucky killed his father in the Accords attack, but Black Widow incapacitates him.

While Cap and Bucky make their getaway in the quinjet, Iron Man and War Machine attempt to intercept them, but are tailed by Falcon. Vision attempts to blast Falcon out of the air, but instead hits War Machine. Iron Man's BFF falls from the sky and nearly dies, effectively ending the battle and making Iron Man really mad as Cap and Winter Soldier escape.

Iron Man Turns Against... Himself

Tony Stark visits the members of Team Cap, now in prison, and starts to feel some remorse. He also learns the truth about Zemo and the terrorist attack, and heads to the Winter Soldier compound in Siberia to aid Cap and Bucky. He is followed by Black Panther, who also learned the truth, and who now targets Zemo as the killer of his father rather than Bucky.

Iron Man arrives and explains that he's now on the same side as Cap and Bucky. After some initial tension, the three of them work together to track down Zemo. They soon find the other Winter Soldiers and discover they've all been murdered, realizing that they were only used as bait to bring them to Zemo. Zemo then reveals his master plan to turn the Avengers against each other, as he is Sokovian and lost his family in Avengers: Age of Ultron and blames the team for their death.

Zemo then pulls the Ace from his sleeve, and shows the trio a grainy video of a 1991 car crash. In the car are Tony Stark's parents, and the crash was caused by Bucky, who subsequently murders both of them in the video. Stark asks Cap if he knew about this, and he reveals that he did.

Iron Man wants to kill Bucky for killing his parents, and he takes on Cap and Bucky at the same time. The battle is pretty even until Iron Man blasts off Bucky's metal arm, taking him out of commission. Cap then gets the upper hand in close combat, until Iron Man's suit learns his fighting style and overpowers him. Iron Man is then set to blast Cap, likely killing him, when Bucky reaches up with his one arm and pulls him to the ground. Cap then body slams Iron Man and gets on top of him. He breaks his face mask off with his shield, and when he has the chance to deal a killing blow, he instead strikes him in the arc reactor; shutting down his suit. He and Bucky leave, and Cap leaves his shield behind when Iron Man says he doesn't deserve it.

Zemo goes outside and is confronted by Black Panther. The villain attempts to commit suicide now that his plan has been completed, but Black Panther thwarts him, deciding to take him to the authorities alive rather than kill him.

Next Time On The Marvel Cinematic Universe

Stark is helping Rhodes learn to walk again, and dealing with the aftermath of the Civil War. In a cameo, Stan Lee delivers a letter to Stark from Cap, which tells him that he can have the Avengers, but if he ever needs him he'll be around. He also says that he can't let his friends stay in prison, and the last thing you see before the credits is Cap about to bust them out.

Since this is a Marvel movie, there are two scenes after the movie "ends." In the first, Cap takes Bucky to Wakanda, where Black Panther agrees to keep him safe as he reenters cryostasis. He also implies that he's ready to take on anyone who might come looking for him. In the second scene, Peter Parker is back home in Queens playing with some tech given to him by Stark, and has to hide it from his Aunt May. The two scenes mainly serve to tease Black Panther , coming in 2018, and Spider-Man: Homecoming , which arrives next year.

And that's it! Civil War is a big, big movie, and a lot of awesome stuff happens before the endgame begins, but these scenes combine to make one giant climax. The film might be Marvel's best effort yet, and should have fans pretty psyched about what's to come.