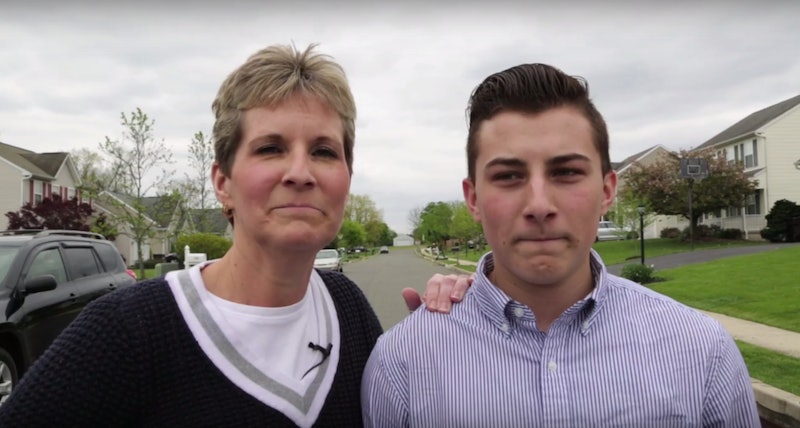 This Mother's Day, it's important to remember that not everybody has the unconditional love and acceptance from their parents that's celebrated on Hallmark cards. LGBT people especially often struggle with their family's feelings about them. But "Meet My Child: Parents of Transgender Kids Speak Out" video shows the opposite: moms who support their transgender children regardless of their gender identities and suffer because the rest of the world doesn't.

Many of the moms talk about not understanding what it meant to be transgender and not wanting to accept who their children were at first. However, they eventually came around and realized that their kids needed their support in a world that otherwise didn't support them.

The video points out that there have been over 50 pieces of anti-trans legislation in 20 states over recent years. One mom in particular talks about the impact of "bathroom bills," which prohibit people from using restrooms that don't match their gender identities, on her and her son. "He wants you to go into a girls' bathroom," she says in disbelief as a video of Ted Cruz calling people against the bill "zealots" plays. "Even if they don't support it, just try — even if it's the principle, just respect," the boy says.

Another mom is deeply concerned about the violence committed against trans people. Trans youth are in fact at higher risk for both physical and verbal abuse. Seventy-two percent of anti-LGBT homicides were committed against trans women, according to a National Coalition of Anti-Violence Programs report. And due to the hate often directed toward them, 46 percent of trans men and 42 percent of trans women have attempted suicide, according to a Williams Institute analysis. The rate differs depending on family acceptance, which shows why it's so important for parents to accept their transgender children.

On this note, one mom has a powerful message to give her child: "I know who you are. I love you. Don't be scared. Don't be concerned. Never — because I am with you and I love you." Another has a message to all of us about people like her daughter: "They're your neighbor. They're your friend. They're your co-worker." With some politicians currently trying to convince us trans people are predators, that's a message many people in this country could stand to hear.

Watch the full video below.

More like this
Footballer Jake Daniels Shared His Thoughts On A World Cup Boycott
By Sam Ramsden
10 Thanksgiving Alternatives You Can Celebrate This Month
By Katie Mitchell
Are Sagittarius & Sagittarius A Good Match? Astrologers Weigh In
By Kristine Fellizar
Are Sagittarius & Capricorn Compatible In A Relationship? Astrologers Weigh In
By Kristine Fellizar
Get Even More From Bustle — Sign Up For The Newsletter