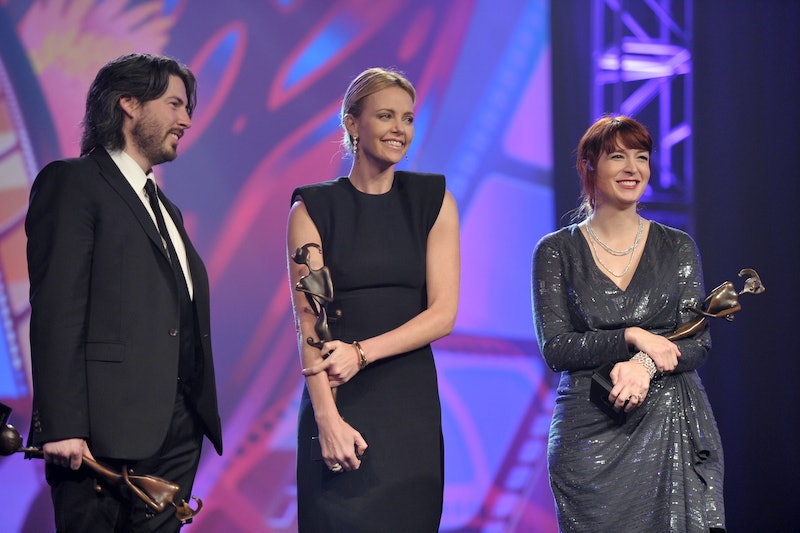 We've waited five long years since Diablo Cody and Charlize Theron last collaborated on a project, 2011's challenging but moving "comedy," Young Adult. Bron Studios announced on Friday, May 5 that Cody, Theron, and Young Adult director Jason Reitman would all be reuniting for the indie-comedy Tully. Tully will spin the story of “Marlo (Theron), a mother of three including a newborn, who is gifted a night nanny by her brother. Hesitant to the extravagance at first, Marlo comes to form a unique bond with the thoughtful, surprising, and sometimes challenging young nanny named Tully.”

While details on the project are slim, they suggest the sort of intelligent comedy we've come to expect from a Cody/Theron team-up. Young Adult was one of the most challenging comedies I've ever seen — business as usual for Reitman, who also helmed Up In The Air, an ostensible rom-com with a sting in its tail that (spoiler) left its handsome businessman (George Clooney) both woke to how depressing his no-strings-attached business travel lifestyle was and completely alone. Young Adult was that most unlikely of films: a script written by a feminist about an aging, single woman that wasn't afraid to make her completely unlikeable.

Theron's character Mavis Garvy is an alcoholic ghostwriter for young adult romances who decides to drive back to her hometown and try and persuade her ex-boyfriend from high school to break up with his wife. The catalyst for this? An email from aforementioned ex announcing his wife's pregnancy. The film doesn't make any apologies for Garvy's behavior. She's shown to be completely ruthless in her pursuit of her desires and perhaps that's what makes the film such a brutal combination of laughter and shock.

All of that makes Theron the perfect ying to Cody's yang. As films like Monster have proved, Theron's as happy to play challenging, difficult-to-like women as Cody is to write them. This seems one of the most likeable things about Theron: her need to play roles which embody emotional ugliness offsets her beauty and forces audiences to not simply dismiss her as another model-turned-actress.

Tully sounds like rich pickings for Cody and Theron, who are both keen observers of class. While details are a little skimpy, the tension a wealthier (let's assume) brother paying for a night nanny might create seems ideal for Cody's distinctive brand of difficult, nuanced comedy.

Cody and Theron are both extremely talented on their own, but together, they're capable of some real magic. With this announced, and the all-female Ghostbusters remake coming out, it's shaping up to be a great year for anyone who supports smart lady-led comedy.