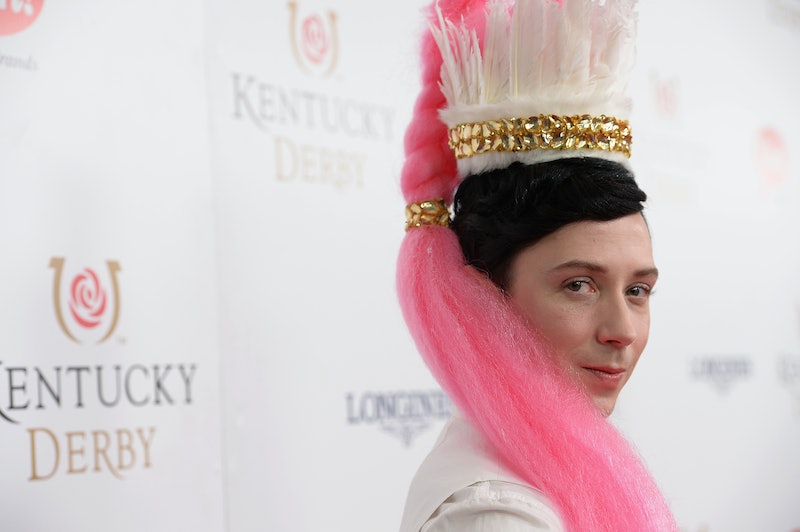 The 142nd Kentucky Derby was absolutely magical. Don't you think? The fashion! The horses! The mint juleps getting guzzled by the gallon! But the best part? All the celebrities who came out dressed to the nines. With so many celebrities at the Kentucky Derby, making the rounds at Churchill Downs this year, who stole our hearts the most? Hands down, it was one of the Derby's fashion and cultural correspondents aka Johnny Weir. Don't believe me? I think it's high time that we take a moment and reflect on the many ways that Weir won the 2016 Kentucky Derby and turned our heads away from the horses.

It's no secret that Weir has a knack for entertaining the audience, who tune in as much for him and Tara as they do for the horses. Suffice it to say that, at the Derby this year, Weir stole the show and our hearts in a way that only he could. He is a skilled showman; it was no different this time around. When images came pouring in of his beautiful Derby hat (or is more of a crown?), we all fell in love. That cascading pink braid brought the serious "My Little Pony realness," as Weir put it. I was hooked! You were hooked! What would Weir do next?

Well, next, Weir inspired a nation to unite under a common hashtag. It was called #WatchMeNeighNeigh, and neigh we did. Weir ensured that all our Tweets and Instagrams came equipped with that perfect hashtag by wearing the most. perfect. pin. ever. created. Affectionately named Lawrence, the pin would light up every time someone used the #WatchMeNeighNeigh on social media. Bless you, Lawrence, and your magical powers. It was a sincere delight to watch you gallop down that imaginary track.

Weir even made the perfect bartender. During what should have been an awkward segment, Weir and his co-host Tara Lipinski created a very delicious but very expensive ($25,000!) mint julep. With every flick of the wrist, he made this moment extra luxurious. What did we do to deserve the magic of Weir?

Looking back on this Kentucky Derby, it was a little stuffy at times. At others, it was full of unexpected surprises. But the best part of the festivities was far and away Johnny Weir. I can't wait to see what he adds to his coverage of the 2016 Summer Olympics in Rio.