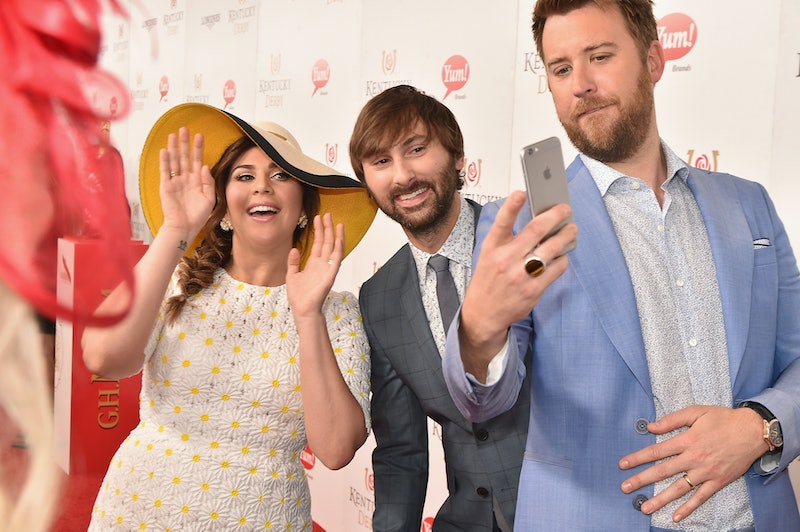 The 2016 Kentucky Derby continued the recent tradition of having popular musicians perform the iconic song when Lady Antebellum sang the National Anthem to kick off the race with a rousing rendition of the Star-Spangled Banner in the pouring rain. The band did their best to wow the crowd by breaking out an amazing a capella rendition during a downpour, but they were sadly upstaged by the rain (and the wind). Still, Hillary Scott gets extra props for not only nailing her performance, but also keeping her hat on in what was almost a Wizard of Oz situation. While the Grammy winning band definitely did an admirable job, if Twitter is any indication their performance will be remembered more for the panicked shots of the crowd running for cover than for their vocal prowess.

The singing of The National Anthem is a recent addition to the Kentucky Derby. Only seven artists and bands have performed the anthem at Churchill Downs since the tradition began in 2009. Lady Antebellum had a hard act to follow after Josh Groban took the stage in 2015, but the trio gave it their all. Groban didn't have to contend with bonkers weather though. Given the conditions, the band did their best and they hit all their notes — it's just so much more fun to take in the sight of hundreds of people scrambling to pop their umbrellas all at once.

The band's fans are being supportive though. As this Twitter user noted, the band may have a major fan upstairs.

Some viewers were less kind though. Like this Twitter user who isn't sure who Lady Antebellum is...

Meanwhile, southerners understand sudden downpours happen, and to be honest the group handled it like total pros. It takes more than a two minute torrential downpour to keep a country band down.

This Lady Antebellum fan makes a good point because honestly the crowd had zero chill.

Finally, this tweet basically sums up the performance perfectly.

Before Lady Antebellum only one other group has been asked to sing the National Anthem for the Derby so far and that is their fellow country band Rascal Flatts who sang in 2010. No offense to Rascal Flatts, but, given the dramatic nature of Lady Antebellum's performance, they may have just set a new standard for any future bands who decide to sing the anthem at Churchill Downs. A little rain is nothing compared to a stellar performance — even when the audience is freaking out.