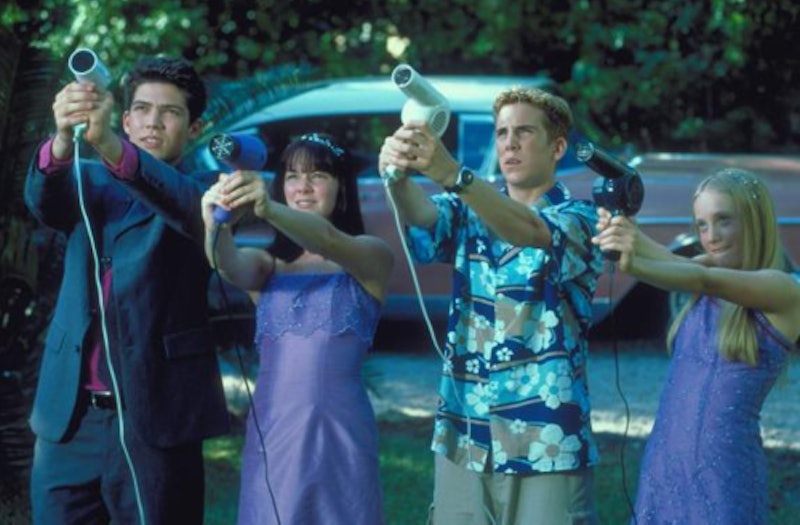 If you lived through any part of the '90s or the '00s, you probably love Disney Channel Original Movies (affectionately known as DCOMs). However, even the most hardcore fan cannot remember every DCOM. When Adventures in Babysitting premieres June 24, 2016, there will be 100 DCOMs in Disney history. That is a crazy amount of original movies about teens and tweens having misadventures, encountering aliens, and breaking into song. If you have seen every single one you deserve some kind of Mickey Mouse shaped medal.

From the very first DCOM, Northern Lights, which starred — I kid you not — Diane Keaton to Kirk Cameron's You Lucky Dog, the Disney Channel has released a few original movies that did not garner the cult following of High School Musical or Halloweentown. For better or worse though, these movies are all part of the DCOM canon, and it is time for you to rediscover them. Some of them are quirky, some them are just not as much fun as their more beloved counterparts, but they are all DCOMs.

Will you actually remember these 11 films or will they be totally new to you? It is time to take a trip down forgotten DCOM memory lane.

The first movie to be made under the official Disney Channel original movie banner bared little resemblance to the movies that would come after. Diane Keaton starred as a chain-smoking widow whose brother dies while rescuing a cat who is stuck on a telephone pole. She comes to town for his funeral and ends up with custody of a nephew she never knew she had. Depressing, odd, and very, very '90s what with the casual smoking and all, Northern Lights unsurprisingly doesn't get trotted out by the Disney Channel these days.

Kirk Cameron is a dog psychiatrist who can actually read the minds of dogs, but he loses his gift as soon as he is hired to read the mind of a dog who just inherited an awesome estate. A murder mystery ensues, and honestly... this movie sounds completely nuts. Clearly, Disney Channel was still experiencing growing pains at this point.

I honestly cannot imagine why Can of Worms is not considered a classic DCOM. It is a Halloween movie, and Disney always kills it with those, and it has a cool plot. A kid named Mike doesn't believe he belongs on Earth so he sends a plea out to the galaxies for an alien race to pick him up, and he ends up getting a ton of offers. This is one DCOM that deserves another look.

If you saw The Thirteenth Year, you have to remember it — it is the rare movie about a male mermaid (merboy?). It's hard to forget. Somehow, the story of Cody, a kid who discovers he is a merboy when he turns 13, just didn't stick with '90s kids the way it should have though.

This movie has a young Joey Lawrence (and Andrew Lawrence), but it didn't quite fit the DCOM mold. For one thing it is about a twentysomething character, so like Northern Lights, the demographic was a tad bit off. Still, the opportunity to see Joey work on a ranch really should not be missed.

Hey, Disney didn't just randomly start making superhero movies when they acquired Marvel. Sort of like a live action The Incredibles, this movie was a hilariously campy look at a super family.

Another alien gem that has been largely lost, this one focused on a young girl who just wants to be popular and keep her mom from marrying a guy from another planet. Normal teenager goals. Her future alien stepdad is cool though, and her future stepsister even cooler. I mean, she does protect her essence with some pretty stellar fashion choices.

The lesson of this movie was clearly "do not set your mom up on a date just so you can go to a concert." If you do not go through a better vetting process, you will end up with a vampire hanging out at your house all the time, trying to drink your blood. See, it's kind of like the story of a bad Tinder date, but with Caroline Rhea and more of a Dracula vibe.

Baby Tahj Mowry and Shia LaBeouf in the same movie? I have no idea why Hounded doesn't land on every DCOM favorites list.

Serious DCOMs never seem to be as beloved as their lighthearted counterparts. The Jennie Project has a little boy who feels neglected and a chimpanzee who knows American Sign Language. It was made to make you cry all the tears, so it makes sense that most people saw it once and then forgot it existed.

After awhile, all of the sports DCOMs that aren't Brink! or Motocrossed start to run together, but it's time to dust this movie about drag racing off for one very important reason: it stars Academy Award Winner Brie Larson.