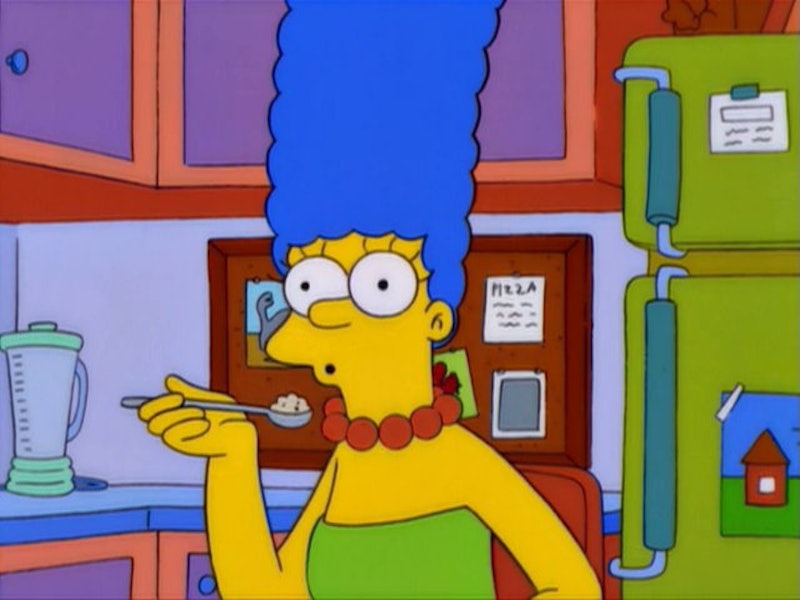 The Simpsons is an iconic show for a whole bunch of reasons. It's the longest running show in TV history with an astonishing 27 seasons so far; Time Magazine once named it the 20th century's best television series, and it even has its own star on the Hollywood Walk of Fame. And that's why I believe that The Simpsons is the one show you should watch with your mother, on Mother's Day and beyond. One of the less-often applauded aspects of the show is its depiction of motherhood through the character of Marge. While mom Marge Simpson has tried out a whole number of different careers, from bodybuilder to police officer to estate agent to a baker for an erotic bakery, Marge's full time occupation for most of the show is being first and foremost a homemaker and looking out for her family.

It's for this reason I argue that The Simpsons is the ideal show to watch with your mother. It's not so syrupy that she's going to think you're being sarcastic, but it is sweet enough on the feelings scale to give her a serious case of the warm fuzzies. Just like your mom, Marge is the glue holding her family together: she teaches her family the difference between right and wrong, carries about the family's finances in her enormous hair (maybe not so much like your mom, I'm hoping) and is, if anything, a little too conscientious when it comes to housework.

The episodes with a focus on Marge are often those that show how hard, heartbreaking and rewarding it is to be a mother all at once. So I'm not just going to suggest the show you watch, but the exact episode, because, if we're going to do this, let's do this properly. Season 7, Episode 11: "Marge Be Not Proud" is from The Simpsons' "Golden Age" (the first 10 seasons the show was on the air) and it's a real beaut. Spoiler: Bart is desperate for a copy of the video game Bonestorm, but his parents can't afford it. It's only a matter of time before he resorts to desperate measures: shoplifting. OK, no more (plot!) spoilers now.

It contains the immortal exchange between Bart and his mother "Tuck-in time is lame." to which Marge responds "Well, if loving my kids is lame, then I guess I'm just a big lame." This exchange seems to signify what being a parent is all about: it's like being in platonic unrequited love with another being for their whole life and responding to their sass with a whole lot of sugar.

It also contains a moment which feels very familiar if you ever fought with your mom as a kid (everyone with a pulse, raise your hand). While Bart and Marge aren't in each other's good graces, Bart goes round to Milhouse's to ask Milhouse's mother to "Tell me I’m good.” This brings it all rushing back: how much a mother's approval, no matter how cheeky and independent you were as a kid, ultimately seemed to matter when you weren't flavor of the month at home.

By the end of the episode, we realize the most after-school-special of lessons: that both Marge and Bart are learning from each other. And we also realize that for all Bart's professed dislike of it, Marge's coddling is what he draws strength from.

So if you're lucky enough to be in the same zip code as your mom, and she's into snuggling up and watching TV together, invite her over for a home-cooked meal and a serving of The Simpsons. I promise you won't be disappointed.