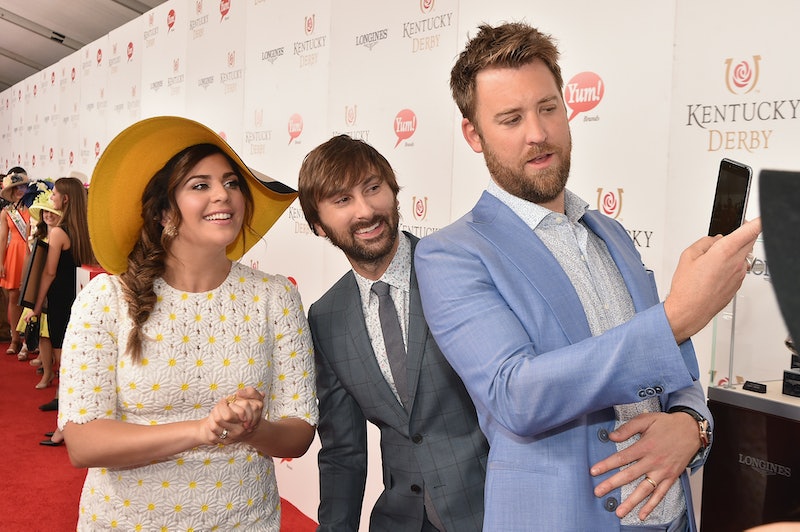 Nothing says "Let the fun begin!" like a casual, super-crazy downpour of rain, right? Well, that's exactly what happened when Lady Antebellum sang the National Anthem at the beginning of the 2016 Kentucky Derby. The weather at Churchill Downs has been nothing but sunny so far. All the Derby goers have been regaling themselves in the sun, sippin' on mint juleps, and chatting in the sweet seersucker suits. By all standards, this National Anthem business should have been a total ace-in-the-hole for Lady Antebellum. They're no strangers to singing the beautiful melodies of "The Star Spangled Banner." They've just finished up a massive tour, meaning this Kentucky Derby performance should have been totally smooth sailing. But, as you can see in this video of Lady Antebellum singing the National Anthem, that's not quite what happened.

The pearl-clutching moment of horror! Out of literally nowhere, the heavens opened up and buckets of rain pours out onto the Churchill Downs. Lady Antebellum, ever the seasoned professionals, didn't let this stop them. As for me, I was screaming at my television. How could this happen? How could the one critical moment — aside from the actual Derby — be marred by the appearance of a random shower? It was madness on the track and in the stands but Lady Antebellum valiantly continued. I couldn't have been prouder at their heroic efforts to keep the show going. Check out this magic:

This is just one of the many reasons that the Kentucky Derby is a truly magical event to witness. Aside from watching everyone jostle each other and avoid some major derby hat catastrophes, it's moments like that crazy rain that keep us coming back to Churchill Downs year after year.