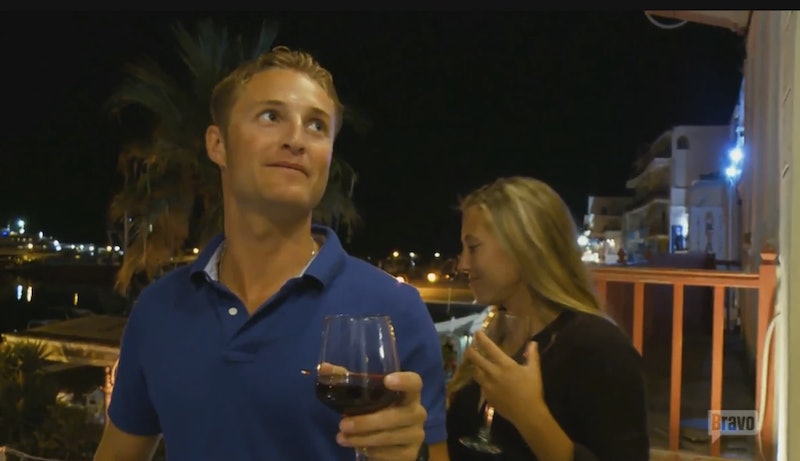 The Below Deck Mediterranean premiere packed a ton of drama into the series' first hour, with the most shocking moment by far coming when Jen, one of the deckhands, decided to show up to work nearly an hour late — a total faux pas for yacht charter workers. The person most affected was first mate Bryan Kattenburg, who told Bustle that Below Deck Mediterranean won't slow down on the drama anytime soon. When I ask about what's going to happen during the upcoming season, Bryan says "People stop being polite and they get crazy, and it’s just a very dramatic show, that’s for sure. More dramatic than any other boat I’ve ever worked on."

But that's jumping ahead a little bit — let's start with the events of the premiere. For Bryan, watching the first episode left him with one feeling: surprise. And he didn't even realize exactly what happened on that morning. "I didn’t know that Jen actually slept in 45 minutes," he says. "I literally took what she said to me, and I trusted her. This was only the second day in."

"In every job you have your ups and downs, you’re always going to have that. I wasn’t expecting the caliber of the unprofessionalism, or how unprofessional some of the crew were."

Bryan didn't think he was going to have to get quite so tough on his deckhands, but he says "there’s definitely going to be disciplinary action; there’s definitely going to be the captain having to come down and discipline people." That's one way Below Deck Mediterranean will be just like the original Below Deck. There might even be some plane tickets in this crew's future, though Captain Mark didn't quite strike the same fearful figure as Captain Lee. But according to Bryan, Captain Mark is "extremely professional, very calm demeanor, and a very reasonable and fair captain," so he could be willing to give Jen a second chance rather than kicking her off the boat for showing up late and not telling her superiors.

Overall, even though he seems to have a zero tolerance policy for the disruptive antics some of his crew members will get up to this season, Bryan understands why there were some hiccups. "Any season on any yacht, Below Deck or not, there’s always some kind of drama," he says. "Because it’s tough to live on a boat, not be able to leave it, and have to live and eat and drink with one another for so long."

But Bryan won't have to keep an eagle eye out for the whole season. After all, the best episodes of Below Deck always involve the crew taking the day off, going out for a few drinks, and getting themselves into trouble. And Bryan promises there will be plenty of sexual tension. "You can definitely say that there’s going to be romances on the boat … whether or not I’m involved in them you’ll have to see, I suppose."