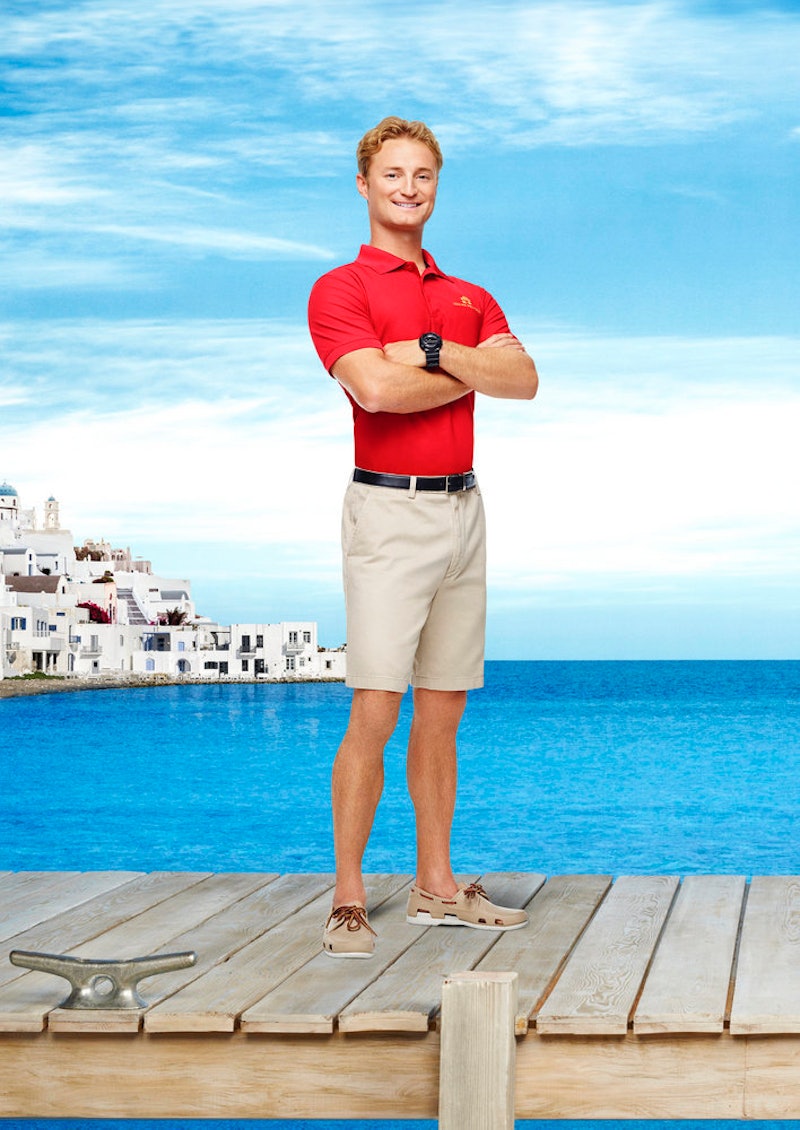 Below Deck Mediterranean got off to a wildly dramatic start, and after just a few days on charter, it seems like the crew is already at each other's throats. And when Bryan Kattenburg, first mate on the Ionian Princess, spoke to Bustle just after the show's premiere, he was able to paint a much better picture of what he is really like. Because when it comes to his role on the show, Bryan describes himself as "the enforcer" of the ship. On Below Deck Mediterranean , Bryan admits, "I kind of come across as the bad guy" when he has to bark out orders and dole out punishments over offenses like Jen's late start during the premiere. And the trailer for the rest of the season suggests that Bryan will have to get pretty strict with his crew in order to keep some semblance of order on the ship. He has high standards for his coworkers: in his words, "When you work on a yacht, you have people there to do a hardworking, honest job."

But he says that when the cameras aren't rolling — and when he doesn't have to act as the boss of a crew as unruly as this one — he's a totally different person. The same way any person is different when they're not at work, Bryan doesn't abide by the strict attitudes that he uses to push himself to succeed while at work. "I’m an easygoing guy who enjoys watersports and being outside, meeting new people, and socializing ... that’s who I am," Bryan says.

While he'll decidedly not click with deck crew members Jen and Daniel, whom he describes as "unprofessional" and "just not good people" because of the way they behave during the season, Bryan formed a tight friendship with some of the other crew members. "Bobby and Ben and I we call ourselves B-squared or B-cubed — we were awesome. We had a great time. We were really great friends," he says. "We were all mature and respected one another." During some of the downtime on Below Deck Mediterranean, maybe there will be a chance to get a load of this bromance. And a little bonding with Chef Ben can loosen anybody up, so prepare to see Bryan's softer side.

And as for why he's so serious when he's on duty? It's just how Bryan gets the job done. "When I’m in work mode, I get the job done, I work really hard, and I try to do things fast and I always look for the next thing to do. But when I’m off charter and not working, I’m extremely relaxed, and all I want to do is have a couple laughs," Bryan says. While Below Deck Mediterranean will feature a whole lot of Bryan's tough-as-nails "work mode," keep an eye out for when the first mate gets the chance to let loose — he might even participate in one of the many "romances on the boat" fans have to look forward to in the rest of the season.

More like this
Here’s How Much It Costs To Rent The St. David Yacht On 'Below Deck' Season 10
By Gretchen Smail
Kim K Is Putting Kanye’s Memorabilia — Like Grammys & Clothes — In A Vault
By Jake Viswanath
Khloé Kardashian’s Son Was Born A Week Before Anyone Realized
By Jake Viswanath
Kim K Reveals The Advice Demi Moore & Kendall Jenner Gave Her For A Runway Show
By Jake Viswanath
Get Even More From Bustle — Sign Up For The Newsletter