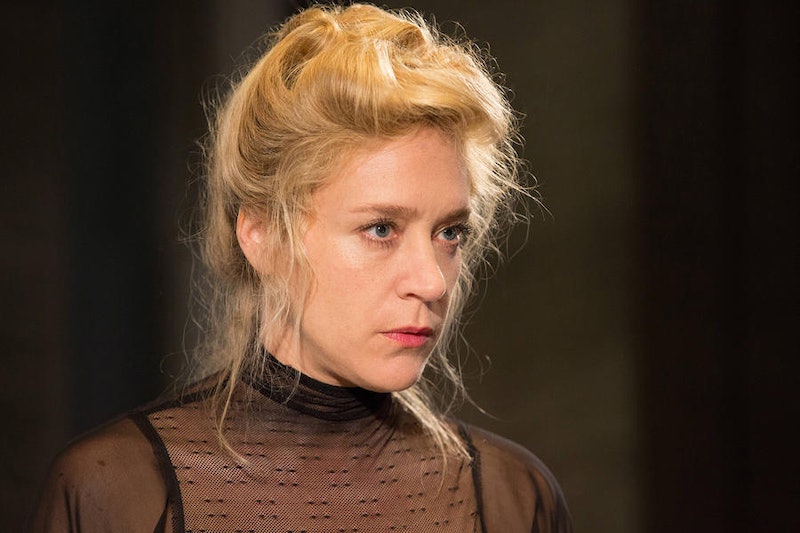 In the limitless and wonderfully wicked mind of TV King Ryan Murphy — the weirder things get, the better. Two-headed women and dildo-bearing addiction demons are just the tip of the iceberg that is the imaginative world of American Horror Story alone. This is why cast member Chloë Sevigny, who returned to AHS: Hotel after appearing on AHS: Asylum, has a bone to pick with her own Hotel character, Dr. Alex Lowe.

Sevigny joined the AHS family in the halls of the asylum, playing the provocative nymphomaniac and inmate Shelley, who becomes an amputee and subject of Dr. Arden’s (a psycho ex-nazi) experiments. Remember the playground scene? Because it’s burned into my memory forever. Sevigny knows this, though, and feels that her pediatrician character in Hotel just couldn’t live up to Shelley and her crazy.

“I wish I had a better character last season,” the 41-year-old tells Bustle. “I think what happened when I played Shelley was she made such an impact on Asylum, and she was obviously a very promiscuous character. I think [Ryan] wanted my character in Hotel to be the opposite of that, the antithesis, the good mother, the caring, the pure person.”

To me, Murphy and his team can do no wrong, and there of course was a method behind the madness. Or lack thereof. “He always likes to play with opposites, so I think he wanted to make her as far from Shelley as possible,” she says. “I think that’s why she turned out — I don’t want to say boring — but she definitely wasn’t as fun as the other characters, I’ll tell you that much. She wasn’t as wild.”

So basically, Sevigny’s problem with Alex was that she was just way too vanilla to hack it at Hotel Cortez. Incredible. Fair enough, but who would she want to play? “There’s just so much, his characters are so wild. What do you even come up with?,” she asks. “I think I would like to play someone really shy, but then has some sort of big turn. It’d have to be really extreme. Or someone really transformative. Something underlying.”

I think you’re onto something, Chloe. And the best news is, she’s totally game to come back for next season, and the season after that —and after that — because let’s be real, they’re surely coming.

“Sure, yeah!,” she claims. “I love everybody there and I think [Ryan’s] one of the greatest forces in television today.”