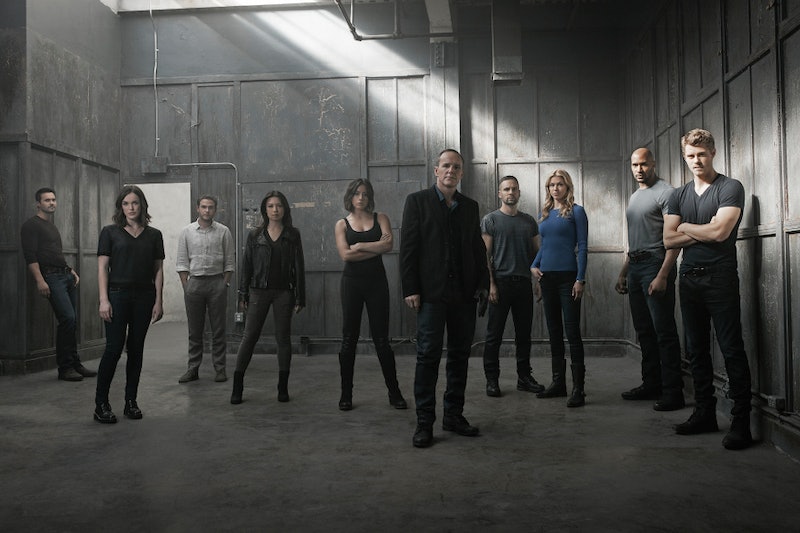 The final four episodes of Agents Of S.H.I.E.L.D. Season 3 are being billed as a self-contained mini-arc of sorts, complete with its own subtitle: "Fallen Agent." This will presumably culminate with the revelation of who exactly was in that exploding spaceship that we've now seen twice: first in the flashforward that opened the midseason premiere back in March, and then in the vision that Daisy received when she was touched by Charles, the Inhuman who could show people the future. So which character is the "fallen agent" in question? Who will die in the Agents Of S.H.I.E.L.D. Season 3 finale?

Fortunately, ABC has already narrowed it down for us. Thanks to both the subtitle of the arc and the artwork the network has used to promote it, we know that the character will be an active agent of S.H.I.E.L.D. That limits the list of potential victims to only nine. Will it be one of the Secret Warriors? Will it be (*gasp!*) one half of FitzSimmons? Will it be Daisy herself? Or will it be somebody none of us will see coming? As we draw one week closer to the epic two-hour finale, let's rank all nine possibilities — plus one wild card — in order from least to most likely to kick the bucket… starting with Hive himself.

ABC isn't advertising Grant Ward as one of the potential victims — which is exactly why there's at least a small chance it could be him. In the comics, it has been proven to be possible to remove Hive without killing its host. Perhaps the season will end with the parasite somehow being removed from the former agent, giving Ward just enough time to find redemption by sacrificing himself to stop the ancient Inhuman. Is this scenario likely? No. But possible? Sure.

Pretty much the only clue we have to the victim's identity is a cross necklace seen floating in the spaceship shortly before it explodes. That's obviously the necklace that Elena Rodriguez is always seen wearing — so obvious, in fact, that ultimately the victim can't possibly be her, right? Not to mention the fact that, prior to the two-hour finale, Yo-Yo will have been in exactly three episodes, killing her off wouldn't exactly live up to the hype ABC is building around this storyline.

Joey was the first openly gay character introduced in the entire Marvel Cinematic Universe, predating Jessica Jones' Jeri Hogarth, so killing him off would lean dangerously close to the problematic "Bury Your Gays" trope. Joey has also been in twice as many episodes as Elena — but that's still not nearly enough to make his death impactful for viewers. Unless this arc is building towards a major cop-out, the writers won't be killing off either of these recurring characters; rather, the victim will have to be one of the seven series regulars on this list…

Given the fact that Fitz and Simmons finally consummated their relationship after three years of will-they-won't-they tension, it wouldn't be surprising if the show killed one of them off for dramatic impact.. But AoS has done the whole "separating FitzSimmons" things before — twice, actually — first with Fitz's traumatic brain injury and then with Simmons' unscheduled trip to Maveth, so doing it a third time would just feel repetitive. Plus, now that these two have officially gotten together, there's so much story left to tell about where they go from here. Add to that the fact that the uniform worn by the victim implies that he or she is a field agent, and I think it's safe to scratch this pair off the list.

It's easy to see a potential arc here similar to the one outlined for Ward above: the agent who betrayed her team regains her senses just long enough to sacrifice herself to save them. Could the death Daisy foresaw be her own? Maybe… but probably not. The Agent Formerly Known As Skye has been integral to the show since day one — arguably a more central figure than Coulson given the amount her character has changed and developed over the years — and she has far too much story left to tell to lose her now. Namely: how will she cope with the guilt, knowing that her actions caused the death of one of her team members?

Will Season 3 be the last ride of the Cavalry? May has been a mother figure of sorts to Daisy, so it's conceivable that she would ultimately sacrifice herself to save the brainwashed agent. But if the best barometer to measure these candidates by is how much story they have left to tell, then you'd have to disqualify May as well. The whole Andrew/Lash storyline remains unresolved, and it's hard to imagine May's time on the show ending before getting some closure in that department.

You know who doesn't have much story left to tell? Lincoln. AoS has struggled to find a meaningful storyline for this Inhuman in Season 3; he has never meshed well with the team and his only contributions are wrapped up in a relationship with Daisy that has never felt fully-realized. Plus, we learned last week that Lincoln has something of a death wish, when he recklessly consumed the cure that FitzSimmons were working on. With his immune system compromised, Lincoln may be on the verge of death already, so it's not a stretch to imagine him stepping into the line of fire in order to save Daisy. So why isn't he higher on the list? Because something about it feels too predictable.

Yo-Yo may be too obvious a candidate, but if she's not the one to die, then we still have to explain how her necklace ends up on the exploding spaceship. In her short appearance on the show, the S.H.I.E.L.D. agent she has grown closest to is undoubtedly Mack. If she gives her necklace to him during the finale as some sort of talisman, then Mack will have a big ol' target on his back. Agent MacKenzie is a likable enough character, but outside of the brief subplot involving his brother this season, he's never really had that many storylines of his own. All of this means he'll probably be the one to die Unless…

Can you imagine the outcry if AoS killed off Coulson? That outcry is exactly the reason why I think they might do it. Although the show has already been renewed for a fourth season, its ratings have never been stellar — and it could use an attention-grabbing twist if it wasnts to survive past Season 4. Given the fact that Agents Of S.H.I.E.L.D. began with the resurrection of Phil Coulson, his death would certainly qualify as a shocking blow.

It may be hard to imagine AoS without the director of S.H.I.E.L.D., but out of all the characters, Coulson actually has the least story left to tell and — even more importantly — his death would open the largest number of storylines going forward. Just think: Coulson singlehandedly started the whole Hive debacle when he committed the cold-blooded, vengeance-driven murder of Grant Ward. It makes dramatic sense that he would be the one to ultimately pay the price for it. And his death would have major repercussions for Daisy (who would have to cope with causing the death of her father figure), May (who would probably have to fill in as the new director of S.H.I.E.L.D.), and literally every single team member.

The Marvel Cinematic Universe has pointedly never referred to Coulson's resurrection in any of the big screen films; none of the Avengers know their former recruiter is still alive. This means that, despite how major Coulson's death seems like it would be, they could actually pull it off without having too big of an effect on the MCU at large. And if Coulson has to go, well… at least he got to live out his Captain America fantasies before he kicked the bucket.