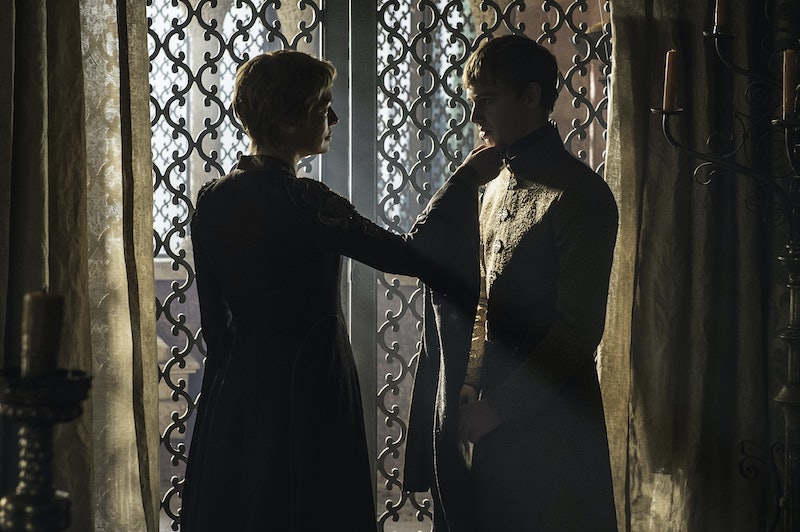 One thing that we probably don't immediately think of when Game Of Thrones comes to mind is the notion of touching moments of motherly tenderness. I especially don't place that kind of scenario anywhere in the same galaxy as Cersei Lannister. She mainly drinks wine from goblets and is deliciously evil, correct? Well, on Sunday, Game of Thrones celebrated Mother's Day by honoring Cersei as a fiercely loving mother when The High Sparrow had a pretty sweet discussion about the true bounds of a mother's love with the adorable King Tommen.

I know, it sounds like I am making this up but it really happened. King Tommen was at peak adorableness tonight when he stormed into the chambers of The High Sparrow and finally went to bat for his momma. He demanded that Cersei be allowed to visit Myrcella's final resting place and when the Sparrow refused, citing her unfinished atonement and need for a formal trial, Tommen became fiercely defensive of his mother and what she had already been put through.

As if the feels hadn't already become real merely by Tommen sticking up for Cersei, the Sparrow turned it up a notch by stating that although, "there is a great deal of falsehood in Cersei" he believes she's a pretty great mom. The High Sparrow gave Tommen a speech about a mother's love that Cersei would have been proud to hear. "When she speaks of you, the mother's love outshines it all. Her love for you is more real than anything else in this world because it doesn't come from this world," the Sparrow told Tommen. How true is that statement? If that doesn't want to make you call your mom, I don't know what will.

The Sparrow then went on to explain to sweet, young Tommen that Cersei had made that horrible Walk of Atonement all to get back to him because that's what mothers do for their children. And, for episode that aired on Mother's Day, it certainly was appropriate to honor one of Westeros' fiercest moms.