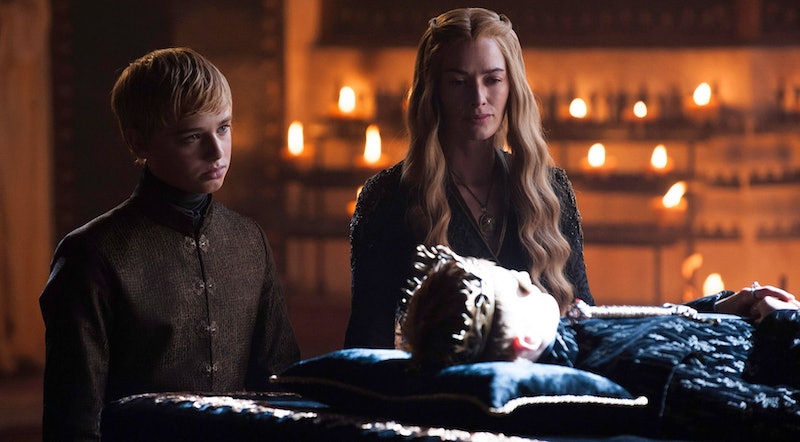 Game of Thrones' Cersei Lannister is known for a lot of things in Westeros. Notably, for being exceptionally cruel, vengeful, cold, and the mother to many golden-haired children with the last name Baratheon who are very obviously Jamie Lannister's offspring. But, controversial opinion: for all of Cersei's many, many, many faults, you can't say that she doesn't love her children. So, in honor of the actress behind Cersei, Lena Headey, welcoming her second child, let's take a look at the times Cersei went above and beyond for her kids — even if it did border on Mommy Dearest territory.

Cersei had a rough go of it in Season 5, to say the least. She started the season at the funeral of her father Tywin Lannister, and one by one, her last remnants of dignity and power were taken from her. We ended the season seeing her publicly humiliated as she was forced to walk naked through the streets of King's Landing. Doesn't seem like such a fun time to be big C.

Still, even though we have seen her manipulating them on-screen, Cersei really is fiercely protective of her children, Joffrey, Tommen, and Myrcella. The Queen Regent is merciless and brutal, and really doesn't give a damn, except when it comes to her brood.

1. When she sent Myrcella away

This might seem cruel at first, but who would want to raise a girl in King's Landing? It's not exactly the safest or friendliest place for a young woman to grow up — we all saw how Sansa Stark was treated, after all. The decision to send Myrcella to Dorne to live with Prince Oberyn was one for the best for her daughter. Plus, as we saw in Season 5, the sunny, sexy land of Dorne seemed wayyyy more chill than King's Landing.

2. When she mourned Joffrey's death

Obviously, it was a treat for viewers to see young Joffrey get his just desserts, but the way Cersei was absolutely wrecked by his death kind of dampened the mood. For whatever reason, Joffrey was her favorite, her baby boy, and he burst like a rotten blister. That can't be good.

3. And did anything for her son's vengeance

This was definitely one of Cersei's lowest points as a rational person, but as a mother whose son just died... you might be able to cut her a little slack. But only the tiniest bit, because she went pretty cuckoo bananas when she ordered that all dwarves be beheaded, in case they were Tyrion, who she believes poisoned and killed her favorite son. She'll really do anything to defend her family's honor.

4. And when she sent Jamie to get Myrcella back

Despite the fact that she was, for all intents and purposes, responsible for the death of Prince Oberyn (who was murdered by the Mountain in Tyrion's trial by combat), Cersei decided that after Joffrey's death, she couldn't have any of her children far away from her. She commanded Jaime to go to Dorne and risk his life to retrieve her. (Even though that went horribly awry, when Myrcella was poisoned anyway...)

5. When She really hated Margaery

And how does that make her a good mother, you might ask? Margaery Tyrell is a threat to Cersei Lannister, and the Queen Regent definitely knows it. Margery was first wed to Joffrey (who died before they could consummate their marriage, thank the old gods and the new), and now she's got a hold on Tommen. Cersei is suspicious of Margaery, and she rightly should be: the Tyrell girl who is now her daughter-in-law and her rival is using the Lannister boys just as transparently as their mom. Cersei hates the living crap out of Margaery, not only because she is the queen and has the power that Cersei so desperately is struggling to keep a grasp on, but because Margaery doesn't really care for Tommen (and she straight up hated Joffrey). Cersei doesn't want to see her kids being used; it's HER job to manipulate them.

6. When she defended her kids no matter what

Look, Cersei is no fool. She knows that Joffrey was not what you would call "A Good Kid," but she loved him anyway, because he was hers to protect, and she is, after all, a lioness. No matter how many mistakes her kids make, she'll defend them to the death (literally). And now that she's only got Tommen left, Cersei is gonna need all the strength she can get, or else she's gonna go buckwild and release her wrath on the seven kingdoms, and it probably won't be pretty. Hell hath no fury like a mother scorned.