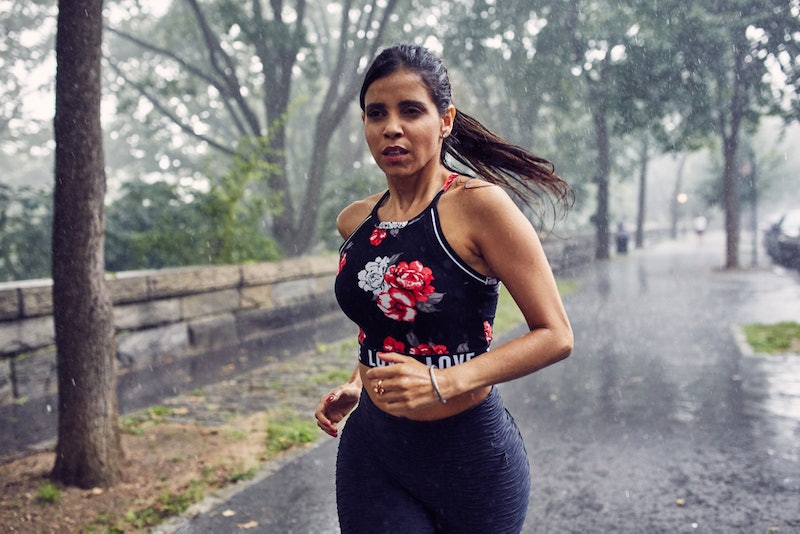 Though perspiration may sometimes seem like an evil trick perpetrated by an uncaring universe (especially when you're wearing a white shirt in the summertime), there are reasons why we sweat, and they go far beyond just helping us look shiny and vaguely burnished after 100 reps in the gym. Perspiration is a function of a complicated bodily system involving metabolism, temperature regulation, hormonal levels, blood flow on the skin and various other factors. It can also be triggered by medical or emotional issues (so, yes, you're not the only one; other people get the sweats when they're embarrassed, too). So far, so unpleasant-but-normal; but what's happening inside your body when it starts producing sweat at levels that seem excessive?

Excessive perspiration can manifest itself in several forms, and make you really understand how many sweat glands are on your body (unfortunately). Depending on the sweating symptoms, excess perspiration can be caused by anything from low blood sugar to pregnancy to thyroid issues to medication.

"Certain conditions, like diabetes, thyroid conditions, and menopause may cause excessive sweating," Dr. Christopher Dietz, DO, area medical direct of MedExpress, a network of urgent care centers, tells Bustle. It's important to realize that dealing with excessive sweating is not just a matter of cooling yourself down; perspiration is a complicated thing, and many different bodily conditions can throw it out of whack. You're not just producing a new natural lake under your armpits for the fun of it; with some medical investigation, you may be able to pinpoint a cause of your excessive sweating and possibly even treat it.

Do a bit of investigation (where do you sweat from? When does it tend to occur? What emotional or physical events happen beforehand? What other symptoms accompany it?) and keep those facts in mind while we explore some reasons why you might be extremely sweaty on the regular. Detective hats on, hand-towels at the ready.

This is one of the most common causes of excessive sweating, according to Mayo Clinic. The "focal" in the name refers to the focal points of the body where sweat shows up naturally, like the underarms, palms and face. It generally manifests as a symmetrical excess of sweat on the body (for instance, both palms, both soles of the feet, or both sides of the groin will produce too much perspiration). And don't worry — it's not a sign of nervousness or of serious illness.

So why does it happen? Unfortunately, science isn't entirely sure. People who suffer from it don't have more sweat glands, larger ones, or anything else in their sweat-making bits that could cause this malfunction. The current theory is that it's a genetically transferred problem in the nervous system that produces a sweat reaction when it's not actually needed. (It's known as idiopathic, indicating that we don't actually know how it happens yet.) The most common manifestation is armpits: one study found that 51% of people with primary hyperhidrosis in America had it under their arms. Fortunately, there are treatments available for the condition, including the use of very low electrical pulses, medications or even injectable neurotoxins to paralyze sweat glands. However, many people with PFH don't seek help due of embarrassment. But there's no need to be: if you're suffering from PFH and really bothered by it, know that there's help available.

Your glow may at least partially be due to a thin sheen of sweat that covers you at all times. "It's common for pregnant women to notice an increase in how much they sweat," Dr. Dietz tells Bustle. "That's because during pregnancy, women can experience hormone changes, increased blood flow, and higher metabolism levels, which all result in a little bit more sweat than usual." It's all perfectly normal, though possibly a little unexpected. But know that if you end up constantly mopping your brow during your baby shower, not to worry.

This is another potential cause of excess sweat among pregnant women: pregnancy kicks the thyroids of some women into overactivity, which is associated with high sweat levels. It can do the same to the non-pregnant too, though. Hyperthyroidism — the medical term for an overactive thyroid — means that the thyroid gland, which plays a large role in manipulating your body's metabolic rate, goes into overdrive, producing excess levels of the metabolic hormones thyroxine (T4) and tri-iodothyronine (T3). Your body's reaction to these hormone levels will be to speed up in basically all senses of the word: all your systems will be driven to work incredibly hard.

Sweating won't be the sole manifestation of this, though; people with hyperthyroidism often also find the condition is accompanied by rapid weight loss, jitteriness, tremors, fatigue and a quick heartbeat, as your body tries to cope with the hormonal "push." It may also be accompanied by an enlarged thyroid, or a goiter, on your neck. If you feel like you're experiencing any of these symptoms, book a doctor's appointment ASAP.

Perimenopause — the period of time just before the female body enters menopause and stops having a menstrual cycle — causes sweating for much the same reason as pregnancy: the body reacts to shifting hormonal levels. The hot flashes of perimenopause, however, are more widely known than the pregnancy sopping-wet-underarms. Shifts in estrogen have a direct effect on the body's temperature control settings, and some people may be more prone to flushed skin and the need to cool core body temperature, though science is not entirely sure why.

Heathline details three ways in which people with diabetes may experience excess sweating: one in response to low blood sugar, one in relation to food, and one solely occurring at night. The first is such an established symptom that diabetics are warned to check for sweat as a marker that their blood sugar has started to fall to unacceptable levels; the nervous system's trigger for sweating is signaled by low blood sugar levels. The second is rarer, and is called "gustatory sweating" because of its exclusive relationship with food; it's associated with serious diabetics who may have suffered nerve damage, happens exclusively around food, and is confined to the head and neck.

The third is the dreaded "night sweats," or nocturnal hyperhidrosis. And it's not purely related to diabetes; the National Health Service also ties night sweats to sleep apnea, infections or hormone problems, amongst other possibilities. But it's definitely an issue for diabetics, and tends to be a signal of low blood sugar due to the body's insulin regulation at night.

If you're on certain meds, they may be at the root of your sweating mystery. There's a class of medications known as diaphoretics, meaning that they cause excessive sweating in some people (and you may just be one of those lucky ones). The International Hyperhydrosis Society has a comprehensive list of these drugs, and many aren't associated with sweating in popular thinking — which is why it's important to carefully check possible side effects in medication advice. The list includes some pain medications, blood pressure and cardiovascular drugs, chemotherapy, hormonal treatments, anything targeting the endocrine system, some antibiotics, and many more; check the list out to see if there's a culprit in your medicine cabinet.

When you get anxious, you sweat; the body's panic response is installed to produce excess perspiration in the event that something threatens us. The experts at the Anxiety Centre have a comprehensive explanation as to why:

"Stress hormones ready the body for immediate action by changing how the body functions when danger is perceived. Part of this change includes increasing perspiration so the body’s water can be eliminated through the skin rather than through the kidneys — so that you don’t have to stop to urinate in the midst of defending yourself from or escaping harm. Another part of the stress response’s actions cause an increase in respiration and heart rate to shunt blood to the parts more necessary for emergency action and away from those that aren’t. This increased respiration and shunting action causes the body's temperature to increase. A second reason for increased perspiration is to help cool the body."

People who live with anxiety are therefore far more likely to sweat as a direct consequence of anxiety attacks, PTSD triggers ,and general anxiety. If you feel your anxiety has become dangerous or is keeping you from fully engaging with life, counseling can definitely help.

"Most of the time, sweating is perfectly normal while working out, in hot conditions, or right before a big sales pitch — but if you find it's interfering with your life, is really bothersome, or makes you feel insecure, talk to a healthcare professional who can help determine the cause of excessive sweating and offer techniques or treatments to help manage it," Dr. Dietz says.

This article was originally published on May 10, 2016