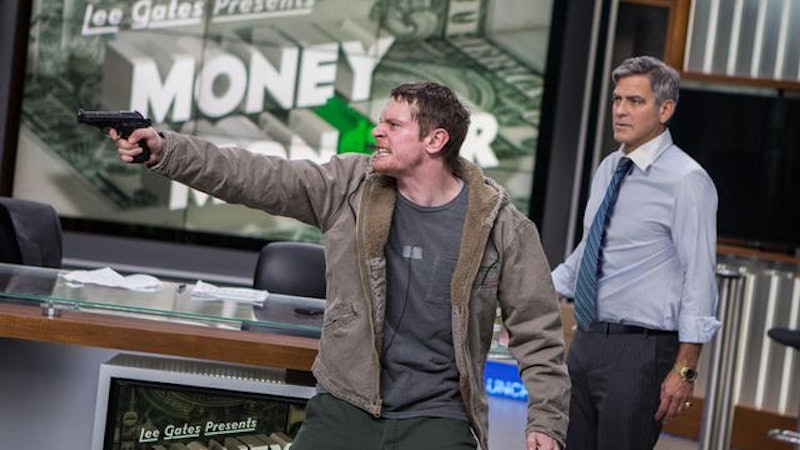 George Clooney's newest movie seems like something ripped right out of the headlines. Directed by Jodie Foster, Money Monster reunites Clooney with his Ocean's Eleven co-star Julia Roberts and tells the story of Lee Gates, a TV personality held hostage during his financial news show by a disgruntled viewer who lost his life savings as a result of Gates' advice. While the movie is a work of fiction, there are a number of recent events that seem to have influenced the plot, including the 2015 on-air murders of reporters Adam Ward and Alison Parker. The biggest inspiration for the film, however, might be real-life TV shows. M oney Monster is not based on a true story, but it does reimagine the impact of actual money-focused TV shows, such as CNBC's Mad Money.

Mad Money certainly seems like it could provide inspiration for Clooney's new film. The show features a host, Jim Cramer, who advises viewers on how to handle stocks and investments, similar to Clooney's character in Money Monster (Bustle has reached out to Cramer for comment, but has not heard back at this time). For fans of the CNBC show, it might be impossible to separate Clooney's character from Cramer's television personality, though the filmmakers have not publicly stated if Lee is based on any one person. Clooney does use all of the tools of Cramer's trade, however: props, manic camera angles, and cacophonous sound effects, made to entertain an audience throughout a finance-based show.

Yet, as said, Cramer might not be the inspiration for the film. The movie could simply be based on no one real event or person, but rather, the media and finance climates as a whole. As seen in the Money Monster trailer, Clooney's character eventually begins to empathize with the man holding him hostage, and the narrative begins to clue us into the fact that it might not be the journalists or viewers who are the problem, but the folks in charge of running the financial system. The film feels symptomatic of current distrust surrounding the financial sphere, and Clooney, at least, seems to get this completely. "When all these things go wrong, the little guy gets screwed, and I thought those were interesting themes," he recently said in an interview with Hollywood, seen below.

Ultimately, the movie seems to humanize finance journalists while "following the money" to the folks who are actual corrupting the system. Because we're in the middle of an election season where mistrust and media criticism are almost palpable, Money Monster's anxiety and action feel allegorical at best and too real at worst. The film evokes this cultural moment and uses it to create a tense but believable narrative, and while it's not a true story, the movie's plot plays with real attitudes and characters pulled straight from cable.