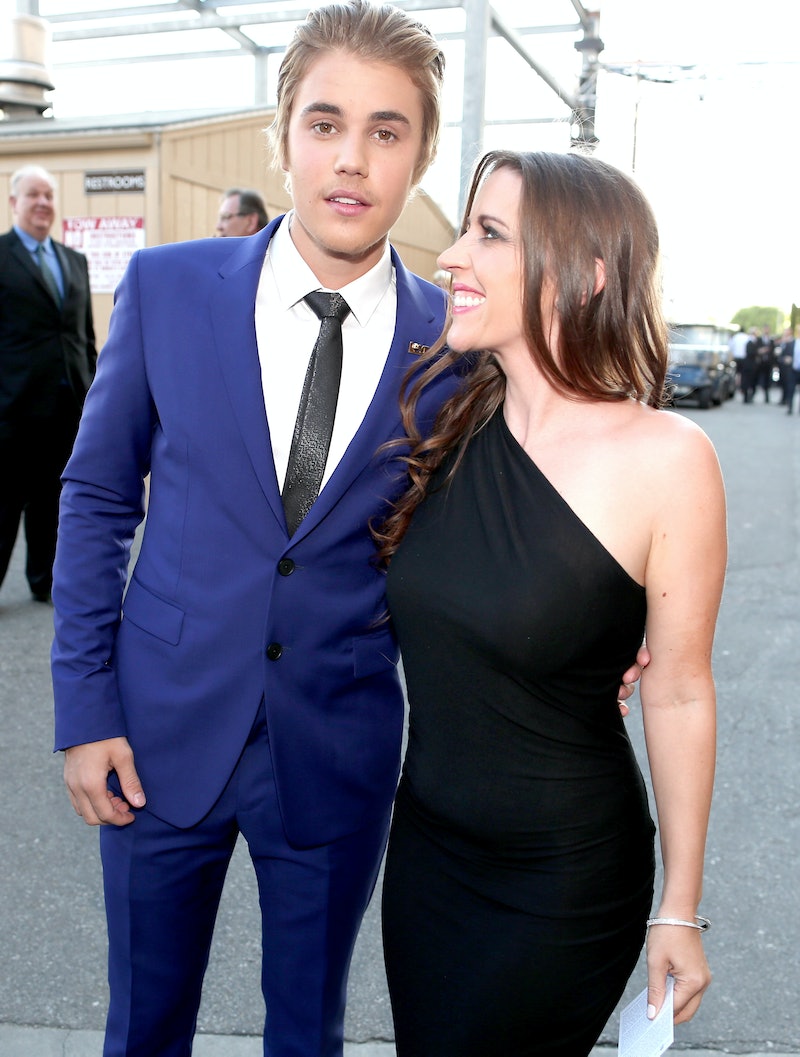 For fans who were surprised to hear of the fallout of Justin Bieber's relationship with his mom, rest assured that it seems like their relationship is improving. Like any good son who has done some questionable activities in the public eye and subsequently created a banger of an album to put himself back in good graces, Bieber called his mom on Mother's Day, Pattie Mallette revealed on Twitter Sunday (May 8). But that's not all: The "Sorry" singer, who was performing in Philadelphia on Sunday night, had the entire stadium of fans give a shoutout to Mallette — yelling "Aloha, Pattie!" for the Biebs' mom, who lives in Hawaii. Mallette (who gave birth to Bieber at 18 and has arguably been his biggest supporter throughout his career), was obviously touched by the gestures, tweeting her reactions to both.

"Yes @justinbieber was a good boy and called to wish me Happy Mother's Day!" she wrote on Sunday, presumably in response to the millions of Beliebers checking to make sure that he did. "I love that y'all are so concerned!! xoxo." (For his part, Bieber replied to that tweet with a simple smiley face. Classic Biebs.)

Mallette also tweeted a video of the crowd shoutout, writing: "Awwwwe!!! Thanks @justinbieber I love you so much that was so sweet! ALOHA EVERYONE! Xoxo."

It's a heartwarming exchange between the mother and son, particularly after Bieber revealed to Billboard in 2015 that he and Mallette weren't exactly on speaking terms for the past few years. (A shock of its own, TBH, since the two had always been extremely close and Bieber frequently cherished his mom in public.)

According to the Biebs, his relationship with his mom at the time was "pretty nonexisting. I was distant because I was ashamed," he said about his past behavior. "I never wanted my mom to be disappointed in me and I knew she was. We spent some time not talking, so it takes time to rebuild that trust. She’s living in Hawaii now, so it’s hard, but getting better. She’s an amazing woman and I love her."

Fortunately, it seems as if Bieber and Mallette have spent time working on their relationship — enough to warrant a "Happy Mother's Day!" phone call and stadium-wide shoutout, at least. And though we don't see what goes on behind-the-scenes, there have been other factors along the way that prove that the singer and his mom are once again on good terms — like when she flew to L.A. to see his Purpose tour show or when he tweeted his love for her on her birthday. And, of course, there was this achingly sweet tweet from Mallette to her son just last month:

Proving, of course, that in the "Love Yourself" lyric "My mama don't like you and she likes everyone," "everyone" now once again includes Bieber.