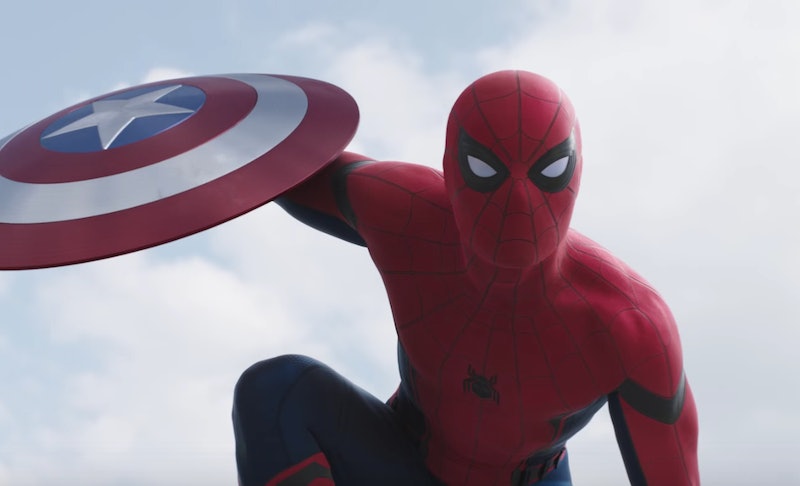 Tony Stark, I think we need to have a talk. I'm not going to lie to you: I am a Team Cap supporter to the very end, but when I walked into Captain America: Civil War, I was willing to entertain Team Iron Man. Tony has a point when he says that it's dangerous for anybody to act without accountability, though I'm not quite sure if the Sokovian Accords are the way to prevent that. Superhero business — the business of risking lives and sacrificing some to protect many — is not an easy one and it shouldn't be taken lightly. But, if you believe this Mr. Stark, why oh why did you decide that the best way to fight Team Cap was to kidnap a teenager? In his efforts to defeat Captain America, Tony basically kidnaps Peter Parker in Civil War , and it's really not OK.

Look, I get that in the Marvel world, getting Spider-Man to join in on the fight between Captain America and Iron Man is nothing but a good thing. Fans have been dying to see Spider-Man take his rightful place in the MCU, and introducing him in Civil War is exciting. Unfortunately, it's also creepy and inappropriate as hell. When Tony Stark goes to recruit Spider-Man to Team Iron Man in Civil War, he's perfectly aware of the fact that Peter Parker is a 16-year-old boy. Just because he has superpowers and likes to "fight for the little guy" doesn't mean that he's not a child. But, Tony doesn't care about that. He just wants to get Peter Parker a Passport (he doesn't even have a driver's license because he's an infant) and take him to Germany to fight in the epic standoff between Team Iron Man and Team Cap.

Not only does Tony take Peter out of the country, he also lies to Aunt May about it — she thinks he's there to offer Peter a grant for college — and bribes Peter with the promise of a new, high-tech suit. Just the fact that Tony sneaks a minor out of the country without the permission of his legal guardian, Aunt May, is shocking on it's own. Add in the fact that Tony dangles a new Spidey suit in front of Peter like a creepy man would a puppy to a little girl, and it's pretty horrifying. But the worst thing, by far, is that Tony doesn't tell Peter what it is he wants the web-slinger to fight for.

During the Team Iron Man vs. Team Cap battle at the airport, Cap asks Spider-Man what Tony told him about the fight. Spidey responds, "He told me that you're wrong, but you think you're right. And that makes you dangerous." So, nothing about the Sokovian Accords or any of the actual reasons why the Avengers are going to war? Not cool, Iron Man, not cool. Iron Man and Cap might not have been fighting to the death, but anything can happen in a superhero battle. And, yes, maybe Peter Parker should have asked a few more questions about the conflict he was stepping into, but he's a kid. Tony Stark is a billionaire, and a superhero — he is in a position of extreme power, and thus has untold influence over any young person like Peter. He should know better than to manipulate a teenager into risking his life for a cause he doesn't know anything about.

It would be one thing if Peter felt strongly that heroes shouldn't work outside government supervision, or if he had strong feelings about the status of the Winter Soldier, but he doesn't. The only reason he's in this fight is because Tony sweet talked him and seduced him with a new suit and the opportunity to fight with Iron Man. (Again: Peter is a minor.) Even if Tony had changed his mind and decided not to let Spider-Man fight against Team Cap, just the act of taking him outside of the country is a kidnapping already.

It's irresponsible actions like these that make Iron Man so difficult to like in Civil War . He says he wants to submit to the law, but he can't even go 24 hours without kidnapping a child to make his point. He's so caught up in his guilt for creating Ultron, he can't see that his actions to try to set it right are still reckless. In his guilt, Tony tries to take away everybody's agency, including Peter's.

In short: Spider-Man has no reason to be Team Iron Man, and Tony should no better. Bad Iron Man, very bad Iron Man.