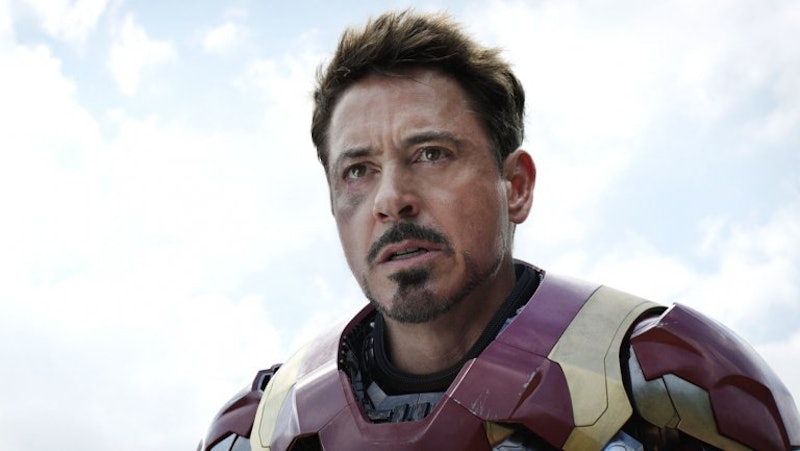 Marvel's newest film, Captain America: Civil War, certainly takes a toll on its heroes. Instead of doing battle against a clear villain like Loki or Ultron, the Avengers are fighting amongst themselves in Civil War, with the team split down the middle over whether they side with Iron Man or Captain America. The conflict creates a big problem for the Avengers moving forward, because even though no one is talking about it, how Civil War ends leaves nothing left for Team Iron Man.

Although the big battle between the teams basically ends in a stalemate, by the end of the film it's clear that Captain America wins; even though the movie never comes right out and says that. In fact, it almost comes across that Iron Man wins. After all, he has the law on his side, and he's not in jail/a fugitive like the entirety of Team Cap. Plus, after the fighting is over and Tony Stark and Steve Rogers have gone their separate ways, Stark receives a letter from Rogers telling him that the Avengers are all his, but Cap will be around if he ever needs him.

But then, the next thing the audience sees is Cap arriving at the jail were the members of Team Cap are housed (Ant-Man, Falcon, Scarlet Witch, and Hawkeye) as he is about to set them free. So it would actually seem that Cap has a pretty solid team of Avengers himself, despite his apparent generosity of leaving the team to Stark. And here's the coup de grâce: Cap basically left Stark an empty team. Sure, he told him he could have the Avengers, but four of those Avengers were left to rot in prison and won't be joining Team Stark anytime soon. As for the other five, the ones who fought for Team Iron Man in Civil War? Well, I don't see any of them suiting up alongside Iron Man either, and here's the reason why for each of them.

Widow actually defects to Team Cap during the battle. When Cap is about to make his escape with Winter Soldier, he is confronted by Widow. She decides to let him go, and even thwarts Black Panther's efforts to stop them. Later, after the battle, she has a conversation with Stark where he basically tells her that she'll be going to jail as well for her insubordination. She tells him off and then disappears; likely having gone on the run.

Rhodes gets severely injured (by Vision, accidentally) in the battle and now can't even walk. He might be Stark's most loyal friend, but considering that he's currently relearning basic human functions after almost dying, he's not going to be much use as an Avenger.

Vision was almost inexplicably loyal to Stark in Civil War, and he paid the price for it. He is struggling with what it means to be human and with his developing feelings for Scarlet Witch, and these distractions led to him almost killing Rhodes. His guilt over this, as well as having to deal with his now fractured relationship with Wanda, indicate that he needs to spend some time figuring out who and what he is before he blindly follows Stark again.

Another Team Iron Man member who turned against Stark, T'Challa at least waited until after the battle to do it. By the end of the film he has returned to his home country of Wakanda to rule as its king, but he also does Cap a huge favor by offering to take in Bucky and keep him safe. Stark still wants Bucky in jail, or dead, so this move by T'Challa is a huge betrayal and clearly shows that he is now firmly a member of Team Cap over Team Iron Man.

Probably the only member of Team Iron Man who still likes Stark by the end of Civil War , it seems unlikely that Peter Parker will be joining the Avengers right away, and here's why: He's a 15-year-old kid. Stark seemed to show some remorse by the end of the battle as Parker was definitely hurting, and the billionaire told the young hero he was done — even though the battle wasn't over. It's kind of ironic that the death of a teenager is what pushed Stark to be in favor of the Sokovia Accords in the first place, and then to defend his position he put another teen directly in harm's way. So even though Spidey is probably willing, I don't think Stark will be calling on him to go on any dangerous missions; at least not until he's old enough to drive.

So at the end of the day, Tony Stark is left to wander around Avengers Headquarters all by his lonesome. Heck, he doesn't even have Pepper Potts to lean on anymore. So even though the law may be against them for now, I say that Team Cap can be marked as the clear victors in this Civil War.