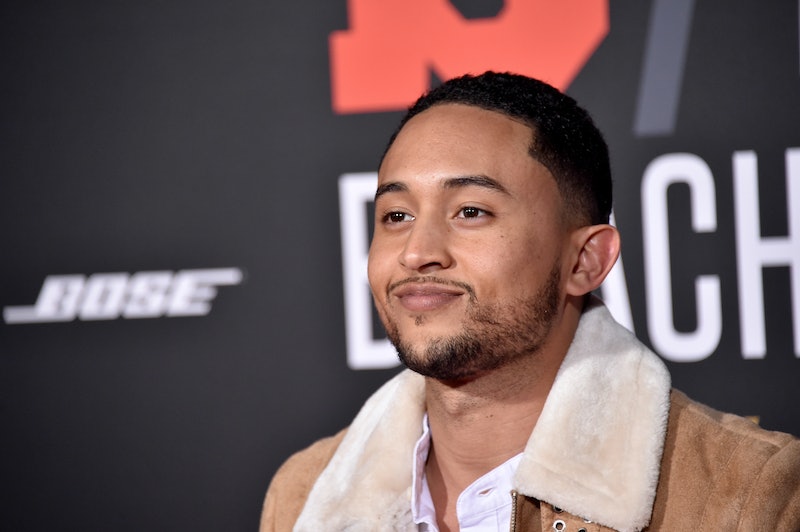 ou know that thing where you wake up out of a dead sleep and sit straight up in bed wondering what Tahj Mowry is up to now? No? Well that's what happened to me, because I realized I haven't kept good track of him in the years since his adorable little baby face was ubiquitous on all my favorite television shows. Well, first of all, he's not really "little" anymore; the former child star is 29 years old and still working — not to mention quite a hottie.

If you had eyes in your head in the '90s, you probably remember Mowry in his starring role as T.J. Henderson on Smart Guy, a sitcom that aired on the WB from 1997 to 1999. Or, if you missed that one, you had plenty of other chances to come across Mowry, whether on Full House, where he was featured as Teddy, Kim Possible, where he voiced Wade, or Disney Channel movies like Hounded and The Poof Point. Dude was everywhere back in the day.

Mowry has stayed firmly in the entertainment industry since then. He currently stars as Tucker Dobbs on the ABC Family Sitcom Baby Daddy, currently in its fifth season, so he's gone from playing a kid on TV to playing the best friend of the guy who's the "dad" in the show's title. As far as his personal life goes, Mowry doesn't have a child in real life, or even a girlfriend it seems. He was dating Erica Ocampo in 2013, but seems to be single now, in case anyone has noticed how handsome he's gotten since his Smart Guy days and wants to make a move.

Mowry has actually branched into music a bit, too. His debut single, "Flirt," was released in April 2015, with his EP following it a few months later in August 2015. So that's a fun new arena he's starting to try out, in addition to the work he's still doing as an actor on Baby Daddy. Mowry has always kept himself really busy, and it's exciting to see that he hasn't lost that tendency in adulthood.

Now feast your eyes on adult Mowry, in his video for "Flirt," and try not to focus on the fact that time is slipping away from us, and it's been almost two decades since he first went on the air on Smart Guy.

However, since the release of his EP, there have been no interviews saying Mowry is working on his next album, or an Instagram of himself in the studio — yet. I'm hopeful that this means he's keeping his next project under wraps, and we'll hear something from Mowry soon as far as future projects. But, in the meantime, we do still live in a world where you can catch Mowry on TV once a week; it's just on Baby Daddy instead of Smart Guy or Full House. So times have changed, but luckily not that much.