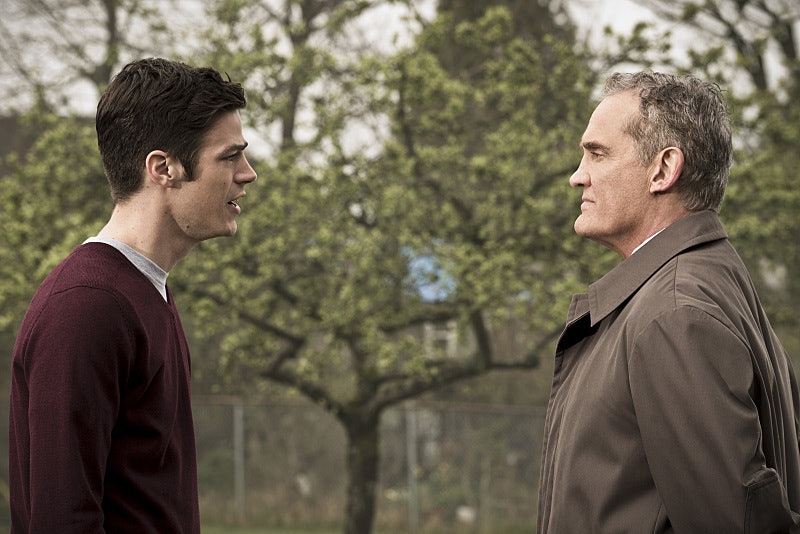 Thanks to the various flashbacks of Zoom's past, it became clear that Hunter and Barry shared a very important connection on The Flash . Their lives were almost direct parallels of each other, except instead of growing up in a loving home environment like Barry, Hunter was forced to grow up in an orphanage when his abusive father went to jail after his mom's death. (Nature vs. Nurture, basically.) However, there's a chance that their lives may be more intertwined than we ever could've imagined. In fact, it seems highly probable that Hunter aka Jay Garrick and Barry are actually related in some way.

During last Tuesday's episode, Barry went to go visit his dad, Henry Allen, for advice about whether or not to recreate the particle accelerator in order to get his speed back. At one point in the conversation he mentioned Jay Garrick by using his first and last name, something he apparently had never done in front of his father before, because as soon as he heard it, Henry took a brief aside to comment that his mother's maiden name was Garrick. (Dun dun dunnnn!!!) Surprisingly, neither Barry nor Henry found this coincidence to be very interesting for some crazy unknown reason, but viewers (myself very much included) immediately took notice and started theorizing what this could mean.

The fact that the writers made a point to have Henry mention this at all proves that it will eventually be a vital piece of information down the line. After all, it's never been explained why Hunter Zolomon used the name Jay Garrick. Perhaps he got the last name from a relative, which would mean that Barry and Jay share more than just super speed — they also share some prominent DNA. Then again, there's always the on-going possibility that Jay is actually a different person from Hunter, who simply stole the name to hide his true self. (A preferable option since that would mean Barry isn't related to Zoom himself.)

But a part of me wonders if this mystery could be connected to the other big mystery this show has introduced: the identity of the man in the iron mask. Ever since he first made his debut on the show, fans have wondered not only who he is, but why Zoom has been keeping him hostage. Now knowing his potential connection to the Garrick-Allen family tree, I'm more suspicious than ever that Earth-2 Henry Allen is the one underneath that mask. It would certainly help to explain why he's been kept a prisoner and not killed.

The only reason Killer Frost was able to live as long as she did was because she looked exactly like Caitlin, whom he greatly cares about. Maybe the only reason this Iron Mask guy is alive is because he's actually a relative. And despite his many villainous tendencies, perhaps even the likes of Zoom can't bring himself to murder a family member. Plus, it'd just be a great way to connect these two separate plot twists and possibly make it that much harder for Barry to take Jay down for good.