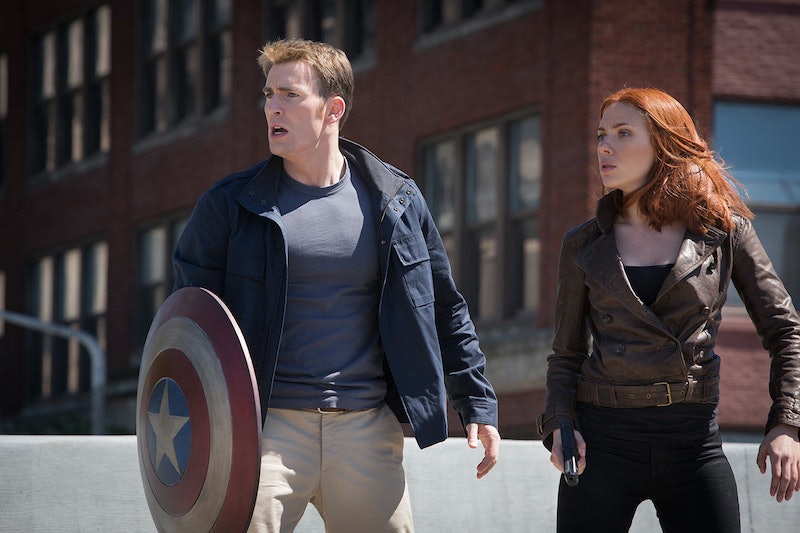 It's not that Captain America movies are particularly feminist, or that other superhero movies aren't. But the fact that Cap has never been forced to choose between saving a bus full of children and a girl he likes (à la Spider-Man), for instance, is notable. Even more notable is the fact that all the women in the Captain America trilogy have been Cap's peers. In The First Avenger, Steve Rogers falls for Agent Peggy Carter, who is already serving her country and fighting on the side of the Allies when she meets him. Over the course of the movie, the two enjoy a nice flirtation, and eventual love story, but it's all grounded in a mutual respect. And despite both their lives being on the line throughout the film, Cap is never put in a position to rescue Peggy from unspeakable evil. She fights right alongside him, every bit as strong and brave. Furthermore, Cap's love for Peggy is never portrayed as a weakness. If anything, it's a strength that pushes him forward.

In The Winter Soldier, Cap, again, isn't swooping in to save women from evil maniacs. The three main female characters in the movie — Black Widow, Sharon Carter and Maria Hill — are all agents of SHIELD, all warriors, and none of them are real love interests for Cap. Yes, (spoiler alert!) Steve and Sharon eventually get together in Civil War , but their romantic relationship is essentially little more than one awkward hallway chat in The Winter Soldier. And, again, Sharon never needs to be saved. If anything, her secret assignment to protect Cap for Nick Fury makes him the damsel.

Now, it's easy to look at other movies in the Marvel Cinematic Universe and say that they've done a pretty good job of escaping the damsel in distress trope, and for the most part, they have. But, the fact is that out of all the Marvel heroes who have starred in their own solo movies — Ant-Man, Iron Man, Thor and Captain America — Cap is the only one who hasn't played the knight in shining armor. It's surprising, given Cap's image, that of the all-American male, a man who comes from a time when women had only had the right to vote for 20 years. If anybody should be saving damsels left and right, logically, it should be him. Yet that's never the case for him, and the fact that his movies' filmmakers have resisted the classic trope is hugely significant.

The women of the Captain America movies show female audiences that women don't have to back down, or be victims, to be liked. Cap is attracted to strong women who challenge him, and, in most cases, can kick his ass. This might seem like a small victory, but put into perspective, it's really not. There is a huge lack of female superheroes in both the Marvel and DC universe (as well as a lack of great on-screen women in movies as a whole), so the women that are included in the franchise have a huge impact. Having several of them not be damsels, but rather be fully-formed, capable characters, in the Captain America movies is a major deal.

Part of the reason that the Captain America movies are so good is because they don't treat their women as shiny accessories. Even a beloved, strong character like Black Widow hasn't always been given the respect she deserves; remember how she was portrayed in Iron Man 2? So by keeping them away from becoming the damsel in distress, the Captain America movies have made women equal players, characters independent of Cap's romantic whims. Hopefully future Marvel movies, like Black Panther and Spider-Man: Homecoming, will follow suit.